Catholics are not the only religious group concerned at the Government’s failures and fiascos. Alan Austin reports.

THE LIST OF THE ABBOTT REGIME’S SINS, which Christian churches across Australia are denouncing in chorus, is growing steadily.

Since then, further wrongs have provoked the outrage of Catholics and Protestants alike.

What seems most offensive, however, is that those committing such clear violations of fundamental Christian teaching actually profess strong personal belief.

Such hypocrisy, according to all strands within Christendom, deserves special condemnation.

Several religious groups have sheeted home blame for this week’s loss of life on Manus Island to Abbott’s regime.

“The Church is deeply concerned about the death of one asylum seeker and the injury of so many others. Sadly this tragedy was both predictable and preventable. The Australian Government has placed vulnerable people in a situation where their basic needs are not being met.

“These individuals have fled violence and horror in their homelands – and have now been exposed to it yet again as a direct result of Australian Government policies.”

Former diplomat Tony Kevin, in the Jesuit journal Eureka Street, said the Government is prepared to break any rule or relationship to ‘stop the boats’:

‘The Coalition's message is brutal and clear: we will stop the boats. To do this we will break international maritime and refugee laws, jeopardise Australia's relations with Indonesia, and stand at arm's length and watch as major avoidable violence and human rights abuses take place in PNG. Because all this bad stuff reinforces the deterrent message we are utterly determined to keep sending.’

The Coalition has thumbed its nose at international law according to Elenie Poulos, the national director of UnitingJustice Australia, speaking in a press release:

“The warehousing of asylum seekers in inadequate facilities in these offshore centres is entirely unacceptable. It is a breach of our obligations under international law and diminishes us as a nation.”

‘All humanity shares the honour of being made in God’s image. We’re therefore indelibly marked as precious … This must shape our treatment of asylum seekers.’

Earlier this month, the Australian Churches Refugee Taskforce told a parliamentary joint committee on human rights that the government's proposed changes to immigration laws were unacceptable.

Chair of the taskforce – which represents 16 denominations – Anglican dean of Brisbane Peter Catt claimed the amendments would give Immigration Minister Scott Morrison too much power:

“This proposed situation, in which the minister may be required to 'play God', is relatively unique or rare amongst ministerial portfolios and decisions. If the minister gets it wrong the consequences could be dire for the individual.”

The churches are not just appalled at the disastrous outcomes in death and injury, but at the blatant hypocrisy — a particularly grievous Judeo-Christian sin.

“From my [biblical] faith I derive the values of loving kindness, justice and righteousness, to act with compassion and kindness, acknowledging our common humanity and to consider the welfare of others; to fight for a fair go for everyone to fulfil their human potential and to remove whatever unjust obstacles stand in their way.”

In 2012, Treasurer Joe Hockey, a professing Roman Catholic and son of a refugee, got so worked up over the case of a 13-year-old unaccompanied child, he allowed himself to openly weep in Parliament:

“But I will say one thing deliberately to this parliament. I will never ever support a people swap where you can send a 13-year-old child unaccompanied to a country without supervision — never! It will be over my dead body. How dare people!”

Now in power, Morrison has made it explicit that the policy of the Government of which Hockey is a living, breathing part is now precisely that — to send children, including those with no family, into incarceration on the Manus Island or Nauru offshore detention hellholes.

It’s enough to make one weep — but not Joe Hockey; not now.

Ten unaccompanied children were sent to Nauru on Monday.

Rev’d Rod Benson is a Baptist ethicist and public theologian.

“Political leaders who publicly profess to be Christian, and to love God and follow Jesus, but who are drawn into compromise through identification with policies or actions involving evil or injustice should be called to account, and if necessary publicly rebuked by reputable Christian leaders for their lack of love and failure to follow the way of Jesus.

“Christian ethics unashamedly declares that Jesus is Lord and there is no reasonable excuse for the exercise of duplicity by political leaders who identify as Christian.”

Questions for the professing Christian Hockey are these: Was the choking voice in parliament in 2012 pure theatrics? Or has the power of high office corrupted what were once genuinely-held principles? Will you renounce your faith, or resign?

Abbott himself was nauseatingly hypocritical in his ‘Closing the gap’ statement in parliament last week, claiming:

This was uttered even as government agents were preparing to inform refugees imprisoned on remote islands, having fled persecution in Africa or the Middle East, that there would never be a place for them in Abbott’s Australia.

Tragically, the plight of refugees is not the only matter to have united churches in opposition to the Abbott regime’s harm and hypocrisies.

Racial profiling has been highlighted by some church spokespersons as Abbott’s team subtly fuels racist sentiment.

The government signalled in December it would weaken further the already anaemic sanctions against racial vilification. This prompted a concerted ecumenical effort which has continued since. An open letter was sent to Attorney-General George Brandis signed by 155 community and faith groups.

These included Catholics, Quakers, Anglicans, all the Uniting Church synods and assemblies and the Jewish B'nai B'rith organisation.

Urging the government to retain current laws, they wrote:

‘Racial hatred causes serious harm to individuals and diminishes us all as a community. It increases the likelihood of racial discrimination and racist violence … Any changes to the laws should only be undertaken with extreme caution and involve a comprehensive public consultation process.’

Each week, Gosford Anglican church added to the list, as social media users are well aware (see below).

“Christians have a responsibility for articulating courageous prophetic voices in the face of evil, injustice and violence. Failure to speak truth to power when the opportunity arises is an abrogation of our citizenship of both the kingdom of God and the socio-political spheres in which we live from day to day.”

“Jesus knew that there was a place for everything and it’s not necessarily everyone’s place to come to Australia.”

But increasingly, however, followers of Jesus in Australia are of the view that it’s not necessarily Tony Abbott’s place to be prime minister. 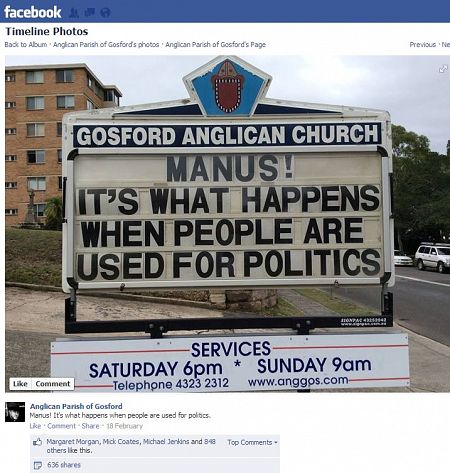 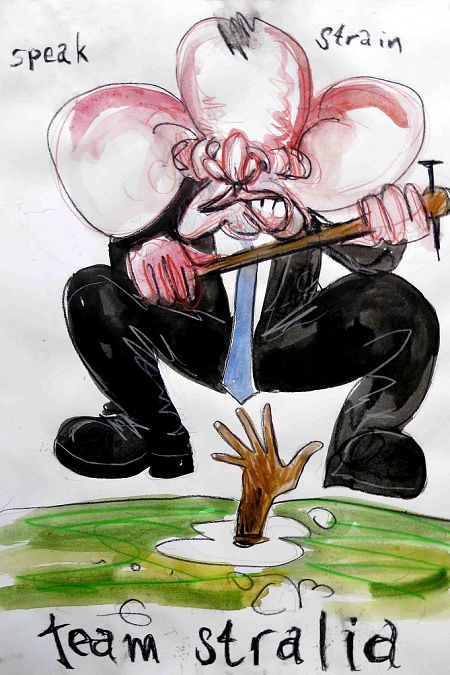