Why has The Age consistently promoted an anti-union view in its coverage of the Victorian branch of the United Firefighters Union of Australia attempts to secure an Enterprise Bargaining Agreement that puts safety first? Firefighter EBA Truth reports.

BY COMPARISON to the hysterical partisanship of Murdoch’s tabloids, the Fairfax dailies often seem quite reasonable. This veneer of reasonableness fosters a level of trust in the journalistic integrity of the Fairfax dailies that frequently turns out to be unjustified by a more careful reading.

A case in point is the long-running dispute over the proposed Enterprise Bargaining Agreement (EBA) for paid firefighters and officers of the Country Fire Authority (CFA). The dispute around the CFA EBA was intensely political from the outset, which has essentially placed the fate of firefighters and the public in the hands of the media. Australian political press galleries tend to treat politics as a kind of gladiatorial sport, in which the media adjudicate and commentate for the entertainment of their paying customers. The reality, however, is quite different, in ways that are particularly important in the context of the CFA dispute.

Firstly, politics is not a game. Political decisions and political disputes have potentially severe real-world consequences. Secondly, the media are not dispassionate, objective commentators to the game. They are participants. In our electoral “democracy”, public relations (propaganda) is everything and the primary propaganda outlet for all political operatives is the media. The extent to which media outlets allow PR point-scoring to happen is the extent to which the proper functioning of democracy is thwarted.

Meanwhile, everyone keeps cheering the views of the fmr CFA Board, which fought tooth and nail in court to renege on staffing commitments. https://t.co/zV8HMNVXcL

In the case of the CFA dispute, Fairfax’s bias mainly takes a subtle form that is hard to spot: omission. The Age’s most recent outing on this topic follows that script. Reporting on a fairly opaque development that even leaves most firefighters scratching their heads, state political editor of The Age Josh Gordon offers this in the way of background to the dispute:

The agreement has already led to a string of sackings and resignations, including the entire board of the CFA and Jane Garrett from the emergency services portfolio. Critics claim the agreement will severely undermine the role of volunteers and give the union powers to interfere in CFA management decisions.

Since Gordon omitted to mention the union’s justifications for its claims in the agreement, readers are led to draw the conclusion that no valid justification exists. This mode of editorialising by omission pervades nearly the entire output of The Age on the topic of the CFA dispute. It also frequently mars ABC News stories. Indeed, on some key developments, omission has gone as far as all outlets omitting to write anything at all!

Presumably, through such omissions, The Age expects the reader to jump to the same conclusions as the mystery author of The Age’s editorials on the topic, such as:

Apart from giving the Herald Sun a run for its money in terms of hysterical union-bashing, these editorials cite evidence that is contradicted by The Age’s own articles.

Furthermore, in common with all other emanations from The Age, they assiduously avoid the damning findings of the Fire Services Review and the Parliamentary Inquiry into the CFA Training College at Fiskville.

These reviews yield abundant support for the union position that the contested provisions in the EBA are a crucial protection for firefighters employed by fire services with a record of criminal neglect of workplace safety and a history of aggressively attacking consultation provisions.

What could explain The Age’s clear bias on this issue?

No doubt, there is some influence from the usual culprits for anti-union bias in the Australian media landscape: political partisanship and the pro-business doctrine of neoliberalism. After all, the Coalition decided to make a Federal election issue out of the CFA dispute and The Age explicitly advocated voting for the coalition.

But the CFA dispute hasn’t entirely played out on clear party lines.

As minister, Labor’s Jane Garrett staunchly opposed the union’s claims in the EBA. Indeed, I have argued, she deliberately suppressed the report of the Fire Services Review while embarking on a misleading anti-firefighter smear campaign, targeted not only at the public, but also at journalists. Her propaganda seemed to have hit its mark and to have maintained its appeal to Fairfax journalists, even after it was revealed that the CFA had engaged the services of an internationally notorious union-busting law firm under Garrett’s watch.

What gives? Why would Jane Garrett – a prominent figure of the Labor Socialist Left, with a long history of association with the CFMEU – be so hostile to the members of the UFU? Theories abound. Royce Millar and Ben Schneiders of The Age outlined two possibilities — that Garrett was plotting to undermine Daniel Andrews and that Garrett was making a principled stand against the union’s “outlandish demands”. The Age journos clearly favoured the latter.

Supposing The Age is right and Jane Garrett genuinely concurs with the view of Fairfax editorial staff that the union seeks a level of influence that is illegitimate, why would this be the case?

The answer, in my view, lies in the ideology of managerialism. Whereas the neoliberal response to any push for worker influence is “get stuffed, we’re the owners, not you,” the managerialist response is “get stuffed, we make the decisions round here, not you: you’re not qualified.” Where neoliberalism exists to protect and enhance the power of capital, managerialism exists to protect and enhance the power of those who hold positions of influence, not only in profit-motivated corporations, but in non-profit organisations, public sector organisations and government, all of which are remade in the corporations’ image. 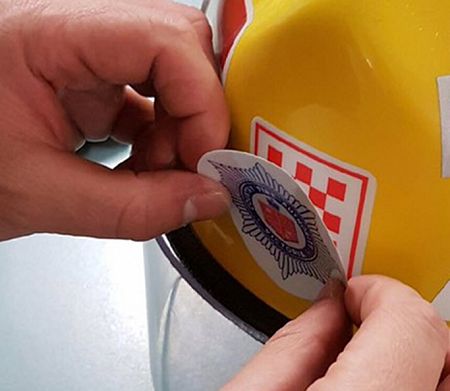 Since being corporatised, CFA and MFB each have two logos in use. The intrusion of corporate logos into the operational domain is symbolic of the invasion of managerialism and is actively resisted. Many CFA firefighters have taken to covering the corporate logo with the operational emblem of the CFA. Photo taken by a CFA career fighter who wishes to remain anonymous.

Across the board, the result is a power hegemony which "favours the autocrat and the bully", systematically depriving non-managerial workers of decision-making power and devaluing expert knowledge specific to the organisation’s core purpose. With its emphasis on business school doctrine over domain knowledge, managerialism forms a self-buttressing ideology, because critics are automatically discredited as unqualified. This applies not only to blue-collar workers but to non-managerial white-collar professionals, such as surgeons and professors.

Jane Garrett’s career path – union official, IR lawyer, ALP senior advisor, Left candidate for ALP national president, Yarra councillor and mayor, MP, minister, would-be Premier? – is notionally not that of a neoliberal, but is typical of the career politician, who views government as the management of society and politics as an opportunity for power as an end in itself.

The clear parallels between managerialism and political careerism were underscored by Garrett’s inaugural speech, which singled out for praise “exceptional” Yarra CEO Andi Diamond, who Garrett later appointed as chair of the MFB. People don’t engage in ladder-climbing without endorsing the legitimacy of both of the ladder and the rewards of power offered exclusively to ambitious climbers.

Why senators from other states allowed to make decisions about Victorian firefighters. That's not democracy. We didn't vote for 1 nation!

This is how it comes to pass that some of the political representatives of the labour movement tend to identify more with the bosses than the workers and, as we have seen in the case of the CFA dispute, to side with the bosses in their battle for absolute managerial prerogative, even when this clearly threatens workplace and public safety.

Managerialism was, in fact, addressed by the Fire Services Review, which recommended the abolition of the CEO roles and the reinstatement of Chief Officers with operational firefighting experience as the heads of MFB and CFA (cf Recommendation 13 below). The Government rejected that recommendation in its entirety, emphasising in response the need for ‘executive business leadership’.

In the same month the Government received the report, it promoted Joe Buffone to the role of chief officer of the CFA. Buffone has an MBA but has never worked as an operational firefighter. 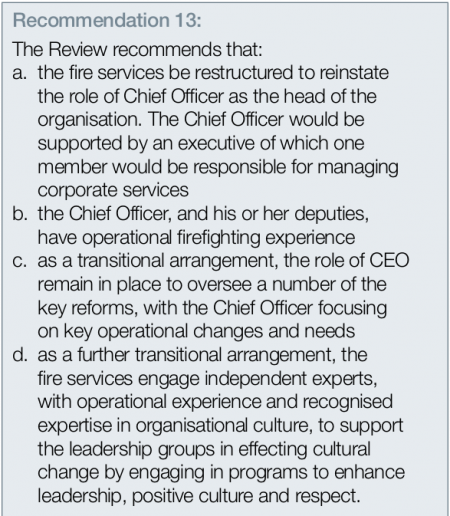 The ideology of managerialism explains why Jane Garrett came to be 'not contributing to the cause' of the Labor Party. It might also explain why The Age followed the managerialist lead of Jane Garrett and CEO Lucinda Nolan, misrepresenting safety-focussed consultation provisions as “veto”  and complaining hyperbolically that they would ‘surrender management control’ (charges since explicitly denied by the CFA’s new chief officer, 38-year CFA operational veteran Steve Warrington).

Senator, would you let volunteers run a hospital?
No, of course not.
Stop trying to grub votes off firefighters https://t.co/ZeZjzHJcgW

Managerialism not only deprives workers of influence, it also casts them as unqualified to comment on managerial practices. With this in mind, perhaps The Age systematically excludes the voices of 3,000 professional firefighters, not because it wants to suppress them, but simply because it deems them irrelevant. Regardless of the facts or the public interest, in their eyes, the only voices with rhetorical authority are those with institutional authority — the voices of senior management.

It stands to reason that The Age is beholden to managerialism. Those with editorial decision-making power are part of the managerial in-group themselves. In addition, journalists who are too close to their subjects tend to identify with them. Indeed, journalists, MPs and senior public servants make no secret of sharing a consensus outlook developed through mutual association, as I recently found out directly as a talkback caller to ABC 774.

After I laid out the factual evidence in support of the EBA’s consultation provisions, Raf Epstein began his rebuttal with

“Well, what they’re saying in the coffee shops of Spring Street is...”

EBA Truth is a firefighter, writing anonymously to protect his job. He thinks the paper’s bias is because its reporters are too close to the managerial elite and the politicians of Spring Street. You can follow EBA Truth on Twitter @ebatruth or on Facebook here.

Thank you @david_speers for the "What About Don?" interview. About *the only time* media have been a force for good re: CFA dispute. https://t.co/Ysk40i4lko

Dear media, we do have a democratic right to criticise you. Excellent piece from @ethicalmartini. https://t.co/Uc9SRAwj3d pic.twitter.com/I2DPjYTI5P