Probably 97 per cent of police act professionally toward protesters. But the other 3 per cent are armed and dangerous, and know that they're unlikely to be held accountable. Joshua Holland from AlterNet reports.

Occupations across the country have borne the brunt of some violent police tactics, and in a world where everyone has a camera-phone, a lot of their brutish behaviour has been caught in photographs and on video.

Police work is difficult and dangerous, and the majority of officers on the street behave like pros. When it comes to controlling crowds of angry protesters, they're often put into tense situations and ordered to do things they may not want to do by commanders who are far removed from the scene. I've witnessed a lot of restraint from cops, which of course doesn't make the news.

But being human, cops are also prone to fear and rage like everyone else. A minority of cops, like a minority of protesters, lose their cool in tense situations. The difference is that they aren't amateurs – they're well trained and have guidelines that they're required to follow. When a cop loses his or her cool, it can be terrifying. And when a protester exercising his or her right to assemble and speak is a victim of excessive force, it also violates the United States Constitution.

Unlike protesters, cops are also armed, and it's difficult to hold them accountable for their actions when they don't behave professionally. Most civilian review boards are toothless and ineffectual. But, as Donna Lieberman, executive director of the New York Civil Liberties Union told AlterNet last month, “public video recording has dramatically changed the landscape of police accountability, no question about it. It's a lot harder for police to sweep allegations of abuse under the rug when it's on video and on YouTube.”

Below are some of the most stunning incidents of police officers going wild on Occupy protesters around the country. To be fair, we don't always know the context in which these violent actions occurred – what happened in the moments before the incident was captured on camera. At the same time, when you look at these images, keep in mind that the rule of thumb in use-of-force cases is that police are prohibited from applying more physical force than is necessary to accomplish a legitimate law enforcement task. When they exceed that measure, they're committing a crime.

This now-iconic image was captured by The Oregonian in Portland on November 17: 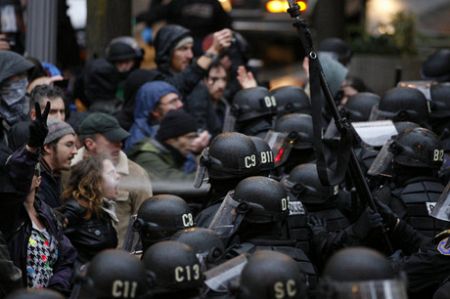 Now consider what legitimate law enforcement goal could possibly require an officer to disperse a chemical weapon directly into the face of an unarmed female protester at point-blank range? Though we don't know precisely what chemical agent was in that spray, those with allergies to capsicum can go into anaphylactic shock when exposed to pepper-spray. There's a reason these weapons are characterized as “less-lethal,” and not “non-lethal.”


2. Your Children Are in the Fray

In this video, a group of college students are huddled on the ground in a defensive position at UC Davis on November 18. An officer, later identified as UC police Lt. John Pike, then casually douses them with a chemical agent. You’ll note that a number of bystanders who were simply watching what was going on are also exposed:

Assuming the police had legal grounds to make arrests, it seems apparent from the video that little or no force was necessary to achieve that goal. The students are obviously not a threat to the officers. It appears that the heavily armoured riot police could have simply grabbed them and put them in flexi-cuffs had they chosen to do so. That means that this entire assault appears to be a perfect example of excessive force.

The most troubling part of the video, perhaps, is the way the officer identified as Lt. Pike flourishes the weapon, like a sommelier displaying a fine wine, before deploying it at the students.

Yet the video actually has an uplifting ending. The students displayed the immense power of nonviolence by remaining calm and then telling the heavily armed police that they will allow them to leave peacefully if they so desire. And the officers do just that, slinking away chastened, it seems, by the young protesters' resolve.

Via Twitter, Boing Boing’s Xeni Jardin reports that there were 10 arrests, and one female student was hospitalized for chemical burns.

I recently wrote about the case of Kayvan Sabehgi:

...after a rousing, peaceful day of demonstrations culminated in the Port of Oakland being “occupied,” things once again became violent on the streets of Oakland. During that action, Kayvan Sabehgi, also a veteran of the Iraq war, ended up in intensive care with a ruptured spleen. Sabehgi told the Guardian that he was walking alone, away from the action when he ran into trouble.

What stands out in the video is that Sabehgi is merely walking backward as he talks to a group of riot police. He doesn't pose a threat, and no discernible law enforcement goal is served by attacking him — the police appear to be acting out of anger. But let's say, for the sake of argument, that they had a legitimate interest in getting him to move out of the street. After the first two baton strikes, that goal is achieved: he runs to the sidewalk. After that point, the subsequent blows appear to be unnecessary and excessive, and they sent him to the hospital with a severe injury.

Here are two videos depicting the same scene from New York City on September 24. There are a couple of things that happen here that are worth noting.

In the first video, police appear to be dragging protesters who don't look like they pose a threat into the street and arresting them.

At 4:35, a citizen demands that an officer furnish his badge number and gets no response. According to NYPD's own rules, “The New York City Police Department Patrol Guide, procedure 203-09 (Public Contact—General), states that officers must 'give name and shield number to anyone requesting them.' New York City’s Office of Administrative Trials and Hearings ('OATH') has issued a number of recent opinions that examine what this patrol guide procedure requires of officers. In essence, these cases have held that the patrol guide procedure imposes an 'affirmative obligation' to 'give name and shield number to anyone requesting them'; In other words, a demand for a name or badge number demands an 'affirmative response.'”

The short video below shows the same arrest of the man holding a flag depicted toward the end of the previous one.

It's clear that the officers target him out of anger; shirtless, he obviously doesn't possess a weapon or represent a threat. It appears that a “white shirt” is simply infuriated by him holding up the flag and shouting, “Is this what you're about?” After being taken down roughly, an officer holds down his neck with a knee, and then gets up and punches another protester.

Police are trained not to respond to verbal insults — citizens have a constitutional right to say even very rude things to police officers.

The media, by and large, accept the premise that police are justified attacking a large crowd of peaceful protesters with pepper spray or teargas if one or two become violent. It's an odd belief — imagine if the same tactics were applied to drunken fans at college football games.

“Crowds of protesters are heterogeneous,” ACLU of Northern California staff attorney Linda Lye told AlterNet recently. “They simply cannot deploy these weapons against a whole group of people because a few of them throw some objects.”

This is another image, courtesy of the AP, that's fast becoming iconic – it shows 84-year-old Dorli Rainey, a retired schoolteacher, being helped after receiving a blast of pepper-spray by Seattle police on October 15.

A woman who was three months pregnant was also reportedly sprayed that night, requiring hospitalization. This was reportedly a response to a single protester throwing an “unidentified liquid” at a police officer, who was unharmed. This picture shows that the police response was broad and indiscriminate, hitting not only those who may have been aggressive but also protesters like Rainey, who couldn't possibly represent a threat.

Here is a similar scenario out of Denver, courtesy of the local NBC affiliate.

At around 1:30, the reporter says that, according to protesters, “police escalated the situation.” It's an important point. Overly aggressive police tactics are infuriating, and can turn otherwise peaceful protesters violent; it becomes a vicious cycle. Good crowd control should have de-escalating tension as its ultimate goal.

These videos show two angles of activist Felix Rivera-Pitre being punched in the face by a police officer later identified as Deputy Inspector Johnny Cardona.

Rivera-Pitre, and several witnesses at the scene, say he was trying to get away from the officer when he was assaulted in an unprovoked attack.

Note how the crowd is calm before the assault and then goes into a frenzy immediately afterward. Here, again, police violence appears to be counter-productive to the goal of maintaining order.

The NYPD claims that Rivera-Pitre tried to elbow Cardona, and issued a warrant for his arrest. Rivera-Pitre's lawyer, Ron Kuby, told the Village Voice, "We deny that. There's no video, there are no photographs of that. But, even so, Cardona was not making an arrest; he was beating somebody up. Sucker-punching someone in the jaw is not a means of making that arrest. He should be arrested for that, but the police don't want to."


8. The Video That Propelled a Movement

It's entirely possible that this video of Officer Anthony Bologna pepper-spraying several women in an NYPD “kettle” led to the Occupy movement's rapid expansion.

Watch the clip and keep an eye on the bald police officer on the lower-right-side of the frame. He appears to be genuinely shocked by what he witnesses. His body language says, "what the hell was that about?"

This is a classic case of nonviolent resistance being met with police violence.

In the video, courtesy of RT, the man on the ground is limp and non-threatening, with his arms locked with another protester, when an NYPD officer punches him repeatedly in the face. Several others are then manhandled by the cops for no obvious reason.

This video shows the moment when Iraq war veteran Scott Olsen was wounded by Oakland police officers on October 25. T

here are two things to keep in mind here. First, the Oakland police manual forbids police from deploying teargas or flash-bang grenades directly at a crowd of protesters, regardless of what's happening on the street. Second, after Olsen is wounded, a cop throws a flash-bang grenade directly and apparently purposefully at those trying to assist him. Even in wartime, it's a violation of international law to fire on unarmed medical personnel tending to the wounded.

Also note the climate. As I wrote recently, those who have developed an image of police actions from New York should understand that riot police in Oakland are highly militarized, clad in full black body armour and bristling with automatic weapons, teargas launchers, flash-bang grenades and tasers. When they move in, the atmosphere is reminiscent of a battlefield, replete with a series of jarring explosions.

Those aggressive tactics create a dangerous cycle, allowing the minority of protesters who seek confrontation with law enforcement to justify their provocations as acts of “self-defence.”

(This story was published on Truthout on Friday November 18, 2011, and has been republished under a Creative Commons licence.)