Hopes that the Abbott Government might be competent, trustworthy and adult have been dashed across the community. Catholics especially feel betrayed, writes Alan Austin.

PERHAPS THE MOST PROFOUNDLY DISAPPOINTED group in Australia at the failure of Tony Abbott the prime minister and Tony Abbott the human being is the Roman Catholic community. Once a favoured son for his earnest faith, as evidenced by a stint in a seminary and earnest advocacy for Bible classes in schools, he is now a prodigal son.

Disquiet among Catholics derives not merely from his general failure to deliver what he promised, but from his repudiation of basic tenets of the Christian faith.

Catholic teaching is clear on both in vitro fertilisation and abortion. Both are wrong.

Abbott, however, out of a desire to limit the damage from past infamous anti-women comments has said he will not seek to limit either. Indeed, he tried to make political capital last year from revealing that a staffer kept her fertility drugs in his office fridge.

This has outraged conservative Catholic commentators.

‘He has become a public scandal to such a point that nothing short of public condemnation by the Bishops or other prominent Catholics will do. His errors have sown confusion and on his current trajectory he will inflict much more damage in the Prime Ministerial years ahead.’

A more mainstream concern is accountability and trust. Julia Gillard was hounded throughout her prime ministership for one broken promise – the notorious

“… no carbon tax under a government I lead …”

Not even the glaring reality that the voters had foisted upon her a hung parliament, minority government and a deal with the ornery Independents and Greens excused her.

‘Two years ago today, Julia Gillard lied to the Australian people about her plans for a carbon tax.’

Tough love. Is Abbott certain she intended in her heart to break the promise at the time it was made? Either way, the standard was set — regardless of circumstances, a promise not fulfilled is a lie.

By that standard, Gillard told two, maybe three, ‘lies’ in her three years as PM. But Abbott is already guilty of twenty, maybe thirty.

Some of the most articulate criticism of Australia’s inhumane refugee policy appears in Catholic publications, including the highly-respected Jesuit journal Eureka Street.

According to Kevin, it:

Kevin is dismayed at the dishonesty – or bearing false witness, as scripture calls this – at the heart of Abbott’s policy.

‘… has compounded the offence by an insincere ‘apology’ that claimed falsely that our Navy ships made ‘positional errors’ in Indonesia's complex archipelagic waters: a lie so readily refuted by commonsense logic and seamanship as to be grossly insulting to Indonesia.’

Harming the most vulnerable

Workers with refugees, including Catholics, have been shocked at the treatment many victims of oppression abroad have received after arriving in Abbott’s Australia.

A woman in detention who had just given birth in November was refused contact with her baby. Other failures of human decency are on the record.

The Catholic Justice and Peace Commission has implored the government to stop returning refugees to Sri Lanka.

‘How can they, in good conscience, send Sri Lankan Tamils back home when they know many [will] be forcibly disappeared and many are still being detained indefinitely and tortured?’

Names for the founder of the Christian faith include ‘Lamb of God’ and ‘Prince of Peace’. Not surprisingly, then, some Catholics are dismayed at the aggressive military stance the Abbott regime is taking in civilian matters.

‘The current dispute with Indonesia over border incursions by the Australian Navy is symptomatic of a deeper problem — the militarisation of political discourse.’

In Australia, he claims:

'… this is being taken to an extreme not previously seen outside authoritarian societies.'

Spying and threats to the ABC

Abbott’s outrage at the ABC for revealing details of Australia’s espionage was subjected to the studious scrutiny of Christian ethics by Eureka Street editor Michael Mullins.

‘At stake we have freedom of the press, and the independence and integrity of the ABC. These should not be given nor taken away on the whim of political or diplomatic expediency. The same can be said for spying itself, which is a potentially justifiable offence against human dignity. As such, it is akin to the just war and cannot be sanctioned lightly.’

Preferential option for the poor

From the earliest Biblical writings, the God of Israel has exhorted rulers to ‘defend the cause of the poor and the needy’ as the first priority of government.

This theme was amplified by Pope Francis in his Evangelii Gaudium in November, which attacked the “idolatry of money”.

'I beg the Lord to grant us more politicians who are genuinely disturbed by the state of society, the people, the lives of the poor.'

Abbott’s priorities are the diametric opposite.

One of his first decisions as PM was to slash $650 million from Australia’s already meagre overseas aid budget.

The bishops were quick to condemn this callousness, as Caritas Australia CEO Paul O’Callaghan wrote in the Catholic aid agency’s website:

‘Caritas urges the Government to … boost its overall aid funding commitment for the next four years. Australia’s Catholic Bishops called on the Government last year to exercise their responsibilities “not merely in our country’s narrow interests, but in the spirit of the common good of all humanity”.’

Pope Francis would urge a good Catholic incoming PM to form a commission of audit to explore where the rich are taking advantage of the poor. For example, business executives on multi-million dollar salaries cutting workers’ wages; or tax concessions to corporations amounting to billions; or handouts to wealthy women to have babies.

The pope would want a committee representing the poor and the outcasts. Instead, Abbott has appointed a group of high income earners, headed by the president of the Business Council of Australia, which is exploring ways to shift wealth and income from the poor to the rich.

What frustrates many are the occasional glimpses of compassion in Abbott’s conduct. Promising the Yolngu in August that he would spend his first week as prime minister with them was a moving moment. On the verge of becoming PM, he seemed so sincere.

This and most other commitments to Aboriginal people from His Hollowness have all proven empty.

What do Catholics want?

‘Listening to the Keating interview on the ABC last night was a treat, a reminder of just why he was such a great Prime Minister and a role model for Catholics in the public square. Here was a politician talking about the importance of seeking the true, the good and the beautiful! About seeking perfection in public policy. About valuing the advice of elders. That is true Catholicism at work.’

Editor's note: In an earlier version of this piece, we incorrectly described Scott Morrison as a Catholic. We apologise for this error. 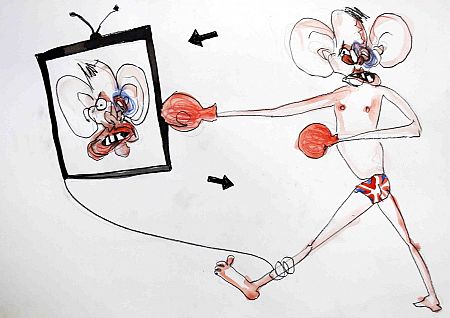