Queensland's Newman Government published a report every six months on progress in delivering its election commitments but failed to provide the report due for 31 December 2014. Steve Bishop thinks a memo to the Premier about problems with that final report might have looked like this: 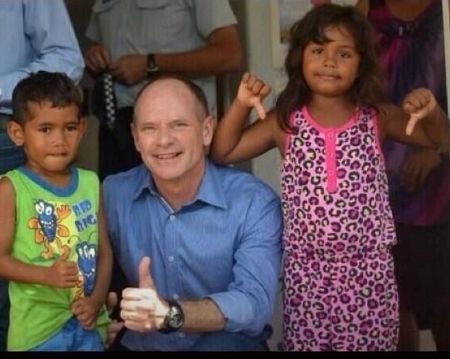 OFFICE OF THE PREMIER

MEMO TO THE PREMIER

FOR YOUR EYES ONLY

We’re in big trouble with the 31 December report on delivering our election commitments from 2012, as you will see from the massive failures in the list below.

Recommendation: Releasing it would be suicidal. Call an early election as a matter of urgency and say it’s due to possible economic unrest due to speculation about the election date. There is no speculation or unrest because everyone’s expecting it in March but it’s the best reason we could come up with. If the media asks about the December progress report on delivering our promises, tell them there wasn’t time to produce it before the election campaign.

Result: Premier, we have a major credibility problem here. Treasury statistics show the total number of jobs on a trend basis is 14,200 less than April 2012. Worse, there are now 44,600 less fulltime jobs and there are 31,200 more unemployed. Not to mention that the unemployment rate has risen to 50% more than your target.

Tactic: The only crumb we have is that Treasury statistics show there are now 30,400 more part time jobs. Over the 33 months, between April 2012 and December 2014, that works out to 900 new part time jobs every month. No one is going to check these figures, so add another 200 a month and advertise that we’ve created 1,100 new jobs every month. 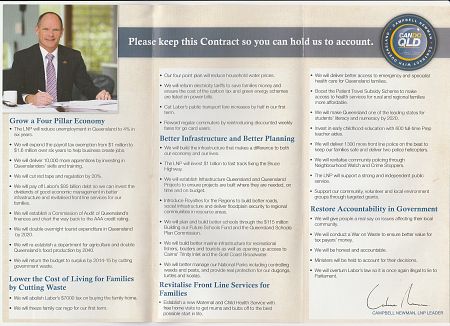 Campbell Newman's 'Contract with Queensland' — can we sue for breach? (Click on the image to see it full sized)

Tactic: Strictly speaking, this is NOT a waiting list so you could fool the media and public by saying repeatedly: “We have cut every single waiting list.” 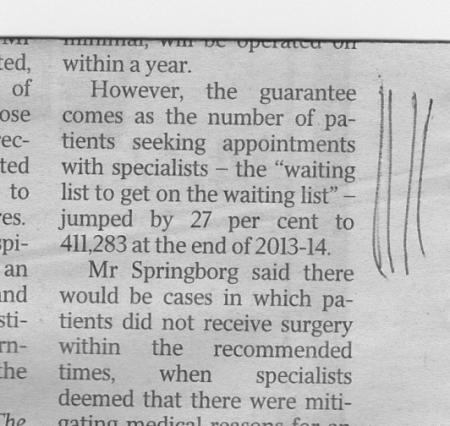 Promise: Reduce the cost of water.

Result: The Queensland Urban Utilities charge per kilolitre has soared by 43%, from $1.787 to $2.547. All the other charges on these bills have also increased.

Tactic: The media and the Opposition don’t seem to have noticed. Say nothing. If asked, blame the councils.

Campbell Newman signed a contract with Queenslanders at the election that he would lower the cost of living.... http://t.co/sWfoVTd0bM

Tactic: The LNP policies website won’t mention what we promised or what we’ve delivered. Just think of a new figure that sounds realistic for what we’ll do in the next three years — such as an extra 7,750 prep teacher aide hours.

Result: This is a disaster, Premier. There are actually 32,000 fewer apprentices, but we haven’t published any figures so we may get away with it.

Tactic: Pretend your promise did not exist. You could give a new promise in this campaign. Tell people: “Three years ago, there was no plan for developing the skills needed to drive jobs for young Queenslanders” and “now we’ve got a strong plan to deliver 12,000 additional apprenticeships.”

Tactic: We can’t be creative with this figure because the Police Union would reveal the truth. Just don’t remind anyone you promised 1300. Keep talking about the 800 as though it’s a magnificent achievement, even though previous ALP governments delivered more than that. The Courier-Mail will report it that way.

Tactic: People just can’t visualise what $2.842 billion looks like. Just keep talking about the "mess" you "inherited from Labor".

#qldpol Despite the past history, the Newman Govt claims it will deliver a surplus budget this time next year. pic.twitter.com/KyFQLZhfY8

Promise: We will pay off Labor’s $85 billion debt.

Result: Whoops. Major problem. Of course, there was never ever a debt of $85 billion. The biggest figure our “independent” inquiry could manufacture as a reason to sell assets was $64 billion — and they had to add the legitimate borrowings of state-run businesses to the Government debt of $29.513 billion to come to that total. The fact is no government in the world aims to operate without borrowed money.

Tactic: We’ve decided $80 billion sounds better and the Courier-Mail accepts it as a fact so just keep repeating that figure.

Tactic: Business is on our side — just make another meaningless promise about increasing the exemption.

Premier, there were several silly promises about being honest and accountable and giving people a real say on issues which we can’t possibly defend.

The best thing you can do is restrict the number of questions at media conferences. You must cut short each media conference and just stride out purposefully, paying no attention to further questions.

The worst thing is that the LNP issued thousands of 'Contracts with Queensland' in 2012 in which you signed 'my pledge' that:

“If we don’t perform you can hold us to account at the next election.”

We can only hope that everyone threw them away. 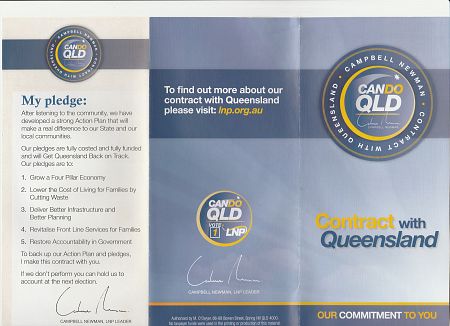