The sticky tale of Fiona Nash, her food lobbyist staffer and Abbott's generous Cadbury subsidy has an unmistakable whiff about it, says Ash Ghebranious.

Some say any publicity is good publicity — but I'm not so sure Cadbury’s parent company, Mondelez is thinking that right now.

The Abbott governments pledge to Cadbury – which at the time, came out of nowhere – is coming back to bite it him in the backside.

What udder bullshit. (See what I did there?)

Take a look at the following screen shot from the ABC: 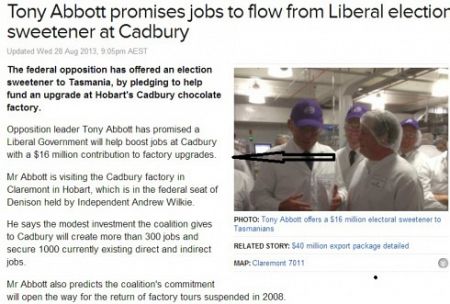 Now, you can see at the bottom of that screen dump, Abbott "predicts" that the gift/grant/payoff/graft to Cadbury "will open the way" of a restart of the tours at Cadbury shut down in 2008.

I don’t know about you, but if a government is investing money in a tourism project, then you want more than ‘predictions’.

The chocolate plant is about to undergo a $66 million upgrade, which will demand an extra 6,000 dairy cows in Tasmania to supply milk.

Mr Abbott says it is unusual to invest in individual commercial operations, but Tasmania is a special case because of high unemployment and low wages.

Lets chew on this for a minute.

Cadbury are planning to go through a $66 million dollar upgrade. It will mean they will be demanding more milk. From 6,000 extra dairy cows, to be exact.

Abbott even goes on and bells the cow:

“Occasionally, I think it is necessary to offer help and let’s not forget that this money is going to result in $50 million of private investment."

Now you don’t have to be Professor Julius Sumner Miller to notice that if you add $16 million to $50 million you get a $66 million dollar upgrade. The exact grand total that the chocolate plant says it is undergoing in its factory upgrade to produce more chocolate.

So, where does Cadbury mention tourism?

Answer: nowhere. In fact, the ONLY person who raises tourism is – you got it – Prime Minister Tony Abbott.

Abbott also recently revealed – albeit very reluctantly – that assistant health minister Senator Fiona Nash’s ex-chief of staff, Alastair Furnival (highlighted above with Abbott and Eric Abetz at the Cadbury plant in August) just happened to be acting on behalf of Cadbury as an ‘economist’ while Abbott was negotiating with them just prior to the election and, indeed, was himself lobbying for funds from the Government for the company.

Which is strange, as he was also then listed as a director of Australian Public Affairs: a lobby group that ACTED on behalf of several companies, including Mondelez and its subsidiary, Cadbury. At the time, he was also working as a political consultant. My bet is with and in the office of Senator Fiona Nash.

Furnival hit the media radar recently when it was discovered that he, acting as chief of staff for Senator Nash, shut down a website that promoted healthy eating the same day a person from a powerful food lobby – Gary Dawson from the Australian Food and Grocery Council – called the office to ‘complain’ that the website was active and live.

The media has work to do. Just when did Gary Dawson contact Senator Nash’s office?

According to Dawson, he called that day.

We know from Senate Estimates hearings this week that Furnival asked for the website to be shut down in the afternoon. And he then called 15 minutes later to ask if it has been done yet.

But if Gary Dawson called during the day, what happened between the taking of the call and the call to shut down the website? Did Senator Nash seek advice from the health minister, Peter Dutton? Or did she contact Tony Abbott’s office to get advice? Or did she make the decision all on her own?

Senator Nash insists that the website was not ready and called for it to come down. But if that is the case, and if Dawson contacted her office in the morning, why did it take till the afternoon for Furnival to contact the department?

I could be just fishing here. It is possible that Dawson contacted Senator Nash’s office that afternoon. But it strikes me that a lobby as big as the one he represents would have noticed the site the very minute it went up and would immediately contact the Government.

We also know from estimates and from Abbott’s own words that Furnival was ‘dilatory’ in divesting himself of his shares.

But, in reality, it was just one share. The company was wholly owned by him and his wife. One share each. And as Senator Penny Wong asked in Estimates, why did it take Furnival over five months to divest this one share to his wife?

The other matter was that Furnival was still listed as a director of the company until late in February 2014. According to testimony given by Senator Nash at Senate Estimates, she was ‘advised’ that removing him from the register of lobbyists would take a ‘while’. Senator John Faulkner, also at the estimates, pointed out that this can in fact be done online and in a couple of days. Senator Nash stuck to her story.

In the House of Representatives, Abbott made the comment that Mr Furnival had been dilatory in divesting his shares and as a result had done the right thing by resigning.

This contradicted with Senator Nash’s estimates testimony, where she insisted Furnival had done nothing wrong.

The question this poses is: if he had done nothing wrong, then why did she accept his resignation?

Abbott and Nash may have farewelled Alastair Furnival from Senator Nash’s office, but there is still a lot of questions that need answering.

And there is the redolent scent of cow patties in her office and in his.

As I said: not all publicity is good publicity. And Mondelez, who are also the owners of Kraft, are probably not happy little Vegemites right now. 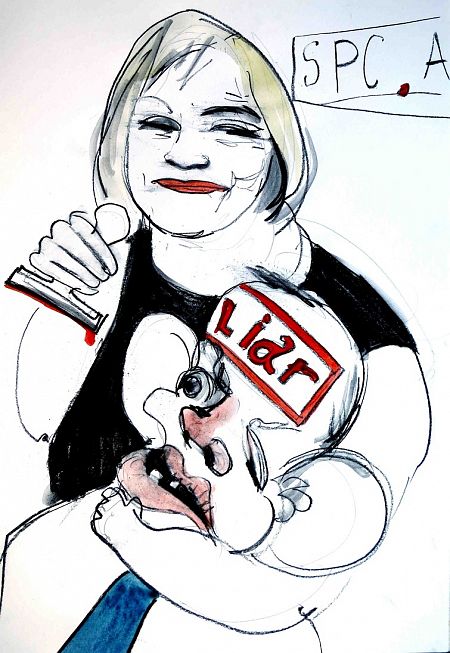 The Coalition’s Medicare policy: Be afraid — be very afraid