But Andrew Bolt IS a racist: In black and white

Alan Austin has gone back through the racial vilification judgment against Andrew Bolt to set the record straight.

IS ANDREW BOLT’S INSISTENCE on an apology from Marcia Langton and the ABC the height of hubris and hypocrisy? Has the man no shame?

That, perhaps, depends on our understanding of the findings of the notorious 2011 racial vilification trial in the Federal Court — Eatock v Bolt.

Never has an Australian judge’s unchallenged decision been so effectively undermined by the organisation falling foul of the judgment.

The Murdoch newspaper group and its employee Andrew Bolt have comprehensively pulled the wool over the eyes of, not just their rusted-on supporters, but many of their detractors as well.

Even The Guardian this week furthered the myth that the Bolt case was about free speech.

It quoted a parliamentarian in relation to the matter, who was reported as saying:

“Freedom of speech is a God-given right; if we don’t allow things we don’t want to hear then we don’t believe in freedom.”

The Eatock v Bolt decision, in fact, presents no threat to free speech whatsoever — only to malicious lies.

A group of fair-skinned Aborigines brought the action under the Racial Discrimination Act 1975 (RDA). They claimed two 2009 articles in Melbourne’s Herald Sun had falsely accused them of pretending to be Aboriginal for financial gain.

Justice Bromberg found in their favour.

“I have not been satisfied that the offensive conduct that I have found occurred, is exempted from unlawfulness by section 18D [guaranteeing free speech]. The reasons for that conclusion have to do with the manner in which the articles were written, including that they contained errors of fact, distortions of the truth and inflammatory and provocative language.”

News Corp did not appeal. Instead, it commenced a vigorous – and highly successful – campaign in the court of public opinion to subvert the judgment.

The following day, the Herald Sun began the counter-attack with its front page declaring ‘THIS IS A SAD DAY’.

Bolt himself proclaimed it a “terrible day for free speech in this country”.

Then a procession of academic lawyers, civil libertarians, journalists, commentators and politicians railed against the decision, all insisting it undermined free speech.

And then Opposition leader Tony Abbott promised to “champion” freedom of expression by repealing sections of the RDA.

But Justice Bromberg had made it abundantly clear that the case was not about expressing opinions. Only about concocting slander.

“Freedom of expression is an essential component of a tolerant and pluralistic democracy,” he affirmed [summary 14].

The judge stressed [paragraphs 430-434] that the RDA protects opinions ‒ however obnoxious or offensive – provided they are genuinely held and expressed for academic, artistic or scientific purpose, or in the public interest, or in publishing a fair and accurate media report

He repeatedly reinforced this [para 353]:

“Those opinions will at times be ill-considered. They may be obstinate, exaggerated or simply wrong. But that, of itself, provides no valid basis for the law to curtail the expression of opinion.”

The central issue was this: Were the factual allegations “accurate” and “genuine”?

Those are key words in the legislation. That question occupied most of the court’s time and the greater part of the written judgment.

Bromberg found in the articles several statements “shown to be factually erroneous” comment, “unsupported by any factual basis and erroneous”, asserted “untrue” facts and that several contentions were “incorrect” or “grossly incorrect”.

He found inferences which leave “an erroneous impression”, “gratuitous references” based on “a selective misrepresentation” and omissions which “meant that the facts were not truly stated”.

“… in relation to most of the individuals concerned, the facts asserted in the Newspaper Articles that the people dealt with chose to identify as Aboriginal have been substantially proven to be untrue.”

Bolt apologist Chris Kenny howled in The Australian that the finding

‘… has drastic implications for free speech.’

He accepted there were misrepresentations in Bolt’s articles — but, hey, so what?

‘Errors are always unfortunate and sometimes egregious but in this case they are hardly the central point. Some of what Bromberg cites as factual error is more a matter of emphasis. It is a canard to suggest the case was about disputed facts: it was about apparent offence caused by Bolt's controversial and strongly worded opinion.’

The judge made it perfectly clear [para 386] that the lies were absolutely central:

“The deficiencies I have relied upon … are about deficiencies in truth. The lack of truth in conduct which contravenes s 18C, seems to me to have an obvious bearing on whether the conduct should be exempted from unlawfulness ...”

He could hardly have been more emphatic [para 390]:

“Untruths are at the heart of racial prejudice and intolerance.”

Finally, to the matter of whether Bolt is a racist. The judge was specifically asked to address this when Bolt and the HWT urged him to exonerate them of racist intent.

“Mr Bolt and HWT contended that the terms of any declaration made should expressly state that the conduct in contravention of s 18C ‘did not constitute and was not based on racial hatred or racial vilification’. It is contended that the inclusion of these words will facilitate the educative effect of the declaration made and contribute to informed debate. I do not regard the inclusion of the words suggested as appropriate.” 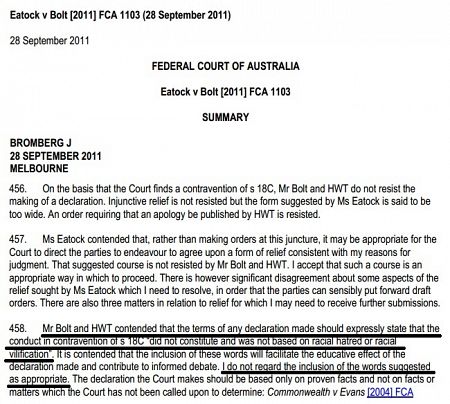 In other words, on all the evidence heard, it is indeed appropriate for the guilty parties to wear the racist label.

Unless and until Bolt acknowledges this and apologises to the Aboriginal people he has vilified – which he refuses to do – he is hardly in a position to demand apologies of others.

And if Tony Abbott claims the RDA must be changed to protect free speech, he is also lying.