PRESIDENTIAL CANDIDATE Bernie Sanders, who spoke to overflow crowds in Iowa and Minnesota over the weekend following his official campaign kick-off in Vermont last Tuesday, is gaining traction with both the press and the public.

Several news outlets have pointed out that Sanders appears to have more momentum behind his nascent White House bid than former Maryland Governor, Martin O'Malley, the Democrat who announced his own presidential aspirations in Baltimore on Saturday.

Bernie Sanders is being taken seriously in (and out of) Iowa http://t.co/myyJPLvjSM

Writing in the LA Times, Michael A. Memoli said:

'O’Malley, who formally launched his candidacy Saturday, not only faces a dominant front-runner in Hillary Rodham Clinton but is also being upstaged by Sanders, the shrewd self-styled socialist senator from Vermont who has made an early and successful play for Clinton skeptics in the party base,'

'Martin O’Malley was supposed to be the main liberal alternative to Hillary Clinton. But when he announced his candidacy Saturday in Baltimore, he found that spot already taken by someone else.

Vermont Senator Bernie Sanders, who is now Clinton’s top rival in early polls, beat the former Maryland governor to a presidential announcement by exactly a month, and to a outdoor kickoff rally by five days.' 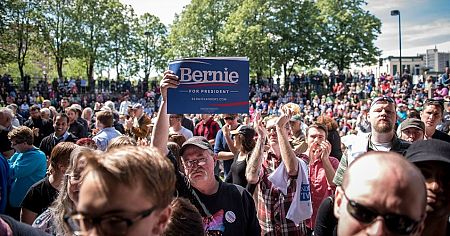 'Sanders – a self-described socialist who many party leaders consider an unlikely standard-bearer – has started to rise in the polls, while O'Malley is hovering in the low single digits,"

'At campaign stops in early states and elsewhere, the firebrand from Vermont is drawing enthusiastic crowds that are several times larger than those that gather for O'Malley.'

But Sanders is nipping at more heels than just O'Malley's.

"Objects in your rearview mirror are closer than they appear," Meyer reportedly told Price following a robustly attended event featuring Sanders at a community center in the rural northeast Iowa town of Kensett. "Mrs. Clinton had better get out here."

'Mrs. Clinton’s advisers are most concerned that Mr. Sanders might prove effective, particularly in the Democrats’ televised debates, at painting Mrs. Clinton as squishy or untrustworthy on liberal issues.

The crowds at Mr. Sanders’s Iowa events appeared to be different from the state’s famously finicky tire-kickers. Many said they had already made up their mind to support Mr. Sanders. They applauded his calls for higher taxes on the rich to pay for 13 million public works jobs, for decisive action on climate change and for free tuition at public colleges.'

According to the Minneapolis Star Tribune, at an event in that state on Sunday, Sanders

'charged up more than 3,000 supporters with his fiery, left-leaning rhetoric about income inequality and money in politics.'

'The crowd, with some people standing outside because the hall was full, seemed unconcerned with the conventional wisdom that there is no race on the Democratic side as Hillary Clinton marches toward the nomination with a pile of money, endorsements and party faithful’s love of the Clinton name.'

The UpTake, a Minnesota-based independent non-profit news service, spoke with people waiting in line for the event to find out why they're supporting Sanders:

Meanwhile, in Iowa, Sanders attracted overflow crowds in Ames and Davenport, then capped his three-day trip with a Saturday night stop in Kensett, where more than 300 people greeted him — some driving more than 50 miles to do so.

Listen to why thousands turned out to hear Bernie Sanders

"This country and our government belong to all of us,"

Sanders told a room of more than 300 people – some of whom sat on exercise balls when regular seats filled up – in Iowa City on Saturday morning. He urged people to tell the one percent:

"Enough is enough. The billionaire class can't have it all. And when we do that, we win."

"Think big," the candidate told the crowd in Minnesota.

"Here comes Bernie Sanders!" @cenkuygur on enthusiasm for @SenSanders in Iowa and what's really behind it https://t.co/5eoZtMXHQB

For news around the world, subscribe to IA for just $5.