Unlike the Abbott/Hockey sledgehammer approach, this Turnbull/Morrison 2017 Budget is still cutting off our arms and legs but anaesthetising us first, says John Passant.

From the point of view of the Turnbull Government, although they would not use the phrase, if true, this would be a major political victory.

It would mean, they would hope, that the Abbott/Hockey "zombie" 2014 Budget and memories of it have finally been killed off.

"Labor-lite" is partly right — and not just for the stereotypical big spending big taxing narrative. Compared to other OECD countries, Australia is a relatively low spending, low taxing country and that is true of both Labor and the Liberals. The difference is in the detail.

The Coalition Government has, almost Labor-like, decided to tax the big four banks, plus Macquarie, just a little bit more. This will raise an extra $6.2 billion over four years. Given that the profit of the big four in one year is around $30 billion, and some of that at least is economic rent or super profits, this impost is something that the banks should be able to handle easily. They are, after all, the most profitable banks in the world.

Guess what the banks will do?

"If the banks pass this on, the Treasurer has just tightened monetary policy by 12 to 25 basis points. And the sectors most at risk are housing borrowers and small and medium enterprises."

Given their market dominance, the banks will in all likelihood pass the tax on to customers. After all, the banks have their super profits to protect. And they have form. They raised interest rates recently in response to the Australian Prudential Regulation Authority tightening some investment lending rules.

If they don’t pass the tax on to customers, they’ll pay lower dividends. That means the returns of our superannuation funds will be lower.

The bank tax is the Turnbull Government’s attempt to address the Labor Party’s very popular call for a royal commission into the banks. This government subterfuge might work, until interest rates or fees go up. That will only fuel the Opposition calls to really bash the bastards. Whether a royal commission would do that at this stage is a moot point.

The government will also try to increase the Medicare levy from 2% to 2.5%. Ostensibly, this increase is to fund the National Disability Insurance Scheme (NDIS). I say "ostensibly" because it is a just a flat tax increase across the board that will go into general revenue.

By the way, when last in power, Labor increased the Medicare levy from 1.5% to 2% to – you guessed it – fund the NDIS.

However, a 0.5% increase in tax on someone on $21,655 (the new Medicare levy threshold) has a greater impact than that on someone on $216,550. Low-income people spend all their money, or most of it, on necessities and don’t have anything left over.

It gets "better". Those on incomes greater than $180,000 will, from 1 July, no longer pay their 2% budget repair levy and, hence, will receive thousands, or tens of thousands, more in after-tax income.

There are other "us and them" comparisons we can make. The removal of the 2% Budget Repair levy on those on incomes greater than $180,000 will save the Treasurer about the same amount that workers on Sundays will lose when penalty rates cuts come into effect on 1 July — $70 a week. It is all about priorities, evidently.

Speaking of priorities, the government is also attacking university students — overwhelmingly, young people starting off in life. Their course fees will go up and, because of the Orwellian "efficiency" dividend of 2.5%, the quality of their education will go down as Universities do more with less. Students will also have to begin repaying their university debts when they begin to earn more than $42,000 — well down from the current $54,000.

People on Centrelink payments, such as Youth Allowance and Newstart, are also in the government’s sights. For a single person, unemployment benefits are $267 a week — about $160 below the poverty line. The government, in its infinite wisdom, has decided that it will conduct a pilot program of 5,000 random drug and alcohol trials on these welfare recipients. Anyone on the dole who fails the drug test will have their payments quarantined, be issued a cashless welfare card, or even lose their payments. This is on top of a demerits system leading to lost benefits for people who miss appointments.

This government is a sewer dweller when it comes to collecting statistics. Yep, suburbs with high concentrations of drugs in urine and poo in the sewers, coupled of course with high unemployment levels, will be targets for where the "random" tests occur.

Unemployment and drug use (legal and illegal) often go hand in hand. The despair of being unemployed can lead to self-medication. Ruling class cocaine users will be safe, as will the Parliamentary pissheads.

Scott Morrison wants to humiliate jobseekers with piss tests. Let's make sure he knows EXACTLY what that feels like https://t.co/rKhypAN46N

The programme will cost much more money than it saves. And it is certainly not about helping drug users. It is about feeding raw meat to the government’s attack dog base. It demonises welfare recipients as an attempt at distracting from the reality — a rotten economic system that cannot provide well-paid jobs for everyone. There are ten job seekers, on average, for every job advertised.

Instead of the government claiming ownership over the lives of welfare recipients, maybe they should be drug testing the CEOs, senior officers and the board of every one of those 679 big businesses that paid not one cent in tax on their total of $462 billion in revenue in 2014-15.

At the same time, the government is attacking the poor, workers, the unemployed and university students, it still wants to give tax cuts worth $65 billion over ten years – yes, $65 billion, not the $50 billion as previously reported – to companies. Priorities, priorities.

Scott Morrison has also promised us a budget surplus in 2021. Every treasurer for the last six years has been promising us the same thing. "In four years’ time the budget will be in surplus." No doubt the cheque is in the mail too...

This promise of a surplus is fantasyland stuff, or heroic, as more sober analysts describe it, built on forecasts and projections, which frankly suggest the Treasurer might need drug testing too. For example, the Treasurer said GDP would increase by 3% in 2018/19. 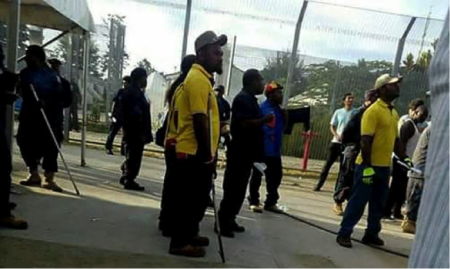 Not only that, wage rises, currently stagnating at around inflation of 2%, are projected to miraculously turn around and rise by an extra 0.5% for each of the next three years and peak at a 3.75% increase in 2020-21. Can I have what Scott’s having?

Remember, this is the government that defends the cuts to penalty rates and has not offered its own workers a pay rise above inflation in three years of negotiations. Here is a graph from Macro Business of what has been happening to wages recently compared to the budget projections for the next few years. 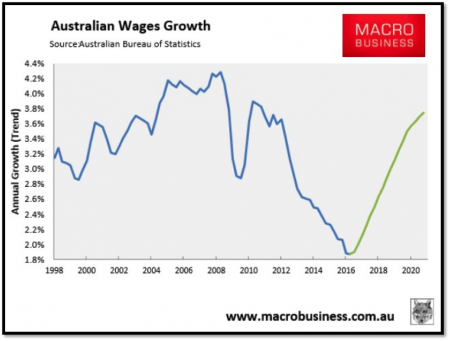 The wage projections look just a little out of whack, don’t they? Much like the whole basis for the Budget, including the GDP projections and the terms of trade predictions, already falling apart.

This is a budget that, instead of using the Abbott and Hockey chainsaw, takes a scalpel to the poor, unemployed, students and working class. Turnbull and Morrison are still cutting off an arm and a leg but, unlike Abbott and Hockey, putting us under anaesthetic.

Morrison to test sewage for traces of drugs #auspol pic.twitter.com/sagFLSVEaE

IA from the Press Gallery @ethicalmartini Budget 2017: A budget for 'lifters' and 'leaners' https://t.co/fCHcIlkLf9 @IndependentAus