The incredibly realistic new telemovie ‘Game Change’, which relives the 2008 US presidential election from the vantage point of Sarah Palin and John McCain, is a must see for political junkies everywhere, writes Bob Ellis. 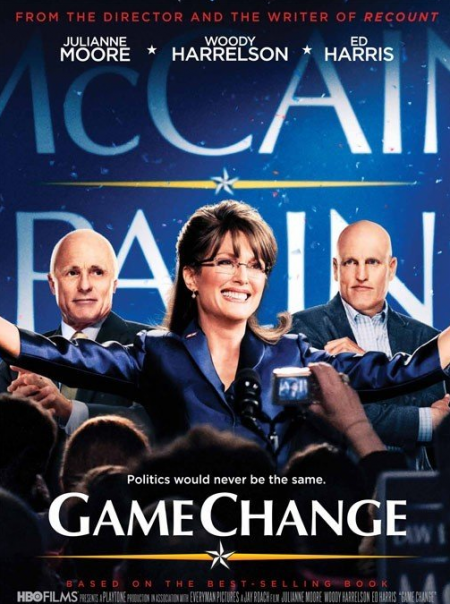 A TELEMOVIE called Game Change with Julianne Moore as Palin, Ed Harris as McCain and Woody Harrelson as Steve Schmidt, their campaign manager, is better than The Ides of March and the best backstage-of-politics film I have thus far seen. Avoiding Sorkin heroics, Oliver Stone ‘revelations’ and Spencer Tracy gravitas, it gets the tedium, sleeplessness, panic, momentary exuberance and knuckle-white suspense of campaigning (I have watched backstage about ten campaigns) than any film since, well, The Candidate in 1972.

It o’ersteps not, in Hamlet’s nice phrase, the modesty of nature. It is as it must have been. Woody Harrelson is as good as Giamatti and Hoffman in Ides; the decent, beliefless puppeteer exhausted and wanting another life. The script, by Danny Strong from the book by Mark Halperin, is majestic in its quietude, and the direction, by Jay Roach, almost Scandinavian in its unjudgmental tenderness.

Wonderfully, Moore’s Palin is not so much dumb as massively uninformed. She thinks the Queen rules England, Saddam caused 9/11, her opponent is called ‘O’Biden’ and does not know what the Fed is. She can, however, if tenaciously coached, pronounce ‘Ahmadinejad’ and learn forty minutes of closely-reasoned rhetoric she expertly delivers in the Debate. A small-town beauty with a personal history of sulking, she, Marilyn-Monroe-like, has verbal glitches, hates history tutorials and frequently goes on strike. Managing Judy Garland in her final bi-polar months would have been easier, I think, and the benign unlustful patience of McCain, a torture-survivor, is both surprising and convincing.

But, like Judy, she can deliver, and the unfeigned love of provincial America, which is about fifty per cent of it, is deeply disturbing. Had she been allowed to speak after McCain conceded she’d be the nominee now, and Steve Schmidt knew this, and made sure she didn’t. McCain warns her against energising the party nutters, and shows what a champion of old-world political civility he was/is.

Shrewdly, Blitzer, Hannity, Anderson Cooper, Dana Bash, Gingrich, Obama, Giuliani and Biden are played by themselves and Moore’s Palin (identical in any case) computer-inserted into the crowd-and-platform shots absolutely seamlessly.

The result is a new kind of American movie, both drama and documentary, with the physical resemblances and walk-on performances so exact that, as in Capote, Downfall and The Gathering Storm, you completely surrender to the fabrication with all your heart. It is almost British in its modest caution, and so quietly thrilling moment by moment that you want it never to end.

Moore will get awards for it, as Streep did for her pitch-perfect Thatcher, but Harrelson is even better as the headshaven, patient, disgusted Henry Higgins of an Eliza he can neither stir nor punish when there’s a world to win and a game to change and she won’t come into the playpen and do the work.

Seen for the second time, it proves remarkable in its complexity. Palin is both narcissist and loving mother, loyal team-player in her heart but ego-tripper by instinct, so passionately pro-life she won’t appear on stage with a pro-choice Republican. Her compassion for the disabled is real, but her ignorance of everything occurring more than two miles out of Wasilla is world-endangering, literally. Through her, we see what she accurately calls ‘the real America’, towns like Wasilla, which has seven thousand people and one hundred and twenty happy-clappy religions, in which Joe McGinniss, who moved in next door to her and wrote a book about her, was genially offered firearms by those left-leaning neighbours who thought she would order his murder and he needed some armed response.

The film does not go into her baby Trig, who McGinnis says was adopted from a stranger in a political chess move to show she was truly pro-life and a good thing for the pro-choice McCain to have on the ticket. It’s a story that, to judge by her lack of a natal bulge on the day before the ‘birth’, and the two long plane flights she took after her waters allegedly broke and she addressed nonetheless unfazed a public meeting while allegedly leaking fluid, has considerable bizarre credibility. But the film does go into the moral devastation Bristol suffered when her pregnancy was aired and joked about by the media, and Palin’s unwillingness to say she is ‘proud’ of her teenage daughter’s immorality.

It is the best thing of its kind in the English-speaking cinema. And what made The Queen at times a little hard to accept as reality – the varying levels of likeness between the actors and the most famous royal faces on the planet – it solves by using all the famed real people but two, so you don’t even have to suspend your disbelief, because it’s real, or so much of it is real.

It was said a million young people decided to go into investigative journalism after seeing All The President’s Men. This film, plus The Ides of March and Frost/Nixon, will drive similar young people of this generation into the political backroom, a good place to be, which I can vouch for.

A marvellous film anyway. Available, I guess, on DVD soon. For all political junkies, a must.