Bob Ellis was at Federal Parliament this week, speaking to politicians, including Craig Thomson, and sensing the mood around Parliament House. 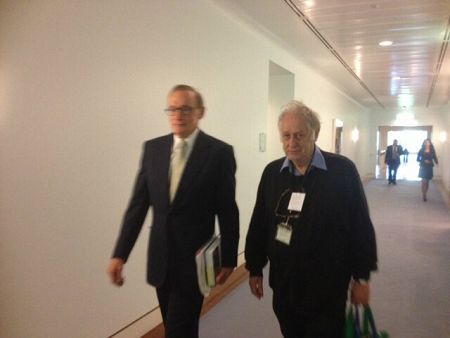 Bob Ellis with Foreign Minister Bob Carr in the halls of power.[/caption]

THE MOOD in Parliament House this week was, well, bifurcated.

The Liberals and Greens were sure a Gillard challenge was on. The Labor backroomers would have liked one, but felt the moment had passed by now. The logic of Rudd, a man famed for his incompetence, was flawed, they thought, and rightly so, and the one they would have settled for, Shorten, was firmly determined on loyalty, and coping with flu.

An Albo staffer was certain Rudd would be sworn in on Friday 22nd, but a Shorten staffer thought this ‘science fiction’. Gollum had better numbers, he said.

At long last, it was clear to many, Wedderburn in Carr’s office, for instance, that the landline polls Galaxy, Newspoll, Nielsen and ReachTel falsely favoured the Liberals. Almost nobody under forty had a landline any more, so the ReachTel robocalling on Late Shopping Night of a commuter suburb’s landlines understated Labor’s vote by perhaps three percent ‒ perhaps five ‒ and this meant no seats, no seats at all, in the Western Suburbs were certain to fall, and all twelve might be saved.

On top of this, the 457 scare and Abbott’s weird plan to raise the taxes of six million of us and to take away the schoolkids’ money were cascading votes back to Labor. Suburbs that always voted Labor might do so this time also. Why would they vote for less money?


And Craig Thomson told me he would win, very narrowly, in Dobell if Labor preselected him — and even if they didn’t, the local polling said, though the numbers might shift slightly if his story grew tiresome. He has been a good local member though, and his constituents mostly believe he was framed, and if Abbott refuses his vote next week, lynching him, as it were, before his day in court, it would help Thomson, not hurt him.

So would Gillard speaking up for him.

‘On the evidence it seems to me he was framed and I’m backing his preselection,’ she could say firmly, with no harm to herself, so thoroughly had the mood now altered. And the wide publication of the sum, forty-nine thousand not five hundred thousand, he was up for – ice creams and schooners and cab rides over five years and a whore he didn’t turn up for in Sydney on a night he was in Perth with his wife – would help him too.

And then there were the rumours. A National member in Melbourne who might join an Andrews cabinet and bring Napthine down in mid-May. "Compromising" footage of Christopher Pyne in Labor’s worried possession. Focus group numbers tumbling back to Labor in Sydney’s west. Questions in these Papal times of Abbott’s three years as a trainee priest ‘not as celibate as I should have been’ and who it was, precisely, he seduced, and how many; and who among them would talk about it, and when.

But...there is, I think, in Labor’s DNA a belief that we don’t deserve power, we aren’t ready for it, we stuffed it up this time, we need some wilderness years to rethink, refocus and reassemble; a shadow of what those Liberals ‘born to rule’ believe also about Labor — they are never ready, they are scum, they should never even try.

Our greatest foe is despondency, and it’s everywhere.

(Bob Ellis is a Labor Party member and was a former speech-writer to Kim Beazley and Bob Carr.)