Former NSW Premier and Australian Foreign Minister Bob Carr is a  passionate environmental advocate. In an interview with Sue Arnold, he says he can't keep up with the destruction of his home State under the Berejiklian Government.

PRESIDENT OBAMA and his family had two pet Portuguese water dogs, Lyndon B. Johnson had two Beagles, Abraham Lincoln liked goats. Politicians and their pets have a lot to say about their characters.

Former NSW Premier Bob Carr has an unusual favourite animal. He’s a passionate advocate for dolphins which unfortunately, can’t be kept in any Parliamentary pools or any other pools! In his latest, recently released, book, Run for Your Life, Bob has devoted a chapter to the love he and his wife Helena have for dolphins.

Dedicated to closing down dolphin captivity pools in NSW, Bob sponsored the National Parks & Wildllife (Marine Mammals Protection Amendment) Act in 1986 making it an offence to

'... take dolphins from the wild, to pluck them from the sea, where they power themselves up to 100 kilometres a day, patrol a home range of 100 square kilometres and can dive 30 metres deep.'

'My legislation made it an offence to haul them from this environment and imprison them in pools one-third the size of an Olympic swimming pool,' he writes in his book.

Bob has never swum with wild dolphins, but it’s an item on his bucket list.

When IA questioned how he became so deeply moved by these majestic animals, assuming it would be a result of one of the wonderful stories of underwater eye to eye contact, his epiphany was different:

In the late '80s, Helena and I were sitting in the Casino Hotel in Hobart during an ALP conference.  Through the plate glass windows we could see dolphins corkscrewing and catapulting themselves from the waves, one of those buoyant celebrations of dolphin-being.

I’d read in the National Geographic examples of dolphins rescuing shipwreck survivors, nosing and nudging them to land, the only animals that will be kind to humans for their own sake. Dolphins are better humans than we.

Inspired by anecdotal stories of dolphin intelligence and the obscenity of “humans netting and hauling dolphins to shore to spend shortened lives in pools, reduced to slavery to amuse narcissistic homo sapiens,” Bob went ahead with developing the legislation.

However, getting agreement from Labor caucus proved to be a major challenge.

“It was a step that reeked of animal liberation, a step into the realm of animal rights. An invitation for the media to say it was a move by the nanny state to deny kids the experiences with dolphins in the three NSW dolphinariums.”

In the end, his most convincing argument was their capacity to suffer by being imprisoned in small pools.

Support from Jill and Neville Wran helped, and most women in the caucus were also engaged and sympathetic.

Unfortunately, one dolphinarium remains in NSW, Coffs Harbour Dolphin Marine Magic, the focus on major anti-captivity campaigns that have thus far been unsuccessful.

Ask the former Premier about the current state of politics in NSW and the conversation quickly becomes deeply depressing. And little wonder if you look at Carr's record.

From his Foreign Minister bio:

As Premier, he introduced the world's first carbon trading scheme and curbed the clearing of native vegetation as anti-greenhouse measures. He was a member of the International Task Force on Climate Change convened by Tony Blair, and was made a life member of the Wilderness Society in 2003. He has also received the World Conservation Union International Parks Merit Award for creating 350 new national parks.

That legacy is being trashed by the Berejiklian Government as legislation protecting Carr’s extraordinary environmental measures are repealed and the focus directed squarely on development at any cost to the environment.

I can’t believe how politicians have allowed the environment to lose its urgency,” he says. “There’s mounting evidence of devastating climate change, deforestation, the oceans are awash with plastics, so much degradation of the marine and terrestrial environment.

Bob Carr: These are extraordinary times - the damage brought on the environment by conservatives is an emergency on our front door #NEM2016 pic.twitter.com/KAagpSCj0q

Carr says protecting his environment is far more more difficult than it was in his day:

Politicians should have a greater sense of urgency than I had 20 years ago when I was in charge.

I'm disappointed there’s no evidence of any young ambitious politicians in government seeking to make an honourable reputation for themselves by embracing environmental battles. When I was a young environment minister, I was bold about going to war with North Coast councils; the environment needed a champion.

Now there’s a greater sense of urgency and a need to deliver a few quick wins. Of course a lot of  the environmental gains we won came about were because we could go to Court to block the efforts. I remember well making a pre-emptive strike in Court to stop the Unsworth Government building an unsuitable road through a pristine area of Byron Bay. An area I was subsequently able to add to the park system when I became Premier. These days, it’s much more difficult.

Voluntary and professional conservationists need a sympathetic court system with the power to hear the cases made by activists.

The destruction depresses the former Premier:

"I can’t keep up with the destruction. The responsibility has to pass to a new generation, there’s just so many hours available in a day and I just don’t want to depress myself."

The best thing we can do for #koalas is leave them their habitat in #Qld #nsw #vic there is widespread land clearing/ logging 😡 @envirogov pic.twitter.com/gQsGCUwzoF

The koala crisis is particularly pressing, says Carr, who suggests the need for an emergency summit:

In his chapter on dolphins, Bob Carr reflects on whether dolphins can empathise with human bereavement and whether they recognise that, in the halls of the NSW Parliament, they had a champion who wrote their protection into the statutes.

One thing is certain. The halls of Parliament desperately need an environmental champion in 2018.

The sheer extent of his legacy should be expanded and treasured for current and future generations. Witnessing the appalling, mindless policies of the Berejeklian Government on the environment must be an injunction for action.

“We have to keep fighting. There’s no alternative. Don’t give up!”

THIS is happening Friday, so excited! A bush walk through the Royal National Park with Bob Carr MHR and Shadow Minister for the Environment, Penny Sharpe MLC to help preserve our RNP - traditions and the biodiversity. RSVP: Maryanne.Stuart@nswlabor.org. @bobjcarr @PennySharpemlc pic.twitter.com/VC1BXNoVwA 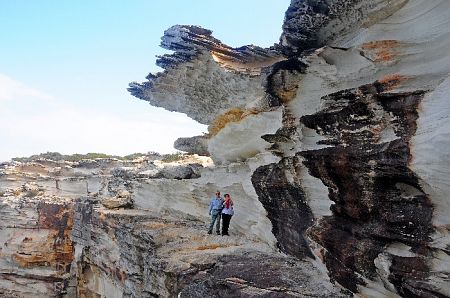