Australia’s mainstream media are ramping up their distortions of the state of the economy. Alan Austin reports.

THE FIX is in with the mainstream media already blatantly deceiving voters about Australia’s economy. They know perceptions of the economy are critical in federal election outcomes. They know the current mismanagement has been the worst in Australia’s history and close to the worst in the developed world today. So they must convince us that the opposite is true.

The Australian ran a story last Friday with these bizarre claims in the promo: ‘This is no ordinary boom so what could halt it? ... No-one expected an economic recovery of this magnitude.’

The Daily Mail online recently headed a puff piece, ‘Australia's economy is set to boom in 2021...’

On the ABC’s Insiders on Sunday, 28 March, Jennifer Hewitt from the Australian Financial Review (AFR) declared that:

“I don’t think there is any doubt that the economy is performing pretty well ...”

“Our economy has outperformed all major advanced economies in the world. We've avoided the severe economic shock that we've seen in other places like France or Italy, the United Kingdom or the United States.”

He repeated that on Channel Nine’s Today show the same day, also unchallenged.

“Australia's economic recovery has been better than nearly any other country in the world.”

These are not just false. They are the opposite of the truth. Australia’s economy is struggling badly — despite the most benign conditions for exports in living memory.

How do we know? Simply by checking actual outcomes today with where Australia has been in the past and should be now. And by comparing Australia with all developed economies — not just France, the United Kingdom and the United States, which are hardly comparable.

There are many critical variables. We will consider five.

Australia’s jobless rate is 5.83%. This ranks 16th in the OECD. Through the last three years of the last Labor Government, the ranking ranged between third and ninth. If it was still ninth, the rate would be 4.55%. The difference is 177,000 extra families with a wage earner.

Currently, 805,000 Australians have no job at all. Another 1.2 million are working fewer hours than they need. This does not happen in a boom. 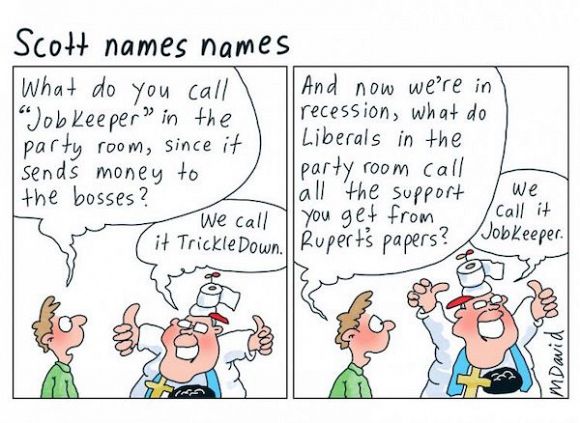 The Morrison Government's eye-watering stimulus package has little to show in the way of long-term benefit for the majority of Australians.

Annual growth in gross domestic product (GDP) has been negative for the last three quarters. The percentage declines were 6.3% in the June quarter last year, 3.7% in September and 1.1% in December.

There were no negative quarters of annual GDP growth throughout the entire John Howard period, even through the early 2000s worldwide recession. There were none under prime ministers Rudd and Gillard, even through the global financial crisis (GFC) – which thrust every other developed economy, except Poland, into negative annual GDP growth for between one and ten quarters.

Australia’s economic growth was the OECD’s highest during the GFC. It has slumped to outside the top ten through the current downturn.

Australia’s growth in salaries over the last year has been just 1.4%. That ranks 23rd out of the 36 countries listed at Trading Economics. This is Australia’s lowest ranking ever.

Australia’s budget deficit blew out last financial year to a thumping $85.3 billion, or 4.3% of Australia GDP. This is the worst since Treasury started keeping the current set of records in 1970. Labor’s deepest deficit, recorded at the depths of the global crisis, was $54.5 billion.

As shown here last week, gross debt has increased to a staggering $818.6 billion. That is more than three times the puny debt Labor left in 2013 – after battling the GFC for five years.

Australia has now collapsed from fifth-ranked in the OECD on debt to GDP to ranking a miserable 17th. 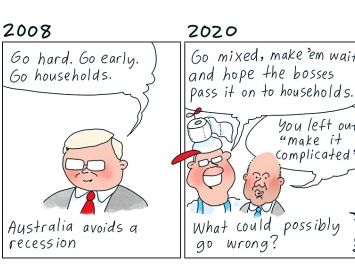 Comparisons with other developed economies

On those five variables – the jobless rate, annual GDP growth, wages growth, the budget deficit and gross debt added in the last year – many countries are way ahead of Australia. This is crystal clear from data published by Trading Economics and Statista.

Ireland, Taiwan and the United Arab Emirates are ahead of Australia on all five outcomes. New Zealand, Norway, The Netherlands, Denmark, Estonia, Luxembourg, Singapore, Switzerland and South Korea are leading on four out of the five, and are way in front overall. Leading three out of the five outcomes are Germany, Israel, Latvia, Poland, Sweden and Brazil. Brazil!

These are not the only variables we could have examined. Others include the corruption index, where Australia has tumbled under this Coalition Government down the rankings to a dismal equal 11th.

So to claim Australia’s economy “has out-performed all major advanced economies” is just plain false. For the media to refuse to challenge this but to amplify and broadcast it is a gross dereliction of duty. There must be an election looming.

The Government is giving $140 Billion in tax cuts to the top 20% income earners. Morrison's priorities are all wrong. #auspol pic.twitter.com/Bxt8GYFSkm

20 December 2021, 7:00am The latest report to Parliament on the state of the economy by Coalition ministers ...

13 December 2021, 7:00am The case for a review of Insiders and sacking its producers, presenter and most ...
Join the conversation
comments powered by Disqus
News updates