They can make a hardened and aggressive street beggar look like he just isn’t trying. I am talking about the Australian wealth lobbies: big business, the property investoriat, superannuation super-accumulators and a number of other privileged economic groups.

They operate through a coterie of paid marketers, PR people, industry bodies, think tank personnel and general go-betweens, who plead their cause everywhere — up and down the land, in and out of Parliament, through the newspapers, in the media and all over the Internet.

The primary target of this well coordinated trade is big: the Australian government system. The purposes of this trade are influence and welfare extraction.

There’s welfare and then there is welfare

Welfare provision, in terms of basic food and shelter in the face of destitution and struggle, represents the highest expression of our humanity. Welfare in the form of lifesaving clean water, sanitation, immunisation, medicine, agricultural assistance and skills training, targeted towards the very poorest of the world’s poor through foreign aid, falls into the same category.

But pleading for assistance to supplement adequate surplus, or to spend on excess, does not meet the basic welfare criterion. Unfortunately, upper-class “welfare” runs rampant through the Australian taxation system via rate cuts, exemptions, deductions, concessions and rebates. To paraphrase Saul Eslake’s words, the holes that riddle the Swiss cheese that is the Australian taxation system. Australia excels in the field of tax concessions.

A 2014 International Monetary Fund report (IMF) showed that Australia had the highest tax expenditures as a proportion of GDP in the OECD: 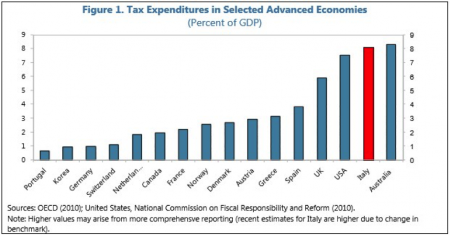 Despite widespread examples of aggressive tax minimisation, big business is currently lobbying hard for a corporate tax rate reduction from 30 to 25 cents in the dollar. The price of this demand will undoubtedly increase if and when President-elect Trump progresses his legislative tax intentions.

The "bother" elements of this corporate tax push are the incessant community warnings of job losses, economic stagnation and social tension that will presumably follow from any refusal of the tax rate claim. The community and the government are invited by big business to ignore these warnings at their own peril.

Interestingly, the current concern of some big businesses for the jobs of their workforces doesn't readily align with their previous practices of offshoring, contracting, casualisation practices, automation and robotics.

You may be wondering how powerful and persuasive these big business lobbies can be on a good day. Just ask the Mining and Energy Services Council of Australia and former Prime Minister Kevin Rudd in relation to the proposed “resources super profits tax” in 2010.

Recall also the alacrity and generosity with which the incoming prime minister at that time, Julia Gillard, sued for peace with the mining industry. It was no contest.

Property and superannuation are another two economic areas around which vocal and aggressive wealth lobbies coalesce for naked self-interest.

The property investment lobby was particularly loud in the 12 month lead up to the 2016 election. Its scare campaign about an economy-destroying housing crash was designed to protect massive negative gearing and capital gains tax concessions, valued at an annual cost to the Federal budget of $11.7 billion (Grattan Institute, 'Hot Property', 2016).

The same overall pattern holds for superannuation tax concessions. Treasury figures placed the cost of superannuation tax concessions at $33.5 billion of government revenue in the 2014-15 financial year. Guess who receives this mountain of government largesse? Well, the Murray Financial Services Inquiry Interim Report painted a deeply inequitable picture in the graph below. 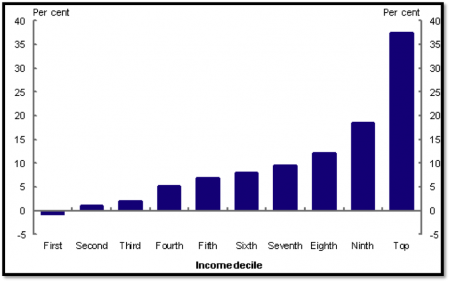 Yet witness the outbreak of coordinated complaints arising from predictable quarters about the excessively modest trimming of the current rorts, as proposed by the Turnbull Government.

There are, of course, other economic areas and other wealth lobby networks, sometimes with only slightly different memberships — they reflect variations on a disconcertingly common theme.

Australia is not a socialist state. Nobody cares how much the economically fortunate acquire through honest earnings and investments.

What does matter, however, are the multiplicity of dodges, rorts and conspiracies against communal effort and the common wealth. Common wealth is not for diversion or depletion in the pursuit of personal advantage. This resource pool is for health, education, research, infrastructure, environment, community safety, defence deterrent and an adequate social safety net for all.

It is time to tell the “beg” and “bother” wealth lobbies what you really think about their "rentier" schemes.

Support equality. Subscribe to IA for just $5 a month.

20 April 2017, 8:00am Australia and other affluent nations can do better for the millions under threat of ...

The atmospherics of the Centrelink robo-debt debacle

9 March 2017, 10:30am Was the robo-debt scheme's main purpose to frighten, confuse and discourage people ...
Join the conversation
comments powered by Disqus
News updates