Peter Dutton's powerful base for exercising and seeking to exercise control over his fellow Australians, appears unchallengeable, writes Bruce Haigh.

THE MILITARY in Australia has played a key role in the national narrative. Its achievements have been woven into myth. External threat has long been part of the political fabric.

The Armed Defence Force (ADF) and paramilitary organisations are seen as protectors of the political class and enjoy protected status as a result. As security organisations proliferate, the military move toward centre stage. Climate change and COVID-19 consolidate its social and political position.

The foundation of Australia was a military exercise. Around 200 British Royal Marines supervised 754 convict men, women and children in the colony of Sydney from 1788. The Governor, Captain Arthur Phillip, was replaced by Major Francis Grose who turned the colony into a military dictatorship. Officers traded in rum and were awarded large tracts of land.

From 1788 until 1870, 24 British regiments served in Australia under military governors. From 1870, the colonies took responsibility for their own defence until Federation. These forces established the tradition of going to the aid of England, even when we were not needed. Men from the colonies volunteered to fight in New Zealand, The Sudan, South Africa and China between 1861 and 1902.

Not only did the military shoot enemies of England, but they also shot the original inhabitants, the Aborigines, who they forced off the land. In this, they were assisted by the police and white settlers. From 1788 until 1920 it is estimated that at least 200,000 Aborigines were massacred.

Convinced that war was coming, the British sent Field Marshall Herbert Kitchener to Australia in 1911. He recommended compulsory military training and the introduction of school cadets. In 1914, on the outbreak of war, 20,000 young Australian’s joined the army. Out of a population of 5 million, 416,000 signed up, of whom 330,000 served overseas. We did not need to be there.

The Australian war correspondent, C.E.W. Bean, was appointed official historian. He wrote dispassionately of the horror and put order where there was none. His was a boy’s own history, preparing the next generation for war. He advocated for a war memorial in Canberra, which in design and display prepared the ground for the deification of Australian involvement in war.

Bean was the father of the Anzac legend, which is fascist and racist in manifestation. Where you and I might have seen crude and foul-mouthed grafters, Bean saw beautiful boys. He loved them. I have been in the army; I have seen a different reality.

Twenty-five April – the day Australian troops went ashore at Gallipoli – was designated a national day of remembrance, attracting big crowds between the wars. By the end of WWII, it was an even bigger event with dawn services and marches through cities and towns by ex-servicemen.

WWII saw the militarisation of Australia. Out of a population of 7.3 million in 1944, Australia had 1 million people in uniform. There were 730,000 in the army; 400,000 served overseas. Australia made uniforms, small arms, artillery, tanks, planes, naval and supply vessels.

All things military had sunk into the Australian psyche by 1945. But not all embraced Anzac Day. Some saw it as showy and shallow, having little to do with remembering friends, accompanied as it was with false bonhomie. Many knew all too well of the violence and nastiness that lay beneath the surface once alcohol had a grip — wives, children and girlfriends better than most.

From 1950 to1953, 17,000 Australian troops fought against the Chinese in an American-dominated United Nations force in Korea. Prime Minister Robert Menzies took the country to war in Vietnam. He accepted the Domino Theory. He believed that Chinese-backed Communism was on a southward march through Vietnam. He gave secret undertakings to the Americans that Australia would support them.

Knowing he was going to fight in Vietnam, Menzies introduced legislation to conscript 20-year-old Australians. Once the bill had passed through parliament, Menzies announced that conscripts would fight in Vietnam. It was an act of treachery. Vietnam led to a vocal and determined anti-war movement.

Australia withdrew from Vietnam in 1972, following the election of Prime Minister Gough Whitlam. Anzac Day and the jingoistic response to the war that went with it was discredited; it sank into disrepute until Prime Minister Bob Hawke visited Gallipoli in 1990 and by so doing, revived Anzac Day.

Hawke and Kim Beazley, as Minister for Defence, embarked on substantial defence spending, linked to a new assertive forward defence policy. Beazley’s background was one of Moral Re-Armament — his transition to warlord should be seen in terms of his intellectual and emotional capture by the U.S. military establishment.

However, it was Prime Minister John Howard who unashamedly used Anzac Day, the uniform and flag to underpin his prime ministership.

After 9/11, Howard committed Australian troops to the war in Afghanistan and then, illegally, to war in Iraq. It suited Howard. He maximised photo opportunities, attending dockside departures, returns and funerals. Uniforms became part of his entourage. He was fascinated and intimidated by them and used them shamelessly.

His so-called war on terror enabled the militarisation of Australia to proceed apace and a framework was established to accommodate a future police state. From 2001, 82 terrorism laws were enacted. By contrast, the police state of Apartheid South Africa had nine laws relating to terrorism.

In 2000, Howard had the parliament pass the Defence Legislation Amendment (Aid to Civilian Authorities) Bill 2000. It gave the Federal Government the power to call out the armed forces on domestic soil against perceived threats to ‘Commonwealth interests’.

If deemed necessary, the ADF may shoot to kill. That is a first for Australia and it is a most dangerous piece of legislation to have on the books. 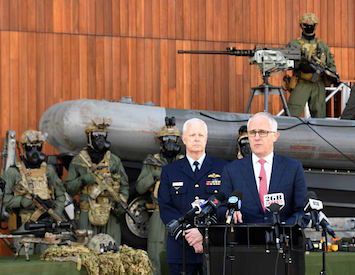 'Conflating police with military functions is not only an insidious overreach but blurs assumptions about justice and law enforcement.'

The Labor Party, under Beazley, did not oppose the Bill. The Act states that 'the Governor-General is to act with the advice of... Executive Council' or in an emergency, 'the authorising Minister’. It is probably why military men are favoured as governors-general — they are more likely to comply with a request to turn out the troops.

Howard’s reluctant but successful intervention in East Timor under former Governor-General of Australia General Sir Peter Cosgrove in 1999, enhanced his reputation as a wartime leader and furthered the militarisation of Australia. He cunningly twisted the narrative to ensure that any attack on him by default was an attack on ADF personnel.

Because the debate on national security was centred around the war on terror, questions on policy were cast as disloyal. The Labor Party has been unwilling to challenge that narrative and as a result, cannot lay a glove on the Liberal National Party (LNP) in relation to security and defence issues. More often than not, in order to demonstrate their patriotism, the Labor Party has gone along with poor measures and legislation proposed by the LNP.

Patriotism and loyalty have become bound into the outdated Anzac myth, the prosecution and celebration of it now often referred to as "Anzacery". It celebrates a white anglo narrative and has no relevance or understanding among newer ethnic groups. It has been captured by the political right.

Yes, respect those who've fought for us, but this toon says a lot of how I feel about an overload of #Anzacery pic.twitter.com/DHYfyc6UDg

The ADF enjoys iconic status. It has been woven into the Anzac myth and is portrayed as a protector and nurturer of the Anzac spirit. It is protected, it can do no wrong. The Australian Federal Police (AFP) raided the ABC to silence critics. It has been inserted into the social and civilian fabric through disaster deployment.

The four-year celebration from 2014 to 2018 of Australian participation in WWI, cost $600 million, plus $100 million for former Prime Minister Tony Abbott’s museum at Villers Bretonneux, plus another $500 million to "upgrade" the themed war memorial in Canberra.

Funds for militarisation and securitisation appear unlimited and expenditure seems beyond parliamentary scrutiny. In 2006, Howard authorised paramilitary training for the AFP — that training presumably continues.

It can be assumed that elements of the Australian Border Force (ABF) also receive paramilitary training. The ABF came into existence in 2015. One-quarter of its members are armed. They have black uniforms and their own system of awards giving them the appearance of a paramilitary force.

The Department of Home Affairs was established in 2017. It has oversight of the AFP, ABF, Australian Security Intelligence Organisation (ASIO), Australian Criminal Intelligence Commission (ACIC) and Austrac. 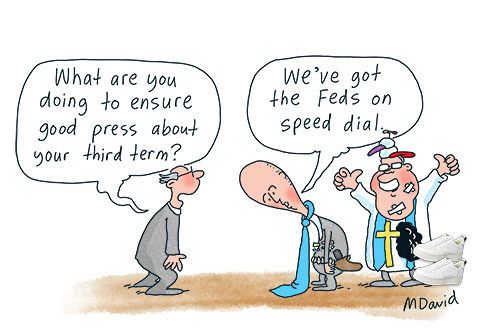 Yes, it is a cat’s breakfast and may well lead to the sort of problems that caused a breakdown in intelligence exchange in the U.S. prior to 9/11. The proliferation of agencies highlights the growth of the terrorism industry, reflected in the empire-building noted above. The industry has now shifted its focus to China, which offers prospects for growth in unearthing evil intent.

Peter Dutton, Minister for Home Affairs, has a powerful base for exercising and seeking to exercise control over his fellow Australians. Left to his own devices he would tap our phones and monitor our devices. Secretary of the Australian Council of Trade Unions (ACTU) Sally McManus, believes he already does. I now have the same attitude to my phone in Australia as I did in South Africa, Saudi Arabia, Sri Lanka and Pakistan.

Parliamentary scrutiny of this basket of cats is almost non-existent, due to a lack of will and an attitude that it would be disloyal to dig up dirt. The official mindset – accepted by mainstream media – is that these are national institutions undertaking vitally important work on behalf of a nation under threat.

Patriotism is defined by the ruling LNP and supported by the Labor Party. China has now been identified as the enemy. It is best to go along with that narrative lest your home is raided, travel restricted and phone tapped.

The Anzac myth is deployed in these times as an appeal to a higher order of nationalism requiring the sacrifice of some liberties and compliance with unpopular directives. Its greatest appeal is on the right of the political spectrum. It has reached its use-by date, but nothing else is on offer.