The U.S.'s first attempt to export the Tea Party has all but imploded. Angry voters have hit back at the Australian Liberal Party's doctrinaire adoption of brutal right-wing policies. Nial McLaren from Truthout warns there is a larger message in this antipodean squabble.

IN WASHINGTON, the annual CPAC (Conservative Political Action) conference is underway, giving "potential presidential candidates" of the Republican persuasion the chance to parade their wares under the floodlights.

By all accounts, posturing and preening is the name of the game, meaning it is more like a febrile revivalist meeting than a screening process for the next finger on the nuclear trigger. It comes a month after another "essential hurdle" for young hopefuls, the Koch Brothers' secretive "show and tell."

With all the media excitement, Tea Party activists must be feeling pretty pleased with themselves. At last – with Obama's term coming to a close next year – a chance to put a nice Christian white man back in the Oval Office. However, dazzled by their razzmatazz, the troops have probably not noticed a slight reverse in the Righteous Battle somewhere offstage.

Some years ago, Australia's right-wing party, the Liberals, decided moderation was not the path to power — that they needed a sharp swing away from the political centre to win government. The country is in danger, they shouted, with hordes of immigrants, religious fanatics and soft-headed greenies trying to swamp "our way of life". What the nation needs is a dose of hard-right realism, a stiff blast of fiscal rectitude, commercial reality and military readiness to counter the creeping mush of years of Labor misrule.

Writing a new policy was a bit of a problem, as the Liberal Party has always been essentially opportunistic, its political program dictated by the polls — but, just across the Pacific, there was a ready-made solution called the Tea Party. So, aided by American donors, we became the test ground for an attempt to export the Tea Party's sinister franchise.

In short order, the Liberal Party ditched its centrist leader, the urbane multimillionaire Malcolm Turnbull, replacing him with the aggressive Tony Abbott and began embracing a flood of rigidly doctrinaire policies directed at protecting us against risks we didn't know we faced. Unbeknownst to the voters, these came straight from the printing presses of such caring bodies as ALEC and Americans for Prosperity.

In due course, the cheerfully fratricidal Labor Party lost the 2013 election. Tony Abbott became prime minister and a period of political hyperactivity ensued, startling the normally somnolent electorate. We are in danger, screeched the Liberal machine, we face political, financial and social meltdown (but not, mind you, meltdown from global warming, that's a furphy).

In May 2014 came the perfervid government's chance to reshape the social and political agenda when it brought down its first budget. It turned out that "brought down" wasn't quite the right expression — crashed during take-off would be better. It was a disaster, not helped by the treasurer announcing that, while reducing services to close the deficit, it was important to reduce taxes because we pay on average 50 per cent tax. Fail: our average tax take is closer to 28 per cent.

As 2014 went by, the disasters piled up, many of them due to the uncontrollably combative Mr Abbott himself. By the Christmas break, there was rebellious muttering among the backbenchers who could see their days were numbered if Abbott didn't lift his game.

They had good cause to be worried; in November, Victoria's Liberal government had been booted out after just one term in office.

In January, Queensland's equally aggressive Liberal premier and close Abbott supporter, the ex-military Major Campbell Newman, brought the election forward — and brought himself down. In a once-in-a-century cataclysm, his Government, which just three years before had won the largest majority in history, was turfed out. Rubbing salt into the wound, Newman lost his seat in Parliament, sending tremors through the various Liberal governments.

Meanwhile, up there in the "last frontier" Northern Territory, the local Liberal Government voted its pugnacious leader out, but he refused to go. The Party is still tearing itself to bits and is likely to be wiped out at the next election.

In New South Wales, the Liberal government faces an election in a few weeks. Rocked by corruption scandals that have already led to the demise of one premier, it is being pounded by an anti-Liberal swing. After a series of indescribably gauche moves, including the ludicrous announcement of a knighthood for Prince Philip, the Queen's nonagenarian husband, rumors that the Federal Liberal party was planning to axe the prime minister spilled into the open.

When it came to the vote, Abbott survived, but by the decidedly underwhelming score of 61 votes to 39. Because it is more or less obligatory for cabinet members to vote for their patron, this means that the prime minister managed only 20 of the 60 uncommitted votes in the party room. He is wounded, that much is certain, a dead man walking, as the gloating commentariat put it.

Did he learn anything from it? Apparently not. After having promised "good government," he seemed to drop one clanger after another. A leaked plan to send troops to Iraq (when his "good buddy" B. Obama had already decided not to), being forced to drop several of his pet plans to reduce services, increasing university fees, and by launching a bitter personal attack on the integrity of the somewhat saintly Professor Gillian Triggs, president of the Human Rights Commission, after she released a highly critical report on the status of children detained in off-shore camps for undocumented immigrants.

The attack on Triggs is an Abbott stitch-up http://t.co/poykeeDVAY #IStandWithGillianTrigg

Where this particular scrap will end, nobody knows, but at this stage, only the chorus of the Murdoch press are still faintly hoping that perhaps Professor Triggs may not be above reproach, as they put it. Meanwhile, the Attorney General has been censured by the Senate for his egregious attack.

Five years ago, when the Liberal grandees decided they needed a much more aggressive leader for their newfound antipodean tea party, they chose an ex-boxer. They forgot that politics is the art of the possible; that attack dogs unleashed often don't know when to stop and their carefully crafted and expensively imported plans are now in near-total collapse. We try to remain objective but, oh dear, the schadenfreude ...

So what's the point? Who, in fact, cares? Prime ministers come and go, that's the beauty of the Westminster system. The PM isn't the head of state, so he can be chucked out without cracking the nation's foundations. The leader of the party is appointed by the party and if the party members aren't happy with his performance, like they can smell the burning brands back in their electorates, they get nervous. 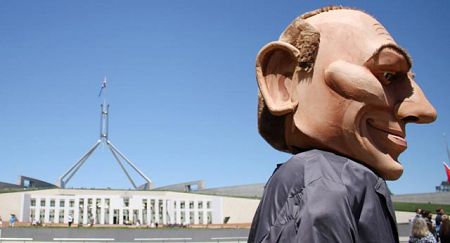 The problem for parliamentarians in this country is that they can't rig the elections quite so easily as in some other parts of the world. The reason is very simple: voting is compulsory and the Electoral Commission is completely independent. It's impossible to disenfranchise large chunks of the population, à la Florida, or make it difficult for the poor to enroll, à la practically everywhere else in the U.S. of A.

As in most countries, money helps win elections, but it is limited and subject to considerable restrictions. For example, in New South Wales, property developers are not allowed to donate to political parties. They try, but the Independent Commission Against Corruption is onto them. So if the voters start to get obstreperous, politicians from marginal seats start to get very sweaty. They know that disenchanted voters get angry and angry voters who are compelled to vote will make somebody pay.

In the U.S., disenchanted voters are more likely to vote for moderate candidates, as everybody in the Republican Party knows full well. Therefore, elections can be swung by reducing the numbers of unhappy voters who, coincidentally, just happen to be people of colour, the poor, sick, unionized (or more likely de-unionized), working classes, pensioners, poorly educated, ex-felons and struggling students living away from home. In short, Democrats.

As long as there is a big turnout, the Tea Party and its fellow travellers of the Rabid Right will lose. The poor cannot compete head-on with Big Money; in terms of elections, all they have is their votes. If they vote, as the example here shows, they will not be fooled.

Big Money knows this; between now and November 2016, expect massive, systematic electoral fraud in the U.S. It is the only chance the one per cent has of taking power and keeping it.

This story was originally published on Truthout and has been reprinted with permission. Copyright Truthout.org. 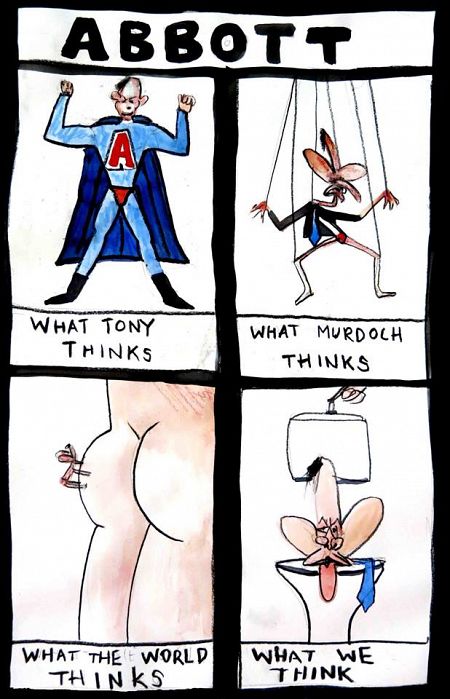