An "out of control" Australian intelligence community may have compromised Australia strategic interests in "the Asian Century", writes Murray Hunter. 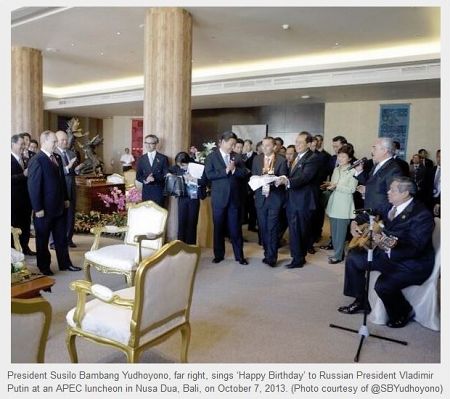 OVER THE LAST WEEK, the German newspaper Der Spiegel and Sydney Morning Herald disclosed that the Australian Government was carrying out electronic surveillance and eavesdropping on phone and internet communications.

Although these revelations are not new and have most probably already been suspected by the host governments concerned, the exposing of espionage activities from Australia's diplomatic missions has caused the Australian Government great embarrassment, which will potentially strain relations within the region for years to come.

So far, the only comment that has come from a "shell shocked" Abbott Government was from Foreign Minister Julie Bishop, who said that "it was not policy of the Australian Government to comment on intelligent matters" — hardly sufficient to placate some very angry governments within the region.

Ms Bishop certainly has a good cause for concern, because last week's revelations according to other documentation and former Australian diplomats are only the tip of the iceberg.

Australia has been collecting intelligence in the South-East Asian region for decades through a multitude of methods from a large array of facilities. In addition to the electronic surveillance activities revealed last week, Australian operatives stationed under diplomatic cover across diplomatic missions in the region carry out continuous on the ground Humint (human intelligence) operations.

A host of other agencies with various functions also exist.

Since the 9/11 terrorist attacks on the US, the Australian intelligence community has been considered an equal partner with the US and operates almost in a totally integrated fashion. There are a number of important facilities on Australian territory which make important contributions to the NSA network. The Defence Signals Directorate (DSD), as well as using diplomatic missions to collect telephone and internet data under a program called STATEROOM ‒ a term referring to covert signals-intelligence gathering bases hidden in diplomatic missions ‒ has a number of dedicated signals collection facilities in Australia. Intelligence operatives are placed within the technical side of these firms with access to data, where X-Keystone is in operation.

Pine Gap, located just around 20 kilometres from Alice Springs in the Northern Territory, is a joint facility responsible for signals collection. Here, the ECHELON software undertakes a meta-collection of phone, fax, email and other data traffic from satellite transmissions, public switched phone networks and microwave signals. This data is screened for pre-programmed keywords and is linked to the British eavesdropping facility at Menwith Hill and a chain of other intercepting facilities around the world.

Pine Gap collected important intelligence during the Indo-China conflicts on North Vietnam, the Laotian Pathet Lao, and the Cambodian Khmer Rouge during the 1970s and 80s. The facility also played a significant role in the Gulf Wars and Afghanistan campaigns. After 9/11, there has been a focus on the collection of intelligence on terrorism suspects. Through combining imagery with radio and mobile phone transmissions, potential targets can be pinpointed for drone strikes. This information is fed to the U.S. Drone Strike Program.

Pine gap is also part of the X-Keystone network, collecting and analysing online data. Access to Pine Gap is vitally important to the US because many of its spy satellites are controlled from this facility, and houses an early missile launch detection system.

A satellite communications facility at Kojarena, near Geraldton in Western Australia, is responsible for intercepting signals and mobile phone communications from China, Russia, Japan, India and Pakistan through a regional satellite network.

Another satellite station at Shoal Bay in the Northern Territory focuses primarily on intercepting Indonesian phone communications and military signals. This facility was instrumental in monitoring East Timor in 1999 during the referendum for independence.

There is a small remotely controlled facility on Cocos Islands also used for signals collection, which feeds into the DSD headquarters at Russell Hill in Canberra. The Washington Post reports that the Cocos Islands is now an important base in South China Sea surveillance as a counter to Chinese presence. Former Australian Defence Minister Stephen Smith last year announced that Cocos Islands might be used for U.S. drone flights over the South China Sea. These activities suggest that China is the main surveillance target, even though Australia's latest Defence Policy White Paper stated otherwise.

Australia has also developed a listening post connected to major undersea communication cables that carry voice and internet traffic between the U.S. and Asia — an action far beyond any legislative authority.

Several years ago, some Australian members of parliament were given a security briefing where a video conference intercept of two of the most senior Malaysian military commanders was proudly shown to demonstrate Australia's electronic surveillance abilities, implying the ability to access some of the most sensitive military and diplomatic communications in the region. Speculation exists that Australia regularly intercepts Indonesian President Susilo Bambamg Yudhoyono's and other high ranking officials mobile phone conversations. Australia has been regularly reading Indonesian diplomatic traffic since the 1950s, which played an important role in what helped the U.S. undermine the Sukarno regime and install Suharto as President back in 1995.

The above data collection system is supplemented with extremely good working relationships with communications companies like Foxtel, Macquarie, Telecom, and Optus, as well as the major computer and internet companies like Microsoft, Apple, Google, Verizon, Yahoo, Facebook, and Twitter. Similar links also exist with banks and credit card providers. Data from these sources is screened through the meta-data collection system PRISM according to Wayne Madsen of the Strategic Culture Centre.

Perhaps even more disturbing than electronic surveillance exposed by Edward Snowden are the HUMINT activities undertaken by Australian operatives under diplomatic cover at Australian missions abroad.

According to a retired senior diplomatic official previously stationed in Moscow and Jakarta and an Australian Federal Police (AFP) officer once stationed in Kuala Lumpur, a large array of human intelligence is collected and operations undertaken from these clandestine groups within diplomatic missions. Each group operating from a diplomatic mission would include operatives from ASIO, ASIS, the AFP, the Defense Intelligence Group, the Australian Taxation Office (ATO), military attachés, and the Department of Immigration and Border Protection. These operatives are concerned with both Australian and foreign nationals in the areas of business activities, money laundering, counterfeiting, identity theft, tax evasion, narcotics, human trafficking, arms trading, paedophilia, terrorism, general criminal activities and anything considered important to the interests of Australia.

Greatly improved signals collection technology has allowed for larger deployment in HUMINT activities. In addition, some work is sub-contracted to 'CIA friendly' companies like VFS Global, which collect and process visa applications on behalf of the "UKUSA" security collaborating countries of UK, USA, Canada, Australia and New Zealand.  VFS has a proprietary client profiling system which assists on creating databases on "persons of interest".

Not all activities are aimed at the host governments the diplomatic missions are operating within. A large proportion of time is spent by these clandestine groups monitoring the personal of other diplomatic missions of interest. For example, Australian intelligence is interested in what the trade officials of the Chinese Embassy are doing in Jakarta, Bangkok, Hanoi, Kuala Lumpur and elsewhere.

Other priorities include the surveillance of Australian citizens abroad in whom an agency may have an interest. Over the last decade, the intelligence services have become much more interested in criminal intelligence where a formal network of Transnational Crime Units (TCU) have been set up across the Pacific in the Cook Islands, Fiji, Kiribati, Micronesia, Pulau, Niue, Solomon Islands, Tonga, PNG, and Vanuatu. This is coordinated by the Pacific Transnational Crime Coordination Centre (PTCCC) located in Apia, Samoa. The Transnational Crime Units assist the Australian Transaction Reports and Analysis centre (AUSTRAC) track the financial transactions of Australian citizens and corporations both home and abroad.

The CIA, NSA and other partner intelligence agencies are now primarily focused upon economic, business, industrial, trade, and political data collection. This information is vitally important in trade negotiations and shaping the future finance-scape of the region, particularly with the US aspiration of forming the Trans-Pacific Partnership (TPP) and Asian pivot as a counter to Chinese growth of influence across the Asian region. Former CIA operative Philip Agee in an interview before his death in 2008 confirmed that much of the information collected by intelligence is used to assist U.S. multinationals rather than for national security purposes. Another former Australian intelligence officer said that the data collected had very little to do with 'the war on terror', but tended to be political, diplomatic, and commercial in nature. Australia is sometimes placed in the position where it collects intelligence which is used for the interests of the US over the interests of Australia, particularly n the commercial area. Australia's poor showing in gaining commercial contracts after the Iraqi invasion could be seen as testimony to this.

Ironically, Australia is cutting its foreign aid budget by AUD$4.5 billion over the next four years, while at the same time increasing its intelligence budget. This is not a good message to be sending out to the region if sincere and open engagement is truly sort by the Abbott Government. Asia is judging Australia by its actions, not rhetoric, and there appears to be a massive failure which the Abbott Government must quickly react to, if Australia's interests are to be safeguarded.

This means turning inward onto the security agencies themselves.

Now the security agencies have damaged Australia's relations with its neighbors, trading partners, and friends to the point where it could take many years to repair. Taking advantage of diplomatic immunity to collect intelligence could be akin to a partner being unfaithful and meeting with the expected anger and emotions.

One of the collateral effects of this scandal is that Australia has been found not to be true to its own democratic ideals. It has been found wanting, by disregarding its own policies, if not its own laws. This is not to mention the moral position Australia is in through its facilitation of target information for US drone strikes which many consider war crimes.

The prevailing attitude within the Australian Intelligence community that it is not accountable to temporary holders of public office must be knocked on the head with a thorough clean out of personal, if any creditability is going to be salvaged with its neighbors. Resignations must be forthcoming in the national interest.

Australia must be prepared for a strong backlash in Asia where Australia is now seen as being blindly aligned with U.S. security interests, thus making Australia “not of the region" and instead some alien small time treacherous power — therefore unwelcome in the region as a partner for the future. That is what the intelligence Tai Pans have done for Australia, cravenly hiding behind legislative protection of their identities. Australia's whole diplomatic service is in disrepute unless massive resignations quickly occur.

Finally, from the geo-political perspective, the Der Spiegel and Sydney Morning Herald reports came at a time when Obama's "no show" in the region for the Bali and Brunei Summits gave Russian Premier Vladamir Putin and, even more so, Chinese Premier Xi Jinping uncontested market-space to win the 'hearts and minds' of the region’s leaders (see image as top of page).

We may be watching a great shift in regional influence — one in which Australia may miss the boat.