Australian federal politics for beginners P2: The Nationals are not very national

For a party that only represents about 4.6% of the lower house vote, the National Party is decidedly not national but quite marginal, writes Stephen Williams.

STARTING LIFE as the Australian Country Party in 1920, the Nationals have always been the poor cousins in conservative coalitions, especially since the formation of the Liberal Party in 1944. The Nats – or "Gnats" as many people prefer to call them – claim to represent the interests of mostly non-metropolitan citizens.

The National Party’s heyday was in the 1930s when it peaked with about 15% on the vote, but its popularity began to diminish around the time of World War II and has been declining ever since. In the 2016 Election, it managed to get 4.6% of the lower-house vote, although this translated into ten lower-house seats – three seats in Victoria and seven in NSW – such is population distribution in our federal electorates. 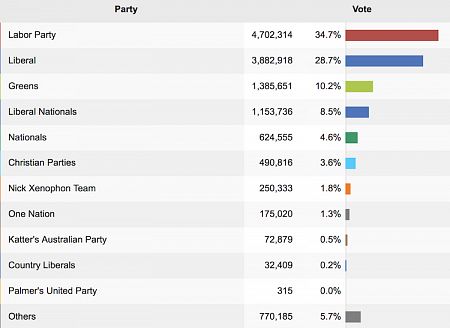 Actually, a name change is not a bad idea because the Nationals have very little presence in states and territories other than NSW, Victoria and Queensland, so they are not really national. Add to that their non-urban nature and you see they are very much a band of non-representative fringe-dwellers.

By comparison, in the 2016 Federal Election, the Greens managed just over 10% of the lower-house vote, but this translated into only one lower-house seat. This teaches us that it is not the gross number of votes that matter (especially in the lower house) but where those votes are located throughout electorates. This explains why the Greens (and other smaller parties) do much better in the Senate – where they currently have nine senators with 8.7% of the vote – because the total number of votes is more important.

We cannot easily compare the Green Senate vote with the Nationals’ Senate vote because the Gnats tend to run on a joint ticket with the Liberals rather than standing on their own two feet. Even so, the Gnats only have three senators (two from NSW and one from Victoria) with five LNP senators from Queensland — two of whom sit in the National Party room.

However you look at it, the Gnats are definitely not geographically national and their vote is not too flash when compared with the Greens. Yet, when the Greens side with Labor, the conservatives claim that Labor is compromised by extremists. But when the low-vote Nationals form a coalition with the Liberals and appoint the National Party leader as deputy prime minister, no less, everything is hunky dory and we see the sweet workings of democracy.

The Nationals’ vote – as a percentage – is slowly decreasing as Australia’s population becomes more urban, yet they maintain a high level of influence, with a firmish grip on certain lower-house seats.

The Nationals are natural bedfellows with the Liberals because they are anti-Labor, anti-union and anti-green. They are conservative, pro-private enterprise, love the British monarchy, the RSL, coal mining and fossil fuels and pumpkin scones.

Yet the marriage of convenience with the Liberals is often fraught because the rural sector often wants different things to the urban conservatives — especially on issues like tariffs and trade. A good case study is the hatred that existed between Liberal PM Billy McMahon and Country Party Leader (and Deputy Prime Minister) John McEwen in the 1950s and 1960s. These guys were usually at each other’s throats in cabinet and outside it, with McEwen even vetoing McMahon’s bid to be prime minister after the sudden death of Harold Holt in 1967.

Since the Liberal Party cannot govern nationally without the support of the Gnats, the latter group has a power way beyond its popularity, as evinced in the secret deals that are struck when a governing coalition is formed. For instance, when former Prime Minister Malcolm Turnbull formed his coalition with the Barnaby Joyce-led Nationals, it is speculated the deal had restrictions on how the same-sex marriage issue could proceed and what Turnbull could do on climate change.

Is there anything more shocking and undemocratic in Australian politics today than a secret deal that hobbles a prime minister and government because a piss-ant party with 4.6 per cent of the national vote – and no real presence in some states and territories – can throw its weight around due to an outdated electoral system?

If you want a case for electoral reform, it is hard to think of a clearer one (although Richard Walsh’s 2017 book, Reboot, gives us plenty of other reasons).

What the Nationals lack in popularity, sophistication and polish they make up for in "colour". The days of stable leadership under stalwarts like Doug Anthony and Ian Sinclair are now a faded memory as we move into the days of Bob Katter, Rob Oakeshott and Barnaby Joyce.

The first two names alert us to the propensity of Nationals to defect when they realise their mistake. The last name almost speaks for itself in terms of "own goals" — and could only be outdone in terms of cartoon fodder by Queensland’s former Premier, Joh Bjelke-Petersen.

Joyce’s affair with a staffer is unfortunately still fresh in our minds, so I will not dilate here, save to say he was a hypocritical champion of traditional marriage during the same-sex debate. Nor should I need to remind readers how the couple sold their story to the media. However, some readers may have forgotten his genius plan to move the pesticides authority to his own seat of New England. What an amazing coincidence, that of all the locations in Australia, his own seat turned out to be the best place for the big move? Apparently, the potential cost ($25 million initially but almost $250 million a year if things went haywire) would be well worth it. What a shame only eight of 198 staff agreed to move.

Also on the subject of being colourful or quirky, what are we to make of the recent revelations that the Nationals have been infiltrated by extreme right-wing types, now expunged? It is rather interesting that these right-wing extremists did not choose One Nation but still indicative of the National Party's non-national support base.

Barnaby Joyce, Vikki Campion and $150,000 worth of privacy https://t.co/sMXkqfL3g7 @IndependentAus

Stephen Williams writes mainly about politics, economics and the environment.

Muppet population plan will be meaningless

11 January 2019, 3:30pm Without a fundamental change to economic thinking, we will continue down the ...