Anzac Day: Lest we remember

Lest we forget. It is the defining phrase of ANZAC Day. And yet the Day itself is about forgetting. It really should be lest we remember because ANZAC Day is about denying history.

ANZAC Day forgets the slaughter that was the war. It forgets the reasons for the war — a battle between late developing German capitalism against the established imperialist and colonialist powers for a place in an already divided up world.

Australia’s role was to support British imperialism because that was in the interests of our own ruling class and allowed us to expand our own imperialist interests in the Pacific region. Our ruling class got hundreds of thousands of young men and boys to volunteer for this slaughter with propaganda about god, king and country.

ANZAC Day does not ask why 60,000 Australian men and boys died in this far away imperialist butchery. It does not mention the class divisions in Australia society that saw the rapid growth of the revolutionary group, the Industrial Workers of the World, before the freedom loving Billy Hughes under his Unlawful Associations Act made it illegal to be a member and then smashed their printing presses.  The state also framed 12 members for starting fires in Sydney.

The supporters of ANZAC Day do not mention the class struggle over conscription that saw Australian voters twice reject it, roughly along class lines. Even large minorities of serving troops voted against. The margin voting for was only 72,399 to 58,894 in the first referendum and 103,789 to 93,910 in the second.

Poster from the second conscription referendum: voting against compulsory war service was deemed to be disloyalty by the rulers (Image awm.gov.au)

Why do those pushing ANZAC Day as a day of national unity and remembrance never mention the 1917 General Strike? Why don’t they tell us that the war spawned working class revolutions across Europe, including one in Germany that ended the conflict?

Those rulers who celebrate the day never mention that many of those who survived the war understood the imperialist reasons why they were sent to the slaughter and some became socialists or communists.

War is the default setting for capitalism, but not for workers. Australian capitalism has a history of almost continual war, against both the original inhabitants and against other countries.  So to get Australian workers to kill workers from other countries there has to be an ideological substitution of nation for class.  ANZAC day does that par excellence.

"But, but, but..." say many, "we are remembering the dead and the horrific nature of war." True. However these individual reasons do not change the fact that the ruling class uses ANZAC Day to normalise war. Why else was Malcolm Turnbull in Afghanistan on this ANZAC Day other than to politicise the event for his and his class’s advantage?

The Australian ruling class are warmongers, but they have to convince workers to fight for their version of capitalism. Nationalism is one way to do that. Jingoism is another. So is militarisation.

Why do we not celebrate that war that saw the number of Aboriginal people, according to historian A. Dirk Moses, between 1788 and 1911 fall from an estimated 750,000 to around 31,000?. After all the indigenocide formed Australia much much more than the defeat of the invading forces at Gallipoli did.

A better war to remember surely would be the Frontier Wars, that period that established Australian capitalism by dispossessing and killing the original inhabitants, and characterised by the magnificent resistance of Aboriginal and Torres Strait Islander people.

But to remember that would expose the cancer at the heart of Australian capitalism. Hence the manufactured ruling class "remembrance" of the slaughter and defeat at Gallipoli.  The ruling class choose their celebrations and "remembrances" carefully. They are about forgetting.

What happens when an elder points out the reality at an ANZAC Day memorial? She is criticised for being too political when she remembers the invasion of her country and the slavery that white Australia imposed on her forebears.

(For the historically forgetful, all were theatres of conflict or occupation for Australian troops in World War I.)

The backlash against Yassmin has been huge. She took down the post almost immediately and apologised for any offence caused. Government backbencher and virulent free speech for the 1% campaigner George Christensen set up a petition to have the ABC to sack her.

As reported in The Australian, The Deputy Prime Minister virtually threatened the ABC with more cuts if they did not sack her: 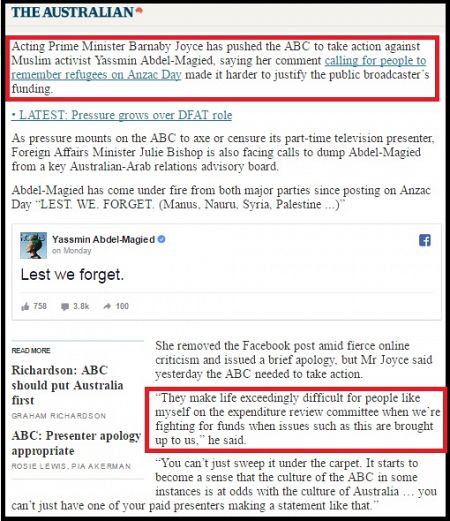 Failed, and now well and truly former Prime Minister Tony Abbott summed up the authoritarianism inhered in the day when he said (from the same News Corp article):

So there you have it, straight from the donkey's mouth. ANZAC Day is not only about normalising war; it is about making us all think the same, and forcing us to accept ruling class values – the values Tony Abbott and Peter Dutton share – as our own. ANZAC Day is the hive mind of the ruling class.

The vitriol against Yassmin is sickening — and all because she, as a Muslim woman of colour, posted her truth.

It's quite simple, freedom of speech is all about white people saying things ABOUT Muslims and people of colour - not the other way round!

‘In a time of universal deceit, telling the truth is a revolutionary act.’

Yet when government bans journalists from reporting the truth of what is happening in, to use the words of Pope Francis, the detention centre "concentration camps", such as those the Australian Government runs on Manus Island and Nauru under threat of two years jail, there is nary a peep from the "free speech" hypocrites.

Something else happened on ANZAC Day too. A man murdered his wife and then killed himself. Nothing much from the media, who are too busy trying to burn the  black Muslim female "witch" Abdel-Magied to worry about another woman being murdered by her partner. She was number 15 this year.

The war on women continues unabated and nothing happens. Oh, that is not quite right. The Turnbull Government has cut funding for women’s refuges and domestic violence services.

It is all about priorities and the ruling class cult that is ANZAC Day hides the reality of Australian society.