Popular media personality, Annabel Crabb, admits being a little "snarky" with her 'Hey hey! Ho ho! those 70s demos have to go!' piece on recent student 'rabble-rousing' against the Budget. Judy Crozier reports.

BACK IN 1381, English peasants hit the streets in a very big way under Wat Tyler. They had some major grievances against the king. The Chartists drew together another great rally in1848, because they thought the vote should be universal.

Well, at least for men.

Astonishing numbers marched against the Vietnam War during the moratorium days of the late 60s and early 70s, here and of course overseas. 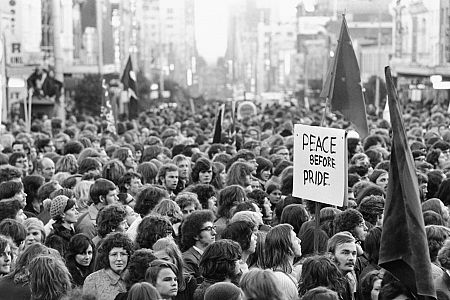 Moratorium to End the War in Vietnam, Melbourne, Australia, September, 1971.

There were many marches, rallies and protests before 1381, no doubt, and certainly countless numbers between then and now.

More recently, we’ve had rallies against Kennett, against Howard’s union bashing, against Australia’s insertion into the Iraq war, against the sum of Abbott’s attempts at Right Wing Social Engineering.

Last week, we’ve had (finally!) some vocal, energetic and public protests by university students. They upstaged the smaller protest by pensioners — whose action may have been less attractive to cameras because they didn’t include running pell-mell or sitting on hard streets. Getting up again might have been an issue. Perhaps they’ll bring cushions next time.

The point is this. The tradition is an important one — public protest is a right we hold to ourselves. The more people try to prevent us from protesting publically, the more passionately we hold it to ourselves. This right of ours.

‘Public’ is the salient word here. 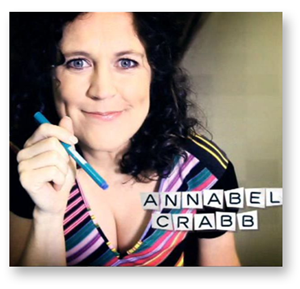 It is no doubt the very thing that makes commentators who have clearly had a cossetted existence quite nervous, such as Annabel Crabb. Now, I have nothing against Annabel. She is witty and can make the odd telling point, though frankly, like many, she misses a lot by evading discussion of realpolitik.

It may be that there is even sympathy for students there, and she just thinks noisy rallies and marches will only work against the demonstrators viz a viz public relations and all.

This is to completely misunderstand the point. Firstly, good luck with telling 20-somethings how to vent their anger. Or anyone else who is cross enough.

Secondly … not only is a rally or march a public event that shows to everyone what you feel in a personal, visible way, but it is also a show of strength. This in itself is a unifying factor to participants, and an encouragement to all those others witnessing the display who believe as they do. Further, protestors are all taking to streets that are familiar to them, and, in a way, laying claim to them, albeit temporarily.

In a way, protestors are saying:

“This is where we live. This is our life.”

“We are taking our view right up to you. You must acknowledge us, because here we are.”

@clifford336 Hi Jim - thanks for your thoughts. Appreciate them. Think you're right about the tone. I could have been less snarky. AC

Similarly, slogans and chants are traditional to almost any crowd, and serve to convey both a simple message to anyone watching and also link the participants. Not to mention chanting gives them something to do.

Annabel has a problem with typical student rally chants, as well. She must have had a very dull youth.

There’s a lot in having a rally with attendant march, old-fashioned though Annabel may claim it to be, and I’m afraid making a meaningful film or doing a power-point demonstration just wouldn’t be the same.

Annabel’s is a strange argument against student protest in the streets that arises, perhaps, from a couple of decades of public mutedness in general, and among both commentators and students in particular.

John Howard succeeded in shutting down the expression of opinion in print and elsewhere with his denigration of the ‘chattering classes’.

Somewhere, somehow, commentators blanded themselves out and started claiming there is no Left or Right anymore.

Well, the Far Right is here now, and is quite recognisable. And it isn’t just students who are angered and frightened by its agenda.

But let me finish with this: back in the day, when I was first at University and a regular at rallies and marches, I recall, certainly, the older folk who complained about such things.

But I also recall those who applauded the passion of young people.

That’s where I am now and, frankly, I’m pleased and proud that the student body is, at last, awake and active.