And what if Labor wins?

Labor's capitulation on penalty rates suggests they may have abandoned the softly softly "touch of Bernie" approach and with it, perhaps, the election, writes former ATO Assistant Commissioner John Passant.

IT IS possible Labor could win the 2 July election. These are words I never thought I’d write.

A few months ago, Labor were dead in the water. Now they have a chance.

The media will put the swing to Labor down to Turnbull’s inaction. I think it is much more than that. It is mainly about class.

Labor’s selective and heavily muted class war announcements – royal commission into the banks and the earlier minor tax changes – create or reinforce the picture of Labor standing against the big boys. The government is obviously looking for ways to undermine that with its talk about "strengthening" ASIC and superannuation tax changes. That means it is following Labor.

The ALP may continue this disguised and heavily restrained "hint of class" strategy and attempt to re-engage with its base and former supporters — a supporter base which has been eroding over time. If they do, they have a chance.

However, at the same time, Labor as a contradictory party of capital and workers – a capitalist workers’party – needs to show the ruling class it supports them too. Labor’s proposed royal commission into the financial industry might have frightened not just the big banks but non-financial bosses too. So the party needs to show it is committed to the bosses too.

Hence Bill Shorten’s comment yesterday saying Labor would accept whatever the Fair Work Commission ruled on Sunday penalty rates, including cutting them back to Saturday rates. According to Michael Koziol in the Sydney Morning Herald, when Shorten was asked on Melbourne’s 3AW whether a Labor government would accept the commission’s decision, Mr Shorten said: “Yes.”

“I’ve said I’ll accept the independent tribunal. While Sunday rates should not be cut 'just like that', it was ultimately up to the commission.

I’ve got my opinion. At the end of the day though, the way minimum wages get set in this country is through evidence, it’s through the submissions of workers, their representatives and employers."

There was a time when @AustralianLabor supported workers. Now leaning too far to the right to be relevant #auspol https://t.co/bE0XxgmbHM

Abandoning workers who rely on Sunday penalty rates (and eventually on Saturday rates which will be under downward pressure if the decision is to cut Sunday rates down to Saturday rates) is Shorten’s attempt to curry favour with the ruling class. It is the reality of a Labor Party committed to managing capitalism.

Giving the all clear to the Fair Work Commission to cut Sunday penalty rates is a perfect example of the dominant and dominating capitalist side of Labor and its nature at the moment of being as a CAPITALIST workers’ party well on the way to becoming a capitalist party. 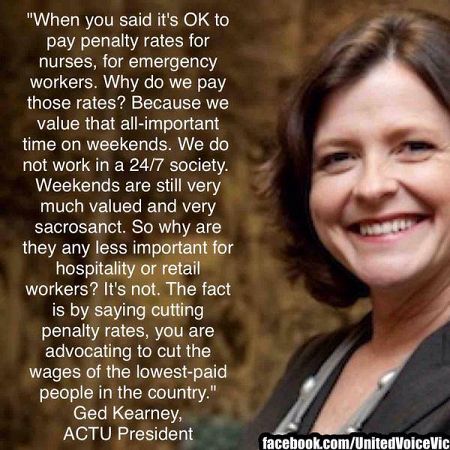 It won’t be the last rotten policy Labor adopt, or if they win government, implement. The nature of the party as a capitalist workers’ party managing capitalism mandates that in a time of economic problems for the bosses (essentially the systemic one of falling profit rates) Labor in power will (and must, from its point of view) attack its own base — the working class and the poor.

Shorten’s comments today on penalty rates signal a retreat from the "hint of class" approach the ALP seemed to be developing around themes like the royal commission into the finance industry and their "crackdown" on tax avoidance and other minor tax the rich changes.

Labor's leader turns his back on workers again. Disgusting.... https://t.co/RgZYdKNFwI

The back down might slow or even reverse Labor’s momentum and support. If they want to win in July, we need more class rhetoric and action from them. The capitulation on penalty rates suggests they may have abandoned the softly softly "touch of Bernie" approach and with it, perhaps, the election.

This story was originally published on John Passant's website en Passant on 21 April 2016 and has been republished with permission. You can follow John on Twitter @JohnPassant.