An Abbott abroad III: What the watching world wrote

Tragically for Australia, the conduct of the blundering new government and its boorish leader is being observed by other nations — and reported.

Two themes dominate recent overseas media reports on the Abbott Government. Dismay at the ineptitude of international diplomacy. And bewilderment at an austerity budget imposed on the best-performed economy in the world.

Reflecting on Abbott’s recent visit to Canada Christopher Hume at the Toronto Star skewered both Canada’s and Australia’s leaders in a piece on Monday headed ‘Stephen Harper and Tony Abbott deserve each other’:

'What a pair they made, Australian Prime Minister Tony Abbott and Canada’s own Stephen Harper — Gollum and Mr Potato Head — publicly thanking each other for their honesty in Ottawa last week. Unlike most world leaders — if that’s the right term — these two want to be frank; they will do nothing to stop global warming, they proudly declared, if it might hurt the economy.'

'... outside Australia will always be the man who was sliced and diced into little pieces in the famous ‘misogyny speech’ by his predecessor Julia Gillard delivered in 2012. After being reamed out so definitively, it’s a wonder he can still show his face in public.'

But after Canada, Abbott did, indeed, show his face in the United States.

What he was told in private by various high-ranking officials remains confidential.

However, influential congressman Henry Waxman blasted Abbott publicly, telling him that repealing the carbon pricing scheme was a "mistake":

Two national leaders aghast at Abbott’s and Harper’s obstruction of efforts to contain climate-related catastrophe are the presidents of Kiribati and the Marshall Islands.

An article in Terra Argentina reported the alarm of the Pacific islands’ leaders:

'For his part, the President of the Marshall Islands, Christopher Loeak, said: ‘I'm very concerned that the prime minister [Abbott] is setting the wrong tone in what needs to be a very determined effort to tackle climate change’.'

In a major departure from protocol, The China Daily openly criticised Abbott’s tardiness in finalising the free trade agreement.

'Yet a free trade agreement with China, representing an opportunity several orders of magnitude greater than both deals combined, remains – after nine fruitless years – unfulfilled.'

In France, Sud Ouest reported mirthfully on Abbott’s reintroduction of knighthoods. It noted that Queen Elizabeth II was advised of the move, but not Abbott’s ministers.The article suggested this was un bond dans le passé (a leap into the past).

The French Courrier International agreed, asking of Abbott, 'vit-il dans le passé?' (does he live in the past?)

The Times of India reported protests over Tasmania’s endangered forests.

It noted the vast scale of Australia's timber industry with more than 66,000 workers and annual turnover of A$22 billion. Then claimed Abbott was 'wanting more forest available'.

'The opposition Greens Party has labelled Abbott the "dig it up, cut it down prime minister" with the government's environmental credentials under close scrutiny since coming to office last September.'

'They have no shame!' declared French journal L’Humanité in its report on Australia’s May budget.

'The conservative government intends to push the legal age of retirement to 70 years by 2035. They are blaming it on the ‘fiscal crisis’, according to Canberra.'

'A mining boom, driven by trade with China, has helped Australia to weather the global downturn without suffering from a recession; the country has enjoyed 22 years of uninterrupted growth ... Mr Abbott complains that his government inherited a ‘debt and deficit disaster’ from its predecessor. Yet Australia’s net debt ... is quite modest compared with most other rich countries.'

An extended New York Times report analysed proposed changes to university fees. Headed ‘An uproar in Australia over proposal to deregulate tuition’ the analysis quoted all sides of the debate.

Last word was given to chair of Universities Australia Professor Sandra Harding:

"A reasoned and sensible approach to a developing marketplace just cannot be achieved immediately ... As events in the recent past have shown, undue haste and poor execution pose grave risks to even the soundest policy intent.”

'Tony Abbott is accustomed political headwinds. But the Australian prime minister did not expect an attack by a 67-year-old telephone sex worker.'

The thrust of the article was dismay at the decision to cut welfare as the first move. It reported storms of indignation – 'landesweiten Entrüstungssturm' – across Australia.

This piece also observed the embarrassment of the clumsy wink – clin d'oeil maladroit – and noted that Abbott is réputé pour ses gaffes – famous for his blunders.

Even Rupert Murdoch’s The Times in London reported

The one positive story about the Hockey Budget was in Murdoch’s New York Post, which noted approvingly the government’s

'... layoffs for 16,500 government workers ... cuts in entitlements, cuts in welfare, new fees on visits to the doctor’s office, slashed subsidies to businesses ...'

True to form, the journal just made up that last item.

The next wave of negative stories looks like being on Australia’s bizarre decision to change its terminology for East Jerusalem from 'occupied' to 'disputed'.

The International Herald Tribune ran a piece pondering why Australia was 'seemingly going out on a limb' at this time.

Originally from The BBC, the article quoted Independent Senator Nick Xenophon claiming it was

'... an extraordinary and reckless departure from the bipartisan approach of the last 47 years.'

Finally, that hilarious video by John Oliver gets wider and wider coverage:

‘Tony Abbott, President of the USA of Australia’.

‘John Oliver rips Aussie PM a new one after he offends women, gay people and the Irish’.

‘... besieged with religious bigots in positions of power’.

‘The laughing stock of the world’.

Unfortunately they are laughing at Australia, not with us. 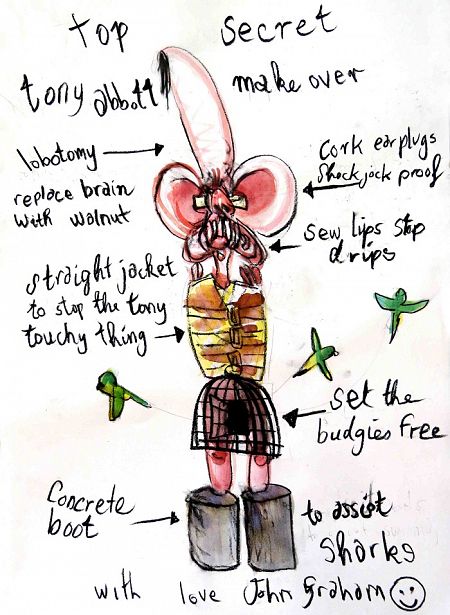