An Abbott Abroad II: Tony no-friends wants to be like Mike

Part Two of Alan Austin’s report on Prime Minister Tony Abbott’s bumbling visits to Indonesia, France, Canada and the USA you will not find in the mainstream media.

Both have been climate science deniers and are opposed to carbon taxes. Both won office despite manifest lack of aptitude and suitability and both are embattled at home with mounting opposition to failing policies.

Abbott embarrassed Harper and himself this week with his public call for an alliance of Australia, Canada, New Zealand, Britain and India to oppose global moves towards emissions reduction led by Europe and the US.

Bizarrely, Abbott had not sounded out his potential partners in private. So, not surprisingly, the scheme was immediately slapped down by Britain and New Zealand. Absolute silence from India.

“I think you can take it the UK won't be joining an alliance against regulation,” said bemused British climate and energy minister Greg Barker.

“We are engaged with Australia and New Zealand, encouraging them to take a responsible proactive part in seeking an ambitious global treaty on climate change.”

Abbott met general secretary of the United Nations Ban Ki-moon on Wednesday to discuss climate change among other matters. The UN chief stressed that he expected Australia to participate actively and constructively in the global effort against climate change.

In pursuing his spoiler alliance, Abbott has blatantly lied several times. The man, it seems, cannot help himself. Even when the world is watching.

Exhibit A was Abbott’s extraordinary claim in Canada:

“I am encouraged that President Obama is taking what I would regard as direct action measure to reduce emissions, this is very similar to the action my government proposes in Australia.”

Melbourne University’s head of political science Professor Robyn Eckersley was gobsmacked at such a glaring falsehood:

“I can't see on Earth how Australia can make that claim,” she told ABC Radio.

“What emission reductions we have achieved recently are a result of the carbon pricing scheme that the previous Labor government put in.

“Once that's dismantled, our emissions will start to grow ... So, how on Earth can Australia claim that it's actually doing more than the US?”

Exhibit B was Abbott’s false claim that there is no global momentum toward carbon trading anyway:

Exhibit C was Abbott’s barefaced lie in Ottawa on Monday that he has never supported carbon taxes:

“That's why I've always been against a carbon tax or an emissions trading scheme because it harms our economy without necessarily helping the environment.”

Asked by Bazza what Australia will do on Iraq, Tony thought for a minute & just winked. He's a true Statesman. pic.twitter.com/xj7ebilAKz

In fact, Abbott has had several contradictory positions on climate science and remedial policy, including clear and strong support for “a simple carbon tax” from 2009 through to 2011.

Even Rupert Murdoch’s Business Spectator called Abbott out on this week’s barefaced lies in the international arena.

'In reality Tony Abbott’s $2.5 billion Direct Action Emission Reduction Fund will do next to nothing to reduce the emissions intensity of Australia’s power supply.'

Climate was not the only source of confusion and contradiction for the hapless PM in the United States.

He announced that new rules were needed to prevent tax avoidance by big corporations. And simultaneously that Australia was cutting red tape to make it easier for business to operate.

So what does he want? More rules and regulations to control businesses? Or fewer rules?

This hypocrisy earned him a stinging rebuke in The Guardian in Britain in a piece headed:

‘It's a bit rich for Tony Abbott to lecture the US on fair taxation’.

'If the prime minister wants to have a discussion with anyone about taxation fairness, talking through the specifics of unfair superannuation provision in his own economy are a really good place to start.'

All this has provided rich fodder for the world’s satirists and comedians.

A piece in the Algerian media is headed:

'Australia is a beautiful and rich country that is consistently ranked in the top 10 best-managed countries where life is good, but [it] is ... led by a narcissistic, ignorant and xenophobic [prime minister].'

'... gaffes, faux pas and missteps are a big hit with US comedians.'

So much so that:

'For many Americans, they're the only thing they know about Australia's political life.'

But among the jibes by humorists and the serious concerns of world leaders, another friend emerged this week.

That was king of the right wing nutter shock jocks, Rush Limbaugh, who applauded Abbott’s stance against Obama on climate:

"I'm sorry, folks, this is big, and this is something that ought to inspire Republicans domestically.

"The Australian prime minister is pushing back, and trying to find willing countries to go along with him to stop Obama on this madness.

"I got a better headline than ‘Tony Abbott Seeks Alliance to Thwart Obama on the Climate Change Policy’. The better headline would be: ‘World Leaders Think Obama Needs to Be Stopped’, because that's what this story is all about.”

Just as well Abbott now has two friends abroad. Because his supporters at home are dwindling rapidly.

Issues he will face on return are reflected in these headlines:

Even his News Corp cheer squad has found it now must report negative stories about the Government, or report nothing from Canberra at all:

And this in The Australian, which is obviously feeling extreme buyer remorse after campaigning for Abbott’s prime ministership non-stop for three years:

‘Tony Abbott is not only friendless and clueless, he walks backwards and at the rear’

And then today, to top off this tour by the person the French have dubbed la roi de la gaffe (king of the gaffe) came a diabolical gaffe that is sure to raise the ire of even disengaged voters in sports obsessed Australia.

From a report in the Sydney Morning Herald:

Australian Prime Minister Tony Abbott has been accused of being many things, but a Socceroos fan is not one of them.

Draped in a Socceroos scarf, Mr Abbott has called skipper Mile Jedinak "Mike" as he wished Australia well in a YouTube message just hours before they take the field in their opening World Cup clash against Chile in Cuiaba, Brazil on Friday (Saturday AEST).

"Ange, Mike and the Socceroos, in this World Cup you have the opportunity to make the world game our national game," Mr Abbott said.

While striker Tim Cahill would be the most high profile Socceroo in the current squad, Jedinak, as the captain of English Premier League side Crystal Palace, is far from unknown.

This is just the latest in a long line of gaffes for Mr Abbott, who just this week embarrassingly called Canada "Canadia".

Who knows what effect this insult had on the team? Nevertheless, Australia looked unsteady early, going two goals down in the first 15 minutes, before recovering their composure and eventually finishing 3-1.

There will be some rather irate Socceroos fans today — but not with their valiant team:

Perhaps PM Abbott would be wise to go back to friendly 'Canadia' — and stay there. 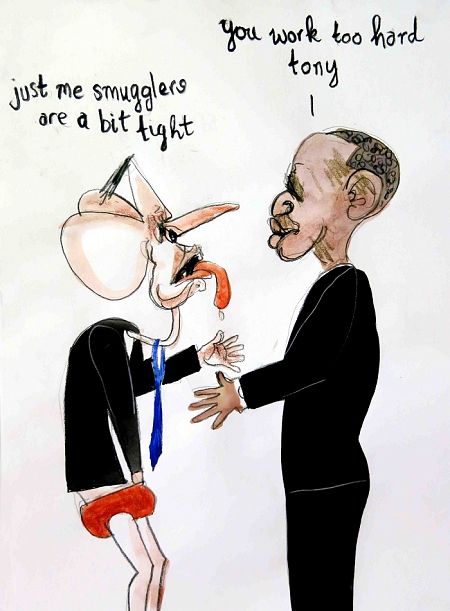 A selection of John Graham originals (including the above) may be purchased from IA's online store. (See more of John's political art on his Cartoons and Caricatures Facebook page.)