Emmy Award winning US journalist James Moore says, even though he chokes up at the national anthem, he is worried and ashamed about his nation right now. Is this where Australia is heading? 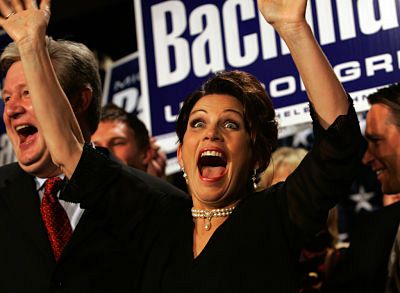 UP ON THE South Plains of West Texas, the land is flat as a pool table and the interminable sky has made some souls crazy. A few have been inspired. Lubbock, a community sitting in the middle of the emptiness, was hometown to rock and roll legend Buddy Holly. In Texas, though, like much of America, inspiration appears too often to be supplanted by crazy.

And there is a new political nut job every day.

Judge Tom Head, an elected county official in Lubbock, went on local television to make his case for a tax increase to hire more police and fire officials, which, in that ultra-conservative community is a kind of political suicide. More taxes? Head lost his head when he told the nodding interviewer that if President Obama were re-elected there would be civil war.

“He's going to try to hand over the sovereignty of the United States to the UN, and what is going to happen when that happens?” Head asked. “I'm thinking the worst. Civil unrest, civil disobedience, civil war maybe. And we're not just talking a few riots here and demonstrations, we're talking Lexington, Concord, take up arms and get rid of the guy.”

The program host did not jump in and confront the loony elected official. He let him rant on without further questioning.

"Now what's going to happen if we do that, if the public decides to do that? He's going to send in U.N. troops. I don't want 'em in Lubbock County. OK. So I'm going to stand in front of their armored personnel carrier and say 'you're not coming in here'. And the sheriff, I've already asked him, I said 'you gonna back me' he said, 'yeah, I'll back you'. Well, I don't want a bunch of rookies back there. I want trained, equipped, seasoned veteran officers to back me."

If U.N. troops ever arrive on American soil, they really won’t bother with Lubbock until very late in their battle plan, I can assure you.

There is very little civil discourse left in America and those responsible for its degradation are suddenly suggesting a civil war is an inevitable consequence of the president’s re-election.

Lubbock, which once inspired a song lyric that said, “Happiness is Lubbock, Texas in your rearview mirror,” hardly has a corner on the crazy in Texas, or the rest of America. The land of cattle drives and cowboys has given 14 years in office to a governor that has filed lawsuits to keep women from getting counseling on abortion and leads a political party in the state that wants to turn gay marriage into a felony and imprison any official who performs a gay wedding ceremony.

But that’s really nothing.

Half of the English-speaking world is presently laughing at America because of an absurdly idiotic statement by a U.S. Congressman from Missouri, a state situated in our “heartland,” the part of the country that is supposed to reflect our rugged individualism and “show me” sensibility.

Todd Akin was on a broadcast and was being interviewed on the question of abortion. American conservatives have been pushing the notion of “personhood” for zygotes, female eggs just fertilized by male sperm and beginning cellular division. The Republican Party, including elected members of congress like Akin, is promoting personhood amendments on statewide election ballots. Not only do they want full human rights for a conglomeration of cells, Akin’s party wants to eliminate abortion for any reason, including rape, incest, or the life of the mother being at risk.

Which is how Akin’s idiocy bloomed.

The interviewer, confounded by the restrictions on ending trouble pregnancies, found it absurd that Akin and his political party would not even relent on cases of incest. The congressman, though, simply did not believe incest could cause pregnancy.

“It seems to be,” Akin said, “first of all, from what I understand from doctors, it’s really rare. If it’s a legitimate rape, the female body has ways to try to shut the whole thing down.”

The statement was made by a member of the U.S. House Committee on Science, Space, and Technology. His research appears to have uncovered a distinction in types of rape.

This was not anomalous insanity, either. The Republican Party that is about to nominate Mitt Romney for president has a policy platform that originates from thinking like Akin’s. Party members, however, are running from Akin, even though his election as U.S. Senator from Missouri might swing the majority of the upper chamber of Congress over to the Republicans. Even “Bush’s Brain,” Karl Rove, whose political action committee has hundreds of millions to spend to help conservatives win office, has pulled his group out of Missouri, after spending $900,000 USD on the campaign.

If only that were where the crazy train came to a stop.

In the farm country of Iowa, U.S. Representative Steve King was being interviewed on a TV station on the same topic just two days after Akin’s ignorance was afoot in the land.

"You support the No Taxpayer Funding for Abortion Act that would provide federal funding for abortions to a person that has been forcefully raped,” the interviewer began. “But what if someone isn’t forcibly raped and, for example, a 12-year-old who gets pregnant? Should she have to bring this baby to term?"

"Well I just haven’t heard of that being a circumstance that’s been brought to me in any personal way and I’d be open to hearing discussion about that subject matter.”

Discussion wouldn’t do any good. King later blamed the media for distorting his words but it was clear he didn’t think a pubescent girl could be impregnated by rape or incest. Perhaps the biological mechanism to shut down the pregnancy, which had been identified by Akin, has already developed by age 12.

Akin and King are part of an increasing group of marginally sane political candidates in the American electoral process. The Republican Party, which is increasingly controlled by a radical group known as the Tea Party, also recently nominated a candidate for the U.S. Senate that believes President Obama does not believe in national sovereignty and wants to get rid of golf courses and paved roads as part of a conspiracy he entered into at the United Nations. They are all dangerous and disturbing religious zealots and are beginning to harm what goodwill America has left on the international diplomatic stage.

Who are we to call anyone’s beliefs crazy?

I love my country. I have traveled to every state, climbed its mountains, rafted its rivers, listened to jazz in New Orleans, slept on the Atlantic Ocean beaches, motorcycled its deserts, fell in love with our determination to be leaders for improvement of the human condition, and, yes, I tend to get choked up at the national anthem. I know our flaws are many and manifest and we intervene in places we ought not but I also know that we are generally a good people. We have demonstrated as much when we are asked for help. I confess to being a proud American.

But right now I am ashamed for my country.