Opposition Leader Bill Shorten was the guest on ABC Insiders last week and he spoke well on a number of issues, however something important surfaced when he was queried on Labor Party reform.

Shorten told viewers that he was taking measures to bring the ALP into touch with community expectations by increasing rank and file participation within the Party. However the most important thing Bill repeated ‒ several times ‒ was about having the best candidates possible.

On that note, I’m sorry to say, Bill has a long way to go to achieve his goals.

The fact is, there are factional players who are seeking to ensure the worst candidates are promoted, as they are the easiest people to control.

Here in NSW we are going through the often entertaining and usually ugly process of pre-selection, this time for the upcoming State election.

Some of you may recall an article I wrote regarding the candidate for Seven Hills — Susai Benjamin. The article went into some claims that have been made about the finances of his Toongabbie Legal Centre and others regarding his comments about domestic violence.

Many feel this is candidate that will see Labor lose the seat, which it has held for over half a century. However given he is alleged to have the branches stacked full of supporters who only appear at pre-selection time, nobody had enough backers to stand against him.

This article saw me receive a bit of grief from Federal Labor member Laurie Ferguson, who is the man backing Mr Benjamin for the Labor candidacy despite the outcry from the public, the members, and many within the Party itself. Mr Benjamin is such a questionable candidate, it took over four months for him to get through the Candidate Review Committee — a committee whose recent final decisions have themselves been highly suspect.

@madwixxy you are an habitual Smear merchant &apologist for machine domination.You are against rank&file local members picking candidates

It may be that, after Mr Benjamin loses the Seven Hills seat, Laurie Ferguson will put another puppet in place to have another crack, perhaps even his long time close family friend Fiona Field, who Ferguson's branch members have claimed to have met at a Ferguson Christmas function.

Ferguson has also put the considerable weight of his ego and support behind Julia Finn for the seat of Granville. Julia Finn is a councillor on Parramatta Council, who so far has ‒ as far as I can see ‒ done an exceptional job at doing nothing much.

Ferguson likes these candidates, because they are easy to control, will always back his point of view and will vote in the way he suggests.

One problem with a party full of puppets is that it will end up without a decent leader.

Branch stacking is a problem in both sides of politics, but there is no doubt it is acting as a cancer within the ALP and is a practice at which Laurie Ferguson appears exceptionally capable.

I find it extremely ironic that Ferguson would claim that I am against democratic rank and file process, given that he was initially parachuted into his Federal seat without the member pre-selection he now apparently holds in such high-esteem.

I am not against rank and file democracy — I am simply against branch stacking.

Over the weekend it was reported in Fairfax that the long time and well-respected Member for Auburn Barbara Perry was in trouble, with the allegation another of Laurie Ferguson's puppets has been busily stacking the local branches against her.

Barbara Perry is a member whom would fit under Bill Shorten's “best possible candidates” category. She is well-respected, works hard for her community, is a former minister and is a current shadow minister.

She does not, however, have Laurie Ferguson’s strings attached to her and so her endorsement is vulnerable.

It is understood that complaints about branch stacking have been made to Labor’s Sussex Street state headquarters  over the former Auburn mayor Hicham Zraika’s sudden surge in supporters, which has rosin to around 300 in the Regents Park branch since 2012.

Many of these supporters live in Zraika’s modest two bedroom home according to Labor Party records and many others live in houses that must be overflowing with member’s families. Nine members are even registered as living at a business address.

Just as he has done with the numerous complaints regarding Susai Benjamin’s branch stacking that have gone to Sussex St, NSW Labor Secretary Jamie Clements has dismissed all the complaints involving Hicham Zraika.

Jamie Clements is reported to have said at the State Labor conference, he wanted to see

Fortunately for Mr Ferguson's friends this new rule of Jamie Clements does not seem to apply — in fact, given recent goings on, it would even appear to be encouraged.

The number of questionable candidates with Clements’ blessing and Ferguson’s strings have some members questioning the closeness of the relationship between the two Party powerbrokers.

The branch-stacking behaviour of people like Susai Benjamin and Hicham Zraika should see them kicked out of the Party, not chosen to represent it.

For State Secretary Clements, it is about time Labor Party members saw some action around this issue, not just more hollow words.

Why is this a debate that has to be pushed aside and done with factional leaders behind closed doors, while Bill Shorten announces to the rank and file they are going to have a bigger say?

Why is it that whenever I have a conversation with someone in a position of power regarding party reform it always starts with the immortal words:

“This is off the record.”

It’s about time we had something other than spin and lies put on the record; the membership expects and deserves better.

Jamie Clements, I hope you are up to the task. 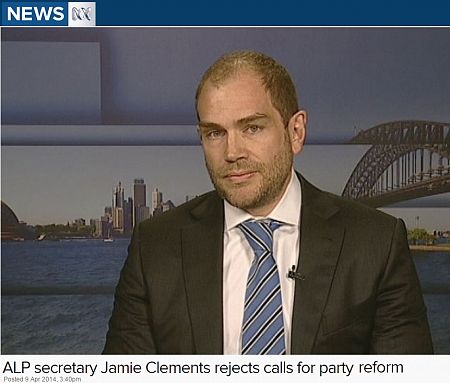 Peter Wicks is an ALP member and a Labor candidate at the last NSW State election.

ALP's endorsement of domestic violence ... http://t.co/dXDowqsoTM Why does ALP continually let itself down with their unwise endorsements.