We are at the Labor Party Queensland State Conference at the Mercure Hotel on North Quay in Brisbane City. I am sitting in the observers section, to the right of the auditorium. The delegates had seemingly been placed according to their affiliations.

This is promising to be a most interesting convention.

A delegate in the foyer was telling me that the left have a slight majority in the voting. There are furious attempts happening from the right to try and poach a few votes. A young member of the Labor Forum reckons that the excitement will begin about 1pm when rules for the selection of the parliamentary leader are voted on.

There is quite a hubbub happening. Quite a crackle in the air.

Queensland Opposition Leader Annastacia Palaszczuk begins with a talk about enduring Labor values. There is warm applause all around. Opportunity, fairness, respect and dignity for people at work. This is what Queensland Labor stands for, she says, a fair go, collective bargaining, regardless of background or circumstance. All should enjoy the quality they deserve in life. Equality of education, workplace safe and healthy. Restore these values in Government and we will do it come the next election.

Policy Coordination Committee chair Michael Clifford was next to second the motion on Labor values.

He said the platform needs to be concise. A document that party and non party members can view. It’s a work in progress. Values chapter, in this conference is crucial. Fair go is as synonymous with Labor as fairness of opportunity. November last year, the LNP made it harder for workers to organise. Consultation became no more than a briefing note from the employer. These developments are as bad as Work Choices. For example, cleaners can be contracted out at schools. This equals lower hourly rates for school cleaners. The lowest paid are attacked first.

School cleaner loses jobs, loses livelihood. Why appeal to self interest. ALP ‘gives a shit’ apt to make the effort to make a change in society. Policy must reflect our values. Alternative is less equality, less compassion, our belief lies in collectivism. ALP single biggest driver of equality.

Next up was one of the ALP’s truly great speakers, Deputy Opposition Leader Tanya Pliberesk. She thanked a warm Queensland welcome and traditional owners. She talks about how Opposition Leader Bill Shorten had a bad week but a  wonderful year. Better, though, than Abbott’s shortest political honeymoon.

Opposition is tough — being proved right about all the terrible things you said would happen.  Thanks to Annastacia for keeping the team together. Yvette can stand up. Took Redcliffe back.

Stand up Anthony Lynham – 19.1% swing. Anthony Lynham met a man who had never voted ALP in whole life until the Stafford election. We can thank Campbell Newman for that!

Tanya was getting warmed up. She reminded the crowd how Campbell Newman promised to act with ‘Humility Grace Dignity’.

It is his arrogance on top of all the cuts etc. There is a consistent pattern appearing with the LNP leaders:

She brought a tear to a few eyes with stories of hard working grandparents and parents, who were happy to pay taxes if it meant that children could get an education.

Finished with a zinger:

“Tony Abbott promised to create two million new jobs, I was hoping some of them would be in Australia."

[General hooting, whistling, and hollering all round]

"Keep your hands off our busses, and do not privitise them!"

City Cycles have cost us many millions of dollars.

After State MP Curtis Pitt promised that Queensland Labor would not sell any assets, the Conference moved on to amendments needing to be voted on. The main one being the proposed changes to the voting of a parliamentary leader.

Former Beattie Government Whip Terry Sullivan introduced and proclaimed that the 50/50 (that’s 50% voting coming from branch members and 50% from caucus) amendment was appropriate. 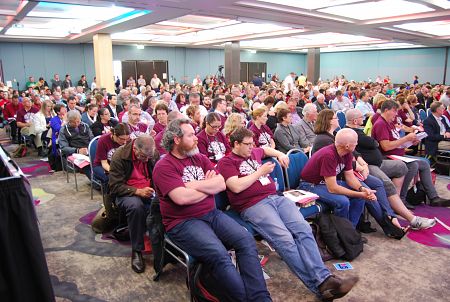 If unionists, Terry Sullivan volunteered, have a problem with this amendment then union members should join the ALP.

[Applause and booing (from the left). Vigorous stuff]

Former MP and Woodridge candidate Cameron Dick seconded the motion. Only through the reform can we deliver creation of a better society. That’s the genius of the ALP to change and reform. In 100 years, ALP is different to the one created under a tree. Queensland Labor Party should be at the vanguard of reform; Albo and Bill Shorten — great examples. Now is not the time to dilute vote of branch members.

Now for the speakers against the motion.

Nicole, a delegate from Griffith. The working group, from the 2013 state conference, stipulated how serious it was how leaders elected. Support of caucus, membership and union was needed. The parliamentary leader should never lose touch. Branch and union members must have a say. Union and branch members need to be together.

Then it's Bundamba MP  Jo Anne Miller’s turn and she’s against the amendment. She’s been a member 43 years and in the state caucus 15 years. Supports 30/30/30.

She starts with a jibe against Cameron Dick:

If we had a third unions we wouldn’t have privitised!

[Standing ovation from left “Order, order” from the chair, boos from the right] 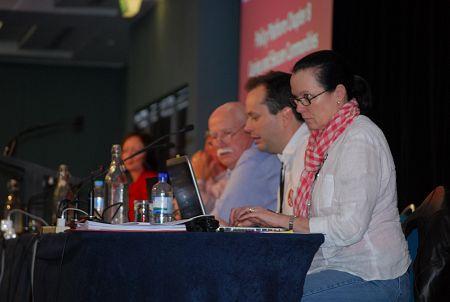 “I thought we got rid of verballing” added Dick Williams to laughter across the room.

Back to the supporters. Elliot from Labor Forum. Greater percentage of votes for branch members equals a greater say in the party. There needs to be a vision of a modern united Labor.

Forum wants membership in the party. Out in the branches, asking what they want. More power out of the backrooms – here is your chance left – if you don’t blame on you! Standing applause right boos left.

Owen Doogan, Secretary of the RTBU. He’s proud to be hear that votes are moving  away from the  parliamentary members and 33% should be enough for them. Not about reducing peoples say. All of a sudden, Forum has found new principles. Inconsistent.

Where would the party be if not for the Unions? The funds available, the people power. Queensland ALP is moving to the point that we can nearly win the next election.

2012 South Brisbane by-election victor Jackie Trad is up, calling out, about the right:

“Here comes the self interest!”

Here’s an historical account , there’s nothing we can’t achieve if we work together. Your Rights at Work, Redcliffe, Stafford. Every single improvement has been made when 30/30/30 worked together. Best leader is the one that has support that speaks to every constituent part of the party.  Ironic, she feels, that she is debating today with members that have argued for democratisation of party and now Forum who has been arguing against rank and file participation. Proud to make contribution as parliamentary member, branch member and member of the AMWU!

Now the voting takes place. Dick Williams declares that the amendment has lost.

[Boos from the right and cries of Shame!]

Dick Williams states the original resolution ought to be voted on... count?

Delegates from the right ask that a show of hands be counted. Procedure requires 2 people to count. The result …….. a resounding Yes!

[Cries of shame from the right]

I endeavoured to get reactions on the vote from both sides of the party.

From Labor Forum, a fellow gave me the opinion that the other states have the 50/50 approach. The 30/30/30 system is problematic as the unions have a lot of ways to influence the conference. He was also worried that the elected parliamentary leader may be labelled a union "stooge". He also felt it was difficult to say to other members that there influence in the party was effectively voted against.

A member of CFMEU told me that the 50/50 amendment was intended to shore up the influence of AWU, SDA, and TWU at the conference. The original resolution had taken branch members say from zero to 33%. The right had failed to back a similar resolution to that last year when it was a question of Senate representation.

Back to the remaining amendments to be voted on. They were still important, but much of the passion had dissipated as the numbers were clearly falling to one side.

Former MP and candidate for Sandgate, Stirling Hinchliffe, introduced a motion for amendments that he believed would give members greater say in the preselection process. It involved changes to the wording of items 33 and 61.

The vote on the amendment was lost.

Conference delegate Murray Watt introduced an amendment that would give the ex officio members of administrative committees need to have a vote. Debate ebbed and flowed on the topic of powersharing.

[Jibes crossed the floor of the auditorium]

The amendment was carried.

The involvement of the ALP members on Saturday was heartfelt and robust — but never, at any time, was there a suggestion that things would spill over and become uncivilised.

It was good to see democracy in action. 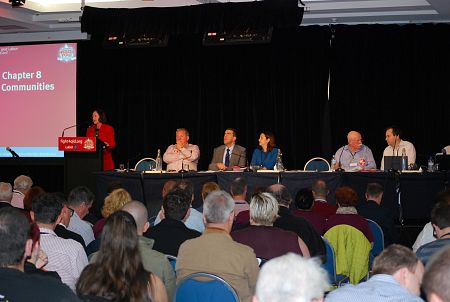 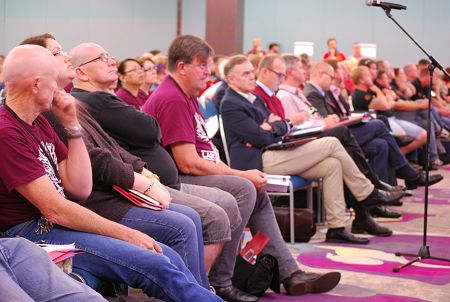 19 March 2015, 7:30am Evening vigils for the Bali Nine pair Andrew Chan and Myurun Sukumaran have been ...
Join the conversation
comments powered by Disqus
News updates