Prime Minister Scott Morrison's new slogan is hypocritically telling us that our planet's saviour from the climate crisis is the very thing destroying it, writes Dr William Briggs.

NOW THAT COP26 has come and gone, the world seems to be getting back to business. Our Prime Minister assures us that this “business” will be our saviour. All we have to do is to accept that capitalism is the cure and not the disease.

It’s no more difficult or tricky than accepting that night might actually be day, or black is white or war is peace. We are in safe hands. After all, the Australian pavilion at Glasgow was sponsored by Santos. What better advertisement for “can do capitalism”?

It might be considered churlish not to afford Santos the accolades they deserve but at its 2017 annual general meeting, then Santos chairman Peter Coates declared that preparing for 4°C of warming was “sensible”. The current Board might have recognised that such a temperature increase would cause the majority of life to become extinct and wipe out human civilisation in the most violent and traumatic event in our history, but its core business has not changed.

Santos and its publicists are caught in a paradox. The Board now preaches a zero-emissions future while pressing for the Narrabri gas project in the Pilliga region of northwest NSW. This project will see 850 coal seam gas wells sunk, making Narrabri one of the top 100 greenhouse gas emitters in the country. Some might call the stated claim to reduce emissions while increasing them “sleight of hand”. Others might use the term “greenwashing”.

According to an article in the Sydney Morning Herald:

‘Associate Professor Bryce Kelly, an environmental scientist from the University of New South Wales who is part of an international team currently conducting the world's largest study on methane emissions from coal seam gas, said that the documents supporting the project “work really hard” to make the greenhouse gas footprint look small.’

Capitalism is seeking to present itself as a saviour. Globally, investors want to be soothed by reports showing just how much things have changed and how ethical and greenly tinged capitalism has become. Santos is by no means the primary culprit. Just 100 global capitalist corporations account for 70% of total global carbon emissions. Twenty of these make up 35% of all emissions. Again, we see capitalism at its “can do” best.

There should, by now, be nobody on the planet who cannot see what the future will look like if dramatic measures are not undertaken. We need to remember who has created the mess that we find ourselves in. Climate change is a direct result of capitalism and yet capitalism is rarely held accountable. The people are made to feel personal guilt, rather than seeing themselves as victims of destructive processes.

Capitalism has brought the planet to the brink. It is not the people that are driven to return increasing profits, or who must outperform rivals, find bigger markets and newer ways of extracting resources. 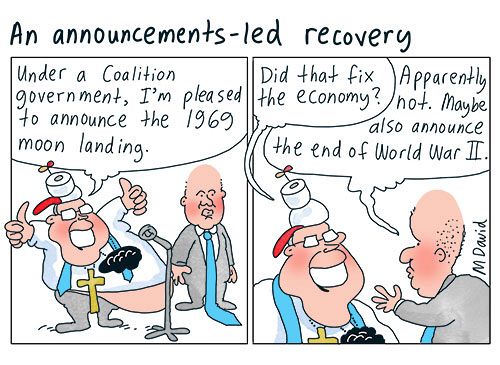 There is a growing chorus of voices that call for either “ethical” capitalism or “green” capitalism. It has a comforting ring to it. U.S. President Biden and UK Prime Minister Boris Johnson have been given credit for seeking to address the problem, but it is not simply a matter of arranging carbon credits or even limiting fossil fuels. Capitalism created the problem by its absolute need to expand, compete and devour opposition in the quest for profits. The environment is one major victim in this.

Climate activist Greta Thunberg, speaking outside the COP meeting in Glasgow, cut very much to the chase when she asked:

Are we fighting to save ourselves and the living planet? Or are we fighting to maintain business as usual? Our leaders say we can have both, but the harsh truth is that that is not possible in practice.

The people in power can continue to live in their bubble, filled with fantasies like eternal growth on a finite planet, and technological solutions that will suddenly appear, seemingly out of nowhere, and will erase all of these crises, just like that.

What Thunberg did not mention is that part of the “business as usual” view from our various leaders is the absurd vision of powerful states seeking to maintain power. This inevitably means the waste of trillions of dollars on the military and with it, phenomenal emissions, even in peacetime.

Interestingly, emissions from armies are not counted in official figures. The total emissions from the world’s military come to 6% of all carbon. The Pentagon, if it was a country, would be the 55th biggest emitter on Earth. The armies of the world exist to support states that in turn exist to support capitalism. How ethical or green this can be is hardly worth debating.

And so, we return to the reassuring idea that “can do” capitalism will find the answers to any problem that the world may have. Santos, in a global sense, is not a major player, but it remains a symbol. We save the planet by creating more emissions in order to reduce emissions. Night is day, black is white, war is peace.