AND THE HITS just keep coming for the Morrison regime. Every week it’s a new scandal.

This week we saw the ABC expose the misogynistic “boys’ club” culture of the Federal Coalition Government — especially the antics of senior ministers Alan Tudge and Christian Porter, who, it appears, have both had affairs with staff members and now have broken marriages. Porter, at the time of announcing his separation, loudly claimed no third parties were involved. It now seems unlikely that was the case.

Anyone familiar with the so-called Canberra bubble will know that these two cases are not the only ones. Many MPs (not just males) are well known for their affairs and extramarital relationships. Of course, it’s not limited to any one party but the issue does seem to be more common within the Coalition’s ranks. Why is this? The Coalition is dominated by men — only 23 of their 113 MPs and senators are women (Labor have 54 women in their cohort). With such an imbalance, the culture can easily become a boys’ club without the moderating effect of women in their ranks.

There is also the issue of the power imbalance between an employer and his or her employees. Especially within Parliament, most employees serve at the will of their employer. They have very few legal protections from exploitation as their employment can often be terminated without notice. It is a system that allows sexual predators to flourish and sees its victims tossed aside if they speak out or a new conquest is taken up. The issue of genuine consent is vexed.

Oddly enough, when allegations about Tudge and Porter first broke, former Deputy PM Barnaby Joyce called a presser to play down the affairs of his colleagues. Given his past, it was laughable. However, it turns out that Barnaby Joyce and Alan Tudge have much in common (apart from histories of marital infidelity). Joyce famously lost his seat when it was found that he was unwittingly a New Zealand citizen, by descent through his father. He was ruled ineligible under s44 of the Constitution that prohibits dual citizens from serving in parliament. He left parliament, renounced his Kiwi citizenship and recontested the by-election for his seat, which saw him return to parliament.

On Tudge’s citizenship declaration (downloadable from here), he states:

I believe Tudge has misinterpreted the Canadian Citizenship Act (my children’s Canadian passports are clear evidence of this).

The Canadian system had the obvious disadvantage that citizenship could be granted indefinitely to generation after generation of people born outside of Canada who effectively had no links to the country. Accordingly, on 17 April 2009, an amendment to the Citizenship Act was made limiting citizenship by descent to only first-generation descendants. It appears as though this is what Tudge is relying on (above). 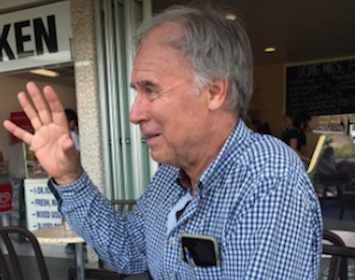 The s44 fiasco has highlighted the incompetence and lack of policy and action of the Turnbull Government — this is a crisis of neoliberalism.

However, when the law came into place, it only applied to those descendants born after 17 April 2009.

This is where Tudge has likely made an error. Given that Tudge has a Canadian grandparent, it would seem he has been a Canadian citizen since his birth in 1971. The amendment, therefore, does not affect him — he is almost certainly still a Canadian citizen and thus ineligible to sit in the Australian Parliament under s44 of the Commonwealth of Australia Constitution Act.

In a scenario, the new rules would apply like this: A child is born in Brazil in 2005 (before the new rules came into effect) to a Canadian citizen father, who himself is a born abroad citizen by descent and a Brazilian mother who is only a Permanent Resident of Canada. The child automatically becomes a Canadian citizen at birth. Another child born after 17 April 2009 in the same scenario would not be considered a Canadian citizen. The child is considered born past "first generation limitation" and the parents would have to sponsor the child to become a Permanent Resident. Once permanent residency is granted, a parent can apply for Canadian citizenship on behalf of the child under subsection 5(2) without the residency requirement.

The upshot of this is that Alan Tudge appears to be in breach of Section 44 of the Australian Constitution and should, therefore, resign. Otherwise, he should be referred to the High Court. A simple call to the Canadian High Commission in Canberra should confirm what has been written above.