Ag-gag laws forgotten as AJP joins forces with the Liberals

Peter Wicks looks at the unlikely alliance between the self described "party for animals" the Animal Justice Party and the live export and "ag-gag" supporting Liberal Party in the seat of La Trobe.

IF LABOR is to take government in a couple of weeks, it needs to win back some marginal seats and so far, things are looking pretty positive in that regard.

One thing on Bill Shorten's side is the fact that Labor is the only one of the main three parties to have not had their leader knifed in a hostile takeover in the last three years.

However there are local factors that are helping too. The campaigning methods, preference choices, and attitude towards their electorate often see candidates and members alike shooting themselves in both feet during one of the rare moments they aren’t wedged in their mouth.

La Trobe is one of these seats that Labor need to win if it is to form government and around four per cent is what sitting Liberal MP Jason Wood is clinging to like a koala clinging to a tree as loggers close in with a free pass from the Coalition Government.

Up until Tuesday, in the electorate of La Trobe, there had been three candidate’s forums where Jason has had the option of meeting those he hopes will vote for him. At each and every one he has failed/refused to attend. In fact about the only times he has fronted the community have been at staged events. Events such as Malcolm Turnbull with steam train Puffing Billy, and Julie Bishop the Foreign Minister from Western Australia who, at an opportune time, suddenly felt an affinity with a suburban Victorian branch of the CFA. Liberal Party members came out in droves for these events to show “community support” while the bulk of the community went to work to try to deal with the skyrocketing cost of living.

However, in a seat where preference flows are likely to decide the outcome Jason Wood had a trick up his sleeve. The usual parties of the One Nation ilk could always be relied upon for preferences but this time, Jason needed someone to shift some preferences over from the left.

You are probably thinking that no self-respecting left-leaning party would suggest voters put the Liberals at number two on their ticket. However, the Liberals managed to find one.

At a time when we have discovered Barnaby Joyce is content to see Australian cattle have their skulls smashed via repeated blows with a sledgehammer, one left-leaning party have carefully chosen their preferences in a marginal seat to try to ensure Joyce remains in charge of animal welfare in Australia. That party is the Animal Justice Party (AJP). 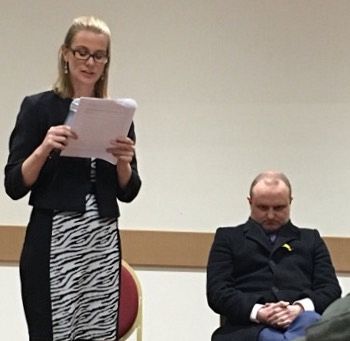 Leah Folloni with Jason Wood at a candidates' forum in the seat of La Trobe, Victoria

Some have taken this decision as a sign of the party turning its back on their membership, others say it is more like they have fled from their ideals screaming Screw you! and flipping them the bird as they go.

When the question of preferences was raised at the recent Tecoma community candidates' forum, the members of the public displayed their disgust at AJP candidate Leah Folloni who, in turn, tried to defend the Liberal MP who did not have the courtesy to show up.

Folloni, herself, had a chance to vent later on Facebook saying she had been screamed at by a 100 'meat-eating hills Greenies'.  As well as this, she also stated that Jason Wood had actually advised her not to attend.

Video of the event revealed that approximately 70 people attended the forum, none of them screamed at Folloni and, in fact, Folloni had tried to talk over the question before it had even been fully asked. I know this as I was the one who asked the question and had to request that she let me finish the question as she tried to drown out my voice with her own.

This week, Liberal MP Jason Wood fronted up to a forum at long last and when he was asked why he didn’t attend the previous one at Tecoma and advised the Animal Justice Party candidate not to attend, launched into an attack on organisers of the Tecoma forum and criticised all of those who are residents in the Hills area of the Dandenong Ranges. The mediator of the event then stopped anyone seeking to respond to Wood, saying they needed to show “respect” for the MP, who had just shovelled disrespect on most of the audience, the Tecoma forum organisers and large sections of the community.

The reason for the decision to preference the Liberal member is because he was one of those involved in the decision to make the announcement regarding a ban on the importation of cosmetic products tested on animals, that I wrote about recently. This announcement, made to seemingly secure preferences in a marginal seat, is, so far, just an announcement and photo opportunity — no policy exists as I write this.

This promise of a policy flies in the face of the Coalition's position as recently as February, ;when they voted down a bill from Labor MP Clare O’Neill, seeking exactly the same ban.

The Animal Justice Party, however, are confident that the party who have broken election promises on Australian school funding, health funding, tertiary education, funding to the national broadcaster, as well as countless other things, will honour their promise to protect animals in other countries.

However, it is not only the sudden policy about-face regarding cosmetic testing that smacks of hypocrisy.

By giving the Liberal Party their preferences in such a marginal seat, the Animal Justice Party are asking their supporters to vote for the party that knowingly sat by while knowing sledgehammers were being used to smash in the skulls of Australian cattle and their industry lobby counted its blood money.

The Animal Justice Party want you to vote for the party seeking to bring in "ag-gag" legislation. Ag-gag is legislation that would make the reporting of animal cruelty on commercial property such as farms and abattoirs, illegal. It also seeks to criminalise whistleblowing and either censor, or jail members of the media for reporting animal cruelty. Ironically, this legislation the AJP seemingly support, given their preference flows in La Trobe, would see AJP’s hierarchy jailed for most of their adverts and flyers.

Animal Justice Party candidate, Leah Folloni after being caught out lying online was forced into making an apology of sorts to the public in the local press. However, the AJP candidate now better known in the community as “Liar” Folloni, couldn’t resist having yet another shot at her local community for not supporting Liberal preferences. She explained to the local press:

“ ... it became apparent … these people had no care about the welfare of animals.”

While I don’t know everybody that was in attendance at the forum, I can certainly say that there were many there who clearly have an interest in animal welfare.

But other efforts are not good enough for Folloni who owns and runs a nursery, a nursery that is likely reliant on the community she keeps insulting for its business. Unfortunately, unless you support Felloni’s quest to see a Coalition Government returned to power and Barnaby Joyce in charge of animal welfare, you clearly don’t care about animal welfare in her mind. And based on their endorsement of Felloni and their preferences, the Animal Justice Party feel the same.

For what it’s worth, I care for animal welfare but don’t care much for lying phony animal welfare activists. I also care where my vote goes and I want my vote to count against cruelty.

That’s why I always put the Liberals last.

Unless sincere apologies are forthcoming, as of now I’ll be putting Animal Justice Party second last. This will ensure the animals come first ahead of dodgy preference deals and desperate Liberal tactics.

Unlike some, neither my integrity or vote are for sale.