The national broadcaster promotes the show as being “adventures in democracy”, but according to a new Independent Australia study (authored by managing editor David Donovan), if ABC’s popular Q&A programme set electoral boundaries, it would produce a gerrymander worse than Joh Bjelke-Petersen’s Queensland.

The study, which details every guest on the ABC's current affairs panel show hosted by Tony Jones, Q&A, since its inception in 2008, shows an overwhelming preponderance of guests from Sydney and a very low proportion from Western Australia, Queensland and regional centres. 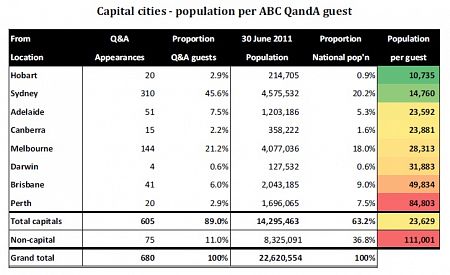 In addition to being focussed on NSW, where Q&A is usually produced, the study shows that the programme uses an extremely narrow range of talent. For instance, out of the 680 panellists appearing since the show began, only 345 different individuals have appeared — an average of almost two shows per guest. This average is bumped up because some guests have been on the program up to 13 times, including tonight’s guest Tanya Plibersek, despite only being a junior minister until December 2011. (Another guest appearing tonight, Malcolm Turnbull, will be making his twelfth appearance on the show. Note Figure 2.) 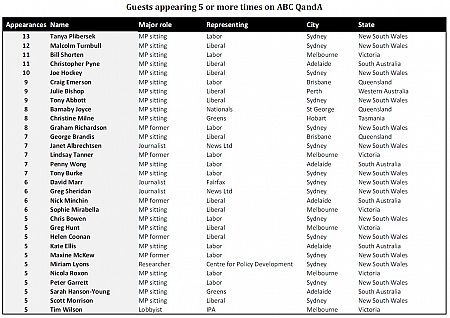 Independent Australia found that many prominent Australians, including Don Henry from the Australian Conservation Foundation and former Nobel Peace Prize nominee Dr Helen Caldicott, have never been asked to appear on Q&A.

“I’ve never been asked and would like to be,” Dr Caldicott told Independent Australia in an exclusive interview. “I find it somewhat stimulating, but a limited range of topics is discussed.”

The research shows that the show is relatively even-handed in presenting voices from the two major parties, but seldom includes panellists representing minor parties.

It appears that the producers have their favourites when it comes to “thinktanks”, with the free marketeering IPA topping the list with 4 different panellists and 11 appearances in total (not including appearances by former staff members).

“As the director of Australia’s largest progressive think tank I am sure the producers of Q&A will have me on one day,” said Dr Denniss in a statement provided to Independent Australia.

“Given the Institute’s research into the impact of the mining boom, climate change, tax reform, superannuation and the role of government in the 21st century, it’s hard to imagine they don’t think we’d have something to say about the big issues.”

The author of the study, Independent Australia managing editor David Donovan, says the ABC is letting down the public by its narrow focus and may indeed be in breach of its own Charter and Code of Practice.

“The ABC, by focussing on the same few people, mainly from the two major parties, is not presenting a full range of views,” said Mr Donovan.

“And by focusing on such a narrow range of people and views in such a popular and important current affairs show, Q&A is in danger of breaching its own Code of Practice and Charter,” he said.

“The ABC Code of Practice says it has a duty to provide balance, impartiality and a diversity of views, however based on the responses I have received from Q&A producers – which will be included in the final report – they appear to be more concerned about providing entertainment.”

“They seem to see Q&A as a sort of modern Australian Punch and Judy show.”

“Of course, entertainment is one of the objectives specified in the ABC Charter, but it is mentioned in that document after those of providing a sense of national identity and informing.”

“Also mentioned in that Charter is the need to reflect the cultural diversity of the Australian community, which appears doubtful in this program from its focus on voices from Sydney and Adelaide at the expense of voices from WA, Queensland and regional centres.”

“Far from being an exercise in democracy, Q&A operates more like an autocracy that showers patronage upon its favourites.”

The research and report is due to be published on the Independent Australia website later today.