WE USED TO BE FRIENDS!

HOW THE LIBERALS FELL OUT OF LOVE WITH KATHY JACKSON

Announced in a press conference this morning with Victorian Premier Denis Napthine, the taskforce between the AFP and Victoria Police serves the dual purposes of again kicking the union industry as well as attempting to win votes for Napthine’s Coalition Government.

Allegations about so-called union corruption are seen as a sure vote winner in Liberal circles because of the union movement’s close links to the ALP. With the Liberals trailing Daniel Andrews’ ALP 44-56 (two party preferred) and the election set for November 29, Napthine will be hoping the taskforce uncovers some serious dirt — and fast.

Of course, it is interesting that this new dirtdigging unit is only interested in looking into the construction industry union, the CFMEU.

AFP and Victoria Police taskforce to crack down on union corruption in construction industry http://t.co/UrSlSp1cMT pic.twitter.com/2T0K9WJ8C8

It wasn’t so long ago, during the term of the previous government, that the Health Services Union was portrayed as being the worst of the worst by Abbott and co — yet it seems to have been deliberately excluded from this latest witch hunt.

Could this have anything to do with the fall from grace of brave Joan of Arc-like whistleblower Kathy Jackson — a name that formerly could not be said enough times for the Coalition’s liking; a name that, in Coalition ranks, once seemed to be synonymous with everything the Liberal Party claimed to stand for?

This, of course, was back in the days when the HSU saga was working in the Liberal Party’s favour and they felt comfortable hitching the Coalitions credibility to Kathy Jackson’s integrity — blithely ignoring the mountain of allegations against her, even then.

Back then, current Employment Minister Eric Abetz couldn’t find enough glowing words to say about her — in fact every time he spoke of her it looked like his head was going to explode with pride and he even had her name on his telephone’s speed dial.

George Brandis too, as Attorney-General and as Shadow AG has spoken about Jackson with admiration and a glint in his eye many a time.

Of course, Education Minister Christopher Pyne and Prime Minister Tony Abbott have both piled praise on Jackson, with Pyne arranging a parliamentary apology to her over a Craig Thomson speech to Parliament, while Abbott referred to her as “heroic” and brave, amongst other many glowing accolades while he was opposition leader.

Jackson was lauded by the shock-jocks, hailed a hero by right-wing commentators and was even the guest of honour at an event at the home of union hatred, the HR Nicholls Society, which she happily attended as the guest of the lovable architect of WorkChoices, Peter Reith.

Yes, not so long ago, in the eyes of the Coalition and its many one-eyed camp followers, while she was piling allegation after allegation on Craig Thomson and running down the Labor Party, Jackson could do no wrong.

Let's not forget, Kathy Jackson is "credible" and a "hero" according to Tony Abbott (10 April 2012): pic.twitter.com/mpZJKDHnNL

Moreover, back then Jackson was engaged to be married into a clan considered Liberal Party royalty — the mighty Lawler family. Her fiancé Michael Lawler was the Tony Abbott appointed Vice President of Fair Work Australia, his brother John Lawler was then CEO of the Australian Crime Commission and their father Sir Peter Lawler — a senior staffer to PM Robert Menzies and Australia’s first Ambassador to the Holy See (The Vatican). Like the Abbotts, the Lawlers are said by some to have strong ties to the shadowy arch-conservative Catholic sect Opus Dei, as well as the Liberal Party.

But now, sadly for Jackson, things appear to have changed. The Coalition have seemingly turned on Kathy quicker than you can say “James Ashby”.

In Question Time on the 28 October, Christopher Pyne was attempting to besmirch Bill Shorten and Victorian Opposition Leader Daniel Andrews by linking the Victorian ALP to the CFMEU, when Labor MP Rob Mitchell made a comment about the Liberal’s friendship with Kathy Jackson, at which point the Speaker Bronwyn Bishop intervened.

Mr Albanese: Madam Speaker, on a point of order: in what way is the name 'Kathy Jackson' unparliamentary?

The SPEAKER: Because it was reflecting on another member. I said: whoever made the comment will withdraw the comment.

I spoke to Rob Mitchell about this comment as well as its context.

Christopher Pyne had been trying to portray the Labor Party as corruptly linked to the CFMEU, so Rob retorted with:

Speaker Bronwyn Bishop was having none of it.

Apparently, the same Party that could not align themselves with Jackson enough now think it is a huge insult to be linked with her.

In Victoria, as part of their campaign, the Liberal Party have launched a new website called:

‘Which Dodgy Character Will Turn Up At Labor’s Launch’.

It features a number of people the Victorian Liberal Party apparently view as dodgy. 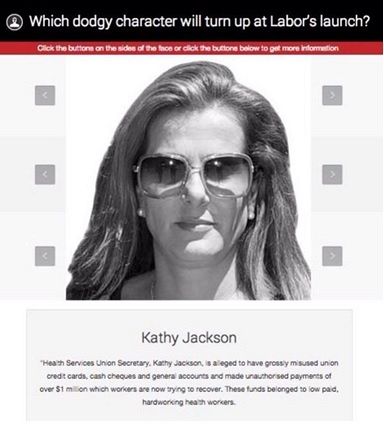 One of those on the Coalition’s “dodgy” list is none other than their former Joan of Arc hero — Kathy Jackson.

‘Health Services Union Secretary, Kathy Jackson, is alleged to have grossly misused union credit cards, cash cheques and general accounts and made unauthorised payments of over $1 million which workers are now trying to recover. These funds belonged to low paid, hardworking health workers.’

So, since the mainstream media started seeing Jackson’s true colours, the Liberal Party have tried to distance themselves from her — first by ignoring anything to do with her, then making mention of her name “unparliamentary”, and then in Victoria even labelling her “dodgy”, seemingly accusing her of being a crook.

However, despite it being suddenly open season on Jackson, the man supporting and advising her ‒ someone allegedly heavily involved in the Jacksonville saga ‒ has so far been given a free pass while the taxpayer continues to pay his hefty wages.

Last year, as most would be aware, Tony Abbott reintroduced knighthoods to Australia.

One of the last people to receive a knighthood before they were abolished was Sir Peter Lawler, who is said to be a close friend of Tony Abbott’s father. I wonder if this had any bearing on Abbott’s decision.

Sir Peter is also a founder of the Australian Family Association, a far right-wing Christian lobby group and, in 1986, was given the papal honour of Knight Grand Cross of the Order of Pius IX, a papal knighthood.

Currently, Sir Peter Lawler’s prospective future daughter-in-law Kathy is in a psychiatric hospital and, when she emerges, will face Federal Court for around $1.4 million in member’s funds she is alleged to have misappropriated, and will then likely face criminal charges.

I wonder if she’ll refer to Sir Peter and Lady Mary as Mum and Dad.

Nah. No investigation Kathy Jackson.@lieslord Abbott ruling 'a hero who should be taken very seriously'.#auspol http://t.co/jsIfUsjnI2