When Opposition Leader Bill Shorten likened the Coalition Government to "Tea Party Republicans" in his May Budget Reply, he neatly encapsulated the Abbott machine.

Because Prime Minister Tony Abbott has foisted something alien and foreign onto the Australian people — an American style lunar far right party, actively working to undermine the Australian way of life, to create greater inequality and an impoverished underclass.

In America, the Tea Party movement was the inevitable consequence of 30 years of politics moving gradually to the right.

The move came in increments.

It started with Ronald Reagan, who nurtured and encouraged the religious right; continued to a degree with Bill Clinton, whose domestic policies like deregulating the media were quite right of centre, and resulted in Fox News and people like Rush Limbaugh; and was completed by George W Bush, whose Presidency gifted us The War on Terror and the second Iraq War.

The election of Barack Obama was the tipping point for the far right in the USA. They could not countenance the election of even a half-white African American and the Tea Party was born, funded by the shady fossil fuel billionaire climate denial funding Koch brothers.

We have had no such incremental evolution in Australia.

The far right in the form of Abbott’s Government came with few warnings, now leaving people are in shock, reeling at the assault on the Australian way of life its Budget and policies represent.

Abbott lied to get elected, of course, because if he had told the truth he would have been unelectable — Australians would have run a mile.

Aided and abetted by the right wing media, largely News Ltd and the shock jocks, this extreme rightwing Government has been foisted upon us.

Sure Australia has a few billionaires who have an interest in maintaining inequality for their own economic purposes, for cheap labour, like Gina Rinehart, and sure there is a certain percentage of fundamentalist Christians in our population, but it is a small percentage — not like in the USA where virtually the entire South-East and much of the Mid-West is the Bible Belt.

We have always enshrined the "fair go" as part of our social and political aspirations and we are, by and large, a secular lot. Only about 13 per cent of us go to church regularly for example and at the last census 22 per cent declared "no religion".

We are not naturally a far right country and so having a Government of this persuasion does not sit comfortably with the vast majority of Australians — even the apathetic, non-politically engaged ones, who care more about sport than politics.

In other words, the Abbott Government is, in many ways, to borrow from former conservative PM John Howard, essentially un-Australian. That is why people are angry and demonstrating in the streets in ways we haven’t seen since the first Iraq war.

So what is Australia's natural political spectrum?

Here is my theory.

I believe it can be found if you sit the Australian Labor Party and the Greens next to each other. The LNP has become so extreme it can no longer be considered representative of any more than, I would guess, around five per cent of our population.

Tony Abbott Just a feral In a monkey suit pic.twitter.com/XWjGhkGi0x

The dominant right of the ALP is fundamentally conservative and, in my estimation, about as far right as most Australians want to go. Its members are conservative economically, and also in the realms of health, education, and social welfare and social justice.

The Liberal Party no longer has a left flank or “wets” — or if it does they are completely gagged by the newly emerged far right, who have been given free reign under Abbott. Such as Cory Bernardi, who thinks gay marriage will lead to bestiality and who has had many study trips to the USA to meet Tea Party types; and libertarian activists the Institute of Public Affairs, with its links to shadowy U.S. think tanks and which has also had a huge influence on Abbott’s Coalition.

The politics of most Australians, in my view, would sit on the right and centre of the ALP, you would have a sizeable percentage, say about 25-30 per cent on the left, and then about 10-15 per cent would be ideologically comfortable with the Greens.

That is our true political spectrum because the ALP right is, in truth, right of centre. As a Party, Labor still sits slightly left of centre, but taken on its own the right faction is really quite conservative and, as shown by the election of the Right's Bill Shorten against the vote of the membership, dominant in terms policy formulation and party direction.

Former Labor Foreign Minister Bob Carr was on ABC Lateline last Thursday talking about it being a good idea for Labor to consider copying the Abbott Government’s boat turn back policy.

I couldn’t believe it when I heard it, but then I remembered Bob Carr is a member of the ALP Right. Interestingly, Bob Carr even attempted to enlist Tony Abbott for the ALP in 1970s.

There is an active group from the Labor Left, Labor For Refugees, that want to soften and humanise the ALP's harsh refugee policy and make it more compassionate. The Greens, of course, already have a very compassionate asylum seeker policy.

See what I mean by encompassing the spectrum of political views in Australian society? Australia's natural political spectrum is comfortably covered by the ALP and Greens.

We are not a radical rightwing country, nor have we have ever been in our entire history; the likes of Sir Robert Menzies would be turning over in his grave at the antics of Abbott and his extremist rightwing Government.

Abbott and his cohort makes even John Howard look left of centre.

And that could well be why, at the next Federal election, whenever that may be, we may see something new in Australian politics — a massive ALP landslide or, possibly, the emergence of our first formal ALP-Greens Coalition Government.

That is if Tony Abbott’s lunar rightwing Government lasts.

With the challenges of ALP, Greens and PUP in the Senate, as well as various other cross bench senators, who knows what may happen next. 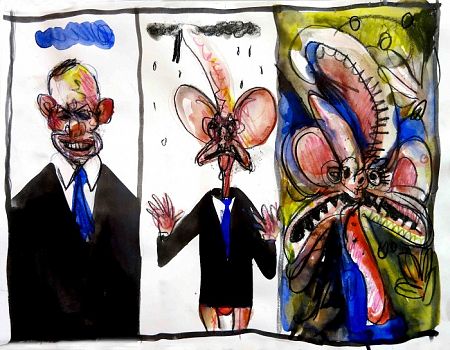 Independent media: Our democracy depends on it