Australia is being exposed for its human rights failures worldwide — including in Russia, South Africa, Indonesia and China. Alan Austin reports from Europe.

DISMAY AT Australia’s cruelty and hypocrisy is now worldwide.

‘Indonesia and Malaysia have both offered one year of temporary settlement for the thousands of Rohingya whose boats have washed up on the coast of the two countries. Neither are signatories to the UN convention.’

An academic interviewed by Malaysia’s Utusan described Australia as "cruel".

The journal noted that Australia is

‘... the government is not only violating human rights’ but is ‘denying Australians and the international community the right to know what it is doing.’

Russia’s Unification journal highlighted the cruelty towards children in detention:

‘Australian authorities are accused of deprivation of liberty of children ... This is a violation of Australia's international obligations under the Convention against Torture and Other Cruel, Inhuman or Degrading Treatment or Punishment.’

‘Australia and its prime minister Tony Abbott bear great blame, because they initiated this potentially fatal policy of returning boat people to the open sea in this region.’

‘What is most cringeworthy about the Australian “solution” to boat asylum seekers is that it is now regarded as best practice.’

Australia recommends its own ghastly 'solution' to Europe - http://t.co/eGkuQqYmyl #GoogleAlerts

The journal said Australia’s refugee intake was ‘a mere drop’:

‘Australia could comfortably treble that annual intake, with great advantages to the economy and its nation-building – quite apart from the need to do something about restoring its humanity.’

‘... stranded at sea in Southeast Asia, which is facing a crisis of thousands of refugees.'

It noted, however, that

‘The United States offered to help Indonesia and Malaysia to bear the burden.'

‘The Abbott government’s strategy is to treat asylum-seekers who arrive by boat so terribly that they simply give up. Unconstrained by a bill of rights, Canberra has implemented a suite of harsh policies to this end.’

Australia made it into the @nytimes unfortunately for the wrong reasons Australia’s Rigid Immigration Barrier http://t.co/078N5eO5n0

Some Italian journals approved of Abbott’s cruelty. An opinion piece in L’Ultimari Battuta claimed that for Europe’s refugee problem, ‘the solution seems to come from Australia’. The piece quoted Abbott’s mantra ‘If you do not stop these boats you cannot stop the deaths at sea’. It concluded: ‘We hope this message reaches Italy and Brussels.’

The message has indeed reached all Europe. And was emphatically rejected.

‘I'm a sailor who spent twenty years at sea. I intervene to help people. A ship in distress, whether it is a boat full of immigrants or a merchant ship, should be assisted.’

Le Monde in France asked the question: ‘Australia avoids asylum seeker drownings, but at what cost?’

‘Canberra boasts that no migrant has died at sea in 2014 and 2015, attributing this change to the migratory tightening by Tony Abbott’s conservative government.’

The author is sceptical:

‘But what happens exactly in these waters is difficult to verify... If no boat has landed, this does not mean that no-one has tried.’

‘Australia, which paradoxically is exclusively populated by immigrants apart from their own indigenous Aborigines, is notorious for its uncompromising policies towards boat people.’

On other topics, The Washington Post ran a story on Thursday on the reversal of the migration trend from New Zealand to Australia. It linked this with ‘Australia’s economy stumbling and New Zealand’s improving’.

The Wall Street Journal headed a report on Wednesday about another of Australia’s fractious regional relationships, ‘Australia Risks Snubbing China Over Military Drill’.

‘Australia hasn’t yet invited China to a major military exercise in the Pacific involving both Japan and the U.S. for the first time, risking a backlash from Beijing amid escalating territorial tensions in the South China Sea.’

‘Australia's prime minister skols a beer, dribbles some on his shirt’ appeared prominently in Germany’s Bild. 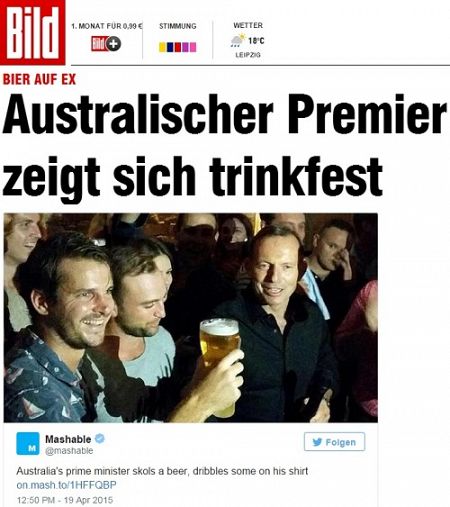 The illustrated report noted: ‘When the video went online, ridicule and criticism were not long in coming.’ It quoted comments condemning the PM, including for the hypocrisy of having recently spoken out against binge drinking.

The Washington Post last week ridiculed Australia with the story ‘Pup-roar: Johnny Depp’s dogs escape Australian death threat’. As did countless other journals and radio and TV outlets across the world.

Unlike Oliver’s first hilarious humiliation of Australia, this one does not focus solely on Tony Abbott’s boorishness. It starts with Joyce but then expands to "Aussies".

It included the satirical – but perhaps appropriate, given all the above – warning:

"Clock’s ticking, Aussies. So hurry up. Because time is running out!"

For stories you don't find in mainstream media, subscribe to IA for just $5.