PM Tony Abbott is touring the world; meanwhile, Australians cringe, mortified, wondering what international ignominy he will bring upon their nation next. Alan Austin reports from France.

WITH PM TONY ABBOTT on a tour of Indonesia, Europe, Canada and the United States, the embarrassments for both him and Australia are mounting.

Few newsrooms here in France bothered to mention Abbott’s visit yesterday to commemorate the D-Day landing 70 years ago with other heads of state.

One journal which did, Le Point, wrote scathingly of Abbott’s offensive D-Day speech, which allocated just 30 seconds to the historic military event. Then – enchaîne directement sur les intérêts économiques – linked this directly to his economic self-interest.

Obama used the occasion to call the world to resist “temptation to pursue narrow self-interest” but instead seek “common endeavour”.

Had Obama’s advisers alerted him to Abbott’s lame lecture? Probably.

Abbott’s ignorance and crassness caused dismay among U.S. and other foreign affairs observers well before he became prime minister in September.

They continued on his first day in office, when he cancelled the sound appointment of former Victorian premier Steve Bracks as Australia’s next consul-general in New York.

They have accelerated since. Virtually without a break.

His foray into international economic affairs at Davos, Switzerland, in January was mortifyingly embarrassing.

Since then, virtually all references to Abbott here in Europe have been negative, often describing him as le moine fou (the mad monk) or le roi de la gaffe (king of the blunder).

Le Figaro reported Abbott’s disastrous attempt to sell the May budget, including the notorious clumsy wink – clin d'oeil maladroit – to Jon Faine on ABC Radio. It added that Abbott is réputé pour ses gaffes (famous for his blunders).

Abbott’s brief and – so far – relatively gaffe-free visit to France on Thursday and Friday followed another dismal failure with Indonesia on Wednesday.

The latest stage in this sorry saga began with Abbott’s last minute cancellation of a scheduled May meeting in Bali with President Bambang Yudhoyono.

The fake reason for the no-show was that Abbott was working on the budget. As if.

The real reason was to avoid a humiliating dressing down over yet another boat tow-back the Indonesians had intercepted.

In a phonecall late in May, Yudhoyono issued Abbott’s instructions:

“It would be very good if we can meet in June.”

That phonecall was listened to by a number of Indonesians in the presidential suite who no doubt enjoyed hearing the inept Australian PM squirm. The exchange was recorded by journalists present and a transcript placed on an Indonesian website.

And so on Wednesday Abbott arrived on remote Batam Island, where the president was attending a Qur’an recitation contest.

If Abbott’s entourage had hoped this would be the occasion to sign the anticipated code of conduct on spying operations and normalise military, intelligence, trade and immigration relations, they were to be disappointed yet again.

It turned out to be just another meeting where the Australian leader mouthed more grovelling apologies for his government’s serial ineptitude and promised to be better in the future.

Or, to use Abbott’s words:

“... pay my respects and build on the relationship."

All this – in Indonesia and now in France – took place during the week Abbott’s international humiliation reached heights seldom scaled by any national leader anywhere, with the possible exception of Libya’s Muammar Gaddafi.

A satirical news report aired first in the US last Sunday night soon went viral on the internet:

His segment on “hard line, right wing Tony Abbott” is a devastating slam. But it’s virtually all Abbott’s own work. Plus – unless you are a rusted on Abbott fan – it’s hilarious.

That was twenty serious disasters then. There have been many more since.

And Abbott is yet to arrive in the US where he has already given offence on previous visits.

The one winner in all this, of course, is Steve Bracks. He doesn’t face the indignity of having to try to explain or excuse Tony Abbott and his hapless regime to the bemused Americans. 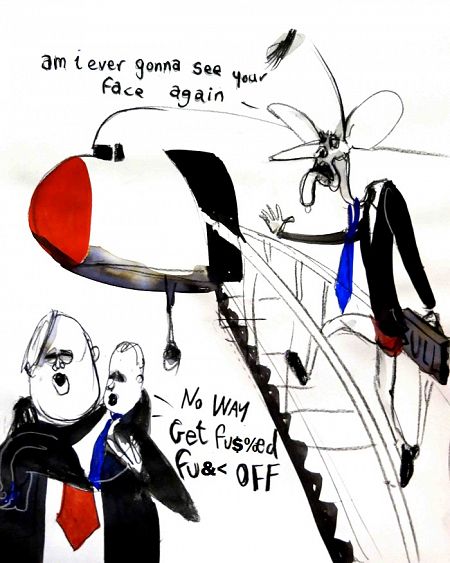 A selection of John Graham originals – including the (uncensored version) of the picture above – may be purchased from IA's online store. (See more of John's political art on his Cartoons and Caricatures Facebook page.)