Abbott and Morrison after Leo

Bob Ellis looks at a calamitous weekend of death, disaster and disarray at the hands of the Abbott Government.

YOU DON'T HAVE TO BE a trained logician to connect Scott Morrison to the death by self-immolation of Leo Seemanpillai.

He was a twenty-nine-year-old Tamil who, after spending 18 months in visa limbo, was desperately afraid he would die under torture if sent back, by Immigration Minister Scott Morrison to Sri Lanka.

He asked that his organs be donated — and they were.

S&M has expressed his regrets, and this morning said the asylum seeker had received support for mental distress, but he did not also confess that he, like a cyber bully, was the probable or contributing cause of this tragic suicide, and I ask my friend Kamahl, a Tamil who was for a long time here illegally, to add his regrets as well, and say a little of what it’s like to be afraid of being sent back, away from Australia, into an uncertain future.

We have seen over this weekend the true vile face of the Liberals, a glimpse from which it is likely they will not recover.

Social Services Minister Kevin Andrews said kids with a drug record would be denied the dole.

Education Minister Christopher Pyne said allowing universities to charge, with no limits, any price they liked for degrees would mean that the price would – by Alice in Wonderland economics – go down.

Prime Minister Tony Abbott said he had ‘no plans’ to deny to drug users any fraction of the dole, although though he had already decreed that every other six months they would not get the dole at all. He added that Malcolm Turnbull, having lately eaten Peking Duck with Clive Palmer, was not after his job. To cap it all off, he then tried to piggyback on D-Day celebrations to sell his corporatist anti-carbon tax message.

This dread mixture of confusion, mendacity, cruelty and crass opportunism underline the suicide of a young man who must now be called, must he not, a ‘genuine refugee’, who will hang henceforth round Morrison’s neck like an albatross.

It is to be hoped that a Daniel Andrews government will, on gaining office, arrest him for cyber bullying if he has not by then been extradited to PNG on the orders of the Governor-General to face questions over his actions before and after Reza Barati’s death, and why he allowed violent men to continue to bully those prisoners they had not killed or attempted to kill.

Is this an Australia you recognise? Just asking.

What will happen now is the suppression of polls that show Labor ahead by 16 or 20 per cent two-party preferred, and Shorten ahead by 20 or 22 per cent, until Abbott is safely in France inspecting war graves and announcing big sums of money, in tens of millions, to upgrade them. There will then appear a cobbled-up Newspoll, enthusiastically embraced by Fran Kelly, showing Abbott neck and neck with Shorten and his Government on 47 2PP.

This is what happens in a guided democracy — one monitored by Murdoch, the sleepless architect of our minds.

We are in uncharted waters here.

Deaths are occurring and a seemingly mentally unstable minister is covering up murders and attempted murders on his watch, refusing still to release the names of suspects, as has never happened for this length of time before. It is as if the name Lee Harvey Oswald were not known for six months after John Kennedy’s murder.

It is as weird as that.

Abbott should have stood him down, as he did Arthur Sinodinos, five months ago, pending investigation into his part in forty attempted murders. But it was not to be, and Leo Seemanpillai now has died also.

Abbott regards Morrison as his most successful Minister. And so it goes.

The levels of madness displayed by Pyne, Andrews, Hockey and Morrison are unprecedented in our politics, and make Abbott seem lately a fair bit more sensible than they every time he stomps on their sadist idiocies.

But Abbott is not that well in his mind either.

He keeps saying money for education is going up, although it has been announced in his Budget papers it will go down, by thirty or forty billion dollars and the states will have to go busk for it. He keeps saying Turnbull does not want his job, though Turnbull had it once and clearly wants it back. And he keeps imagining he can persuade Clive Palmer to let through a Budget that not only he, but all Australians, despise, abhor and curse openly.

We were friends once – or affectionate acquaintances – and that is gone. 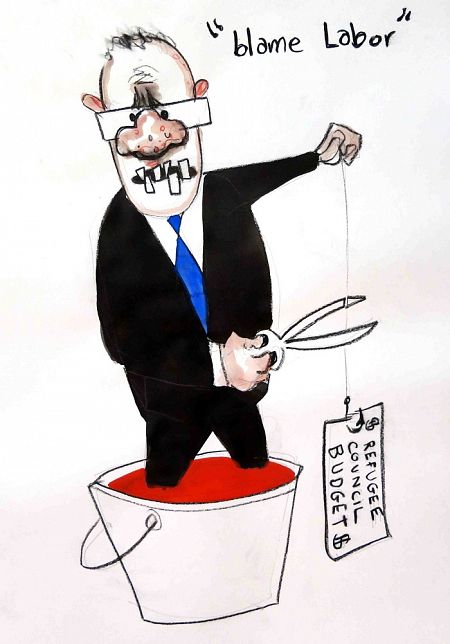