Signs of a twilight war between Hockey/Cormann and Abbott/Credlin grow by the hour, as Liberal MPs ready for revolt over the unaffordable PPL and the new deceit tax.

Pensions at seventy (Hockey) have tanked after private polling, but so have the billionaires’ baby bonus (Abbott), and the Great Big New Tax (Hockey) is now the go — thus proving you can tax your way to prosperity and it well may be that Abbott no longer has any power over policy, any more.

It’s likely, too, that both camps will be dangerously stained by the onrolling “culture of criminality” ICAC show that, in the next month, will start a good few bribesters grassing and more Liberal MPs resigning their party membership. It’s pretty certain Abbott has had a meal or two with Di Girolamo (he’s had a meal or two with me) and pretty likely he’s received, in the past, good money from that thug’s poisoned water hole for one or more of his campaigns, and so ‒ perhaps ‒ has Hockey.

Never before has a government eight months in power had so little authority.

Never before has a prime minister looked such a dumb-bum.

No Newspoll, though one is due, came out yesterday. This indicates a precipitous fall in the Lib/Nat vote two-party-preferred in an honest count that has been suppressed and a big surge to Palmer, who now controls eleven seats in various assemblies and will control the Federation, pretty much, on July 1. It’s certain his power will grow and Abbott’s shrink in the next week, and the next month, and the notion that Abbott has power ‒ power over anything ‒ will be out of date by June.

By then, Scott Morrison will be in the searchlights of the Senate and the Governor-General and may be on a slow march to prison for harbouring two murderers and covering up thirty or forty atrocities that it was his duty to reveal to the voters, not to mention his new his “Cambodian solution”. By then, it may well become evident that Abbott has drop-kicked to corporate mates not just the universities’ money but the decade-long search for MH370 in the wrong part of the ocean at a cost, over time, of hundreds of millions of dollars that could have been better spent elsewhere.

In the Caribbean, in South America, in some former African colonies there have been governments as hated and mendacious as this one. But never here.

It’s likely now that, not just Shorten, but Palmer, and Plibersek, and Albanese, and Hockey, and Turnbull, would beat Abbott in a face-to-face poll as preferred prime minister. It’s likely the Liberals’ ‘core’ vote, never more than 32 percent, is down now to 25 or 26, and the party, long-term, is crashing and burning like the Democrats after Meg Lees signed on to the GST.

It’s hard to imagine a worse lead-up to a Budget in peacetime.

AWH receipt for $2650 for "Dinner with Tony Abbott" emerges at #ICAC. http://t.co/lW3wmiF438 Abbott had denied ever meeting di Giranomo. 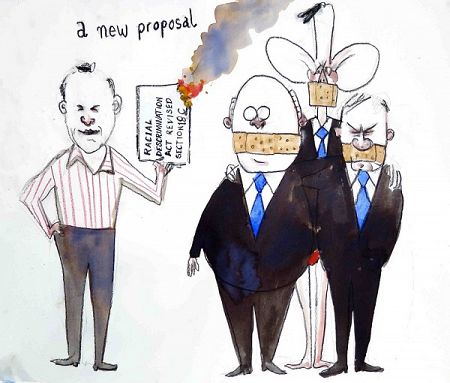