A fork in the line: which way to Brisbane?

Two rail projects connecting Melbourne and Brisbane are planned or under consideration but we will be lucky to get one of them funded and completed — even without competition from the other, writes freelance journalist Max Berry. 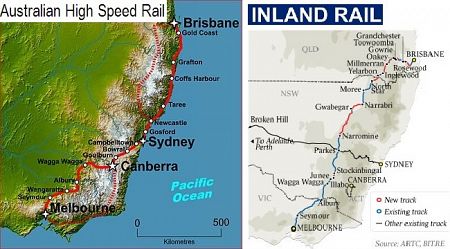 IT'S A COMMON PRACTICE among conference organisers to invite both a government minister and his/her opposition shadow to speak, so the audience can compare offerings from their politicians on a matter close to their hearts, or at least their careers.

So it was that AusRail 2014, the annual gathering of the Australasian Railways Association, held last week in Perth, heard from Deputy Prime Minister and Minister for Transport Warren Truss and, the next day, from Shadow (and former) Transport Minister Anthony Albanese.

Although both expressed support for Inland Rail, as the planned line connecting the Victorian and Queensland capitals via central NSW is known, the $300 million funding promised by the Federal Government so far will be sufficient only to complete engineering studies and turn the first sod (if that), leaving about $4.4 billion (in 2010 dollars) to be found from state governments and the private sector. Yet Truss told the conference the Government was committed to starting the project in its first term, (a softening of the more definite line a month earlier from an Australian Rail Track Corporation spokesman for the project that construction would start in 2015) and said the “game changer” project had “languished under Labor”.

Inland Rail follows a 1730-kilometre route that cleverly joins 700 kms of existing usable lines and 400 kms of lines needing upgrading, leaving only 600 kms (34 per cent) of new track to be built. Serious engineering challenges will need to be resolved in the Queensland section, where tunnels accommodating trains of 3,600 metres carrying double-stacked containers will be necessary (the Victorian leg is the existing Melbourne-Sydney corridor, diverging at Junee in NSW). The project is all about freight, connecting the Ports of Melbourne and Brisbane, with decentralisation benefits for inland cities on the route like Parkes. It will be a clear help in lifting the amount of freight moved by rail between the two capitals from the current estimated 30 per cent.  It’s also designed to deliver staged benefits so we don’t have to wait the entire 10-year construction phase to see fewer trucks on interstate highways.

Despite the Abbott government’s paltry financial commitment to the project, it has clear political capital invested in Inland Rail, with an implementation group headed by former Deputy Prime Minister John Anderson and a website complete with a video (and boppy tune) showing the route.

But most of the promised $300 million for Inland Rail is yet to eventuate, with Senate Estimates hearings revealing that the Government plans to spend only $11.3 million in 2014-15 and the Budget revealing it spent only $1.34 million in 2013-14. With the route announced, land will have to be acquired soon.

While both Truss and Albanese endorse Inland Rail but accuse each other of having stalled the project, the political divisions on the passenger-oriented High Speed Rail (HSR), allowing a two-and-a-half trip from Brisbane to Sydney, are sharper. Truss told AusRail the $114 billion cost (in 2012 dollars) of a HSR line on the existing corridor between Melbourne, Sydney and Brisbane was “double the size of the government’s entire $50 billion-plus infrastructure package, which is already record investment” and “we know from the feasibility study undertaken by our predecessors that a return on investment is not likely – ever”. That’s if the investment is ever made because “there is a dearth of people wanting to put their hands in their pockets”.

From the safety of Opposition, Anthony Albanese’s upbeat tone on HSR could not present a starker contrast. He reminded railwaymen and women (some of whom first talked about HSR 30 years ago) that Labor established the HSR advisory group and

“I’m disappointed that under the current government, work towards this project has ground to a halt,” Albanese said.

“I agree with John F Kennedy who once said, ‘Things do not happen; they are made to happen’. When it comes to High Speed Rail, all of the preliminary work has been done. It is time to make it happen.”

Did anyone see the ABC’s “nation building” satire Utopia, in which projects were announced – usually in stages – but never delivered?

Max Berry is a freelance journalist specialising in logistics.