As Australia’s first ministers consider far-reaching reforms to our Federation, one little-known proposal for rectifying our expensive, dangerous and environmentally damaging dependence on trucks to move most of our freight deserves serious consideration, writes Max Berry.

WHEN South Australian Premier Jay Weatherill aired his proposal to tax heavy road vehicles based on their weight, distance travelled and route location – known as mass-distance-location (MDL) road pricing – at the National Press Club in July, the idea got little attention outside his home state. At the time, the media were more interested in his proposals for education funding reform, and when the leaders’ retreat came into view, NSW premier Mike Baird’s push to raise the GST was the headline-grabber.

Yet MDL road pricing, if crafted well, has the potential to shift more freight back on to railways for long hauls and end the long dominance of road transport – and corresponding decline of regional railways – that began about 30 years ago. It might succeed where other so-called “mode-shift” policies have largely failed.

Under Weatherill’s mass-distance-location road pricing proposal, state-based registration charges and Federal fuel excise would be abolished, and replaced with a single charge that more accurately reflects the impact of heavy vehicles on the roads upon which they travel. Currently, a truck operator pays the same registration for a truck whether it travels 10,000 km a year or 100,000. By removing the fixed component of road charges, the tax payable is completely variable, making a very long haul more expensive – but, below a certain threshold, the tax paid on a short trip would be lower. That short haul that would become cheaper might be the journey from a farm to the local intermodal terminal or grain receival site, where a train would take it for the major part of the journey.

So, MDL pricing works at both ends of the haul-distance range to more efficiently use our transport infrastructure — making short truck trips (where there’s usually no rail alternative anyway) cheaper and long truck hauls costlier. The addition of components to match the charge to the truck’s laden weight and route location into the equation refines the concept further. Distance-based road pricing is a major reason why the United States moves so much more of its freight by rail than we do.

The Australasian Railways Association has been arguing for MDL road pricing since at least 2010, when it released a paper on the subject that pointed out that access charges account for 30 to 40 per cent of rail freight charges, but equivalent charges accounted for only 5 to 10 per cent of costs for the same freight carried by road. The ARA also called for a national land transport regulator to achieve “competitive neutrality” between road and rail.

But the elegant logic of the proposal conceals significant challenges to its implementation. To get the reform through the Council of Australian Government (COAG) – which has considered MDL pricing before, in 2008 – the Federal Government and states would need to be assured they would not lose revenue. The numbers would have to be carefully calibrated. And then there’s a powerful road transport lobby to be won over. If anyone doubts its power, refer to that image, reported in The Monthly but seen often, of Prime Minister Tony Abbott in his office with a model Linfox truck on the bookshelf behind him.

"Roads scholar" Tony Abbott: $20b in new freeway projects for Sydney and Melbourne, no commitment to inland rail http://t.co/Web4OpDqaN

The hard evidence of the Government’s preference for roads over railways is contained in this year’s Budget Paper No 1, which shows road funding far outstripping rail funds over the outlook years ($1.08 billion for rail in 2015-16, compared to $5.93 for roads) and both actually declining from 2016-17. Never mind Mr Abbott’s oft-stated view that the states are responsible for urban rail projects, there’s precious little Federal commitment to regional and freight railways either. In this context, it’s very hard to see the Inland Rail project, reported in Independent Australia, being on track for completion within the 10-year timeframe forecast for its construction. The Federal contribution to the 1,730 kilometre and $5.7 billion railway connecting Melbourne and Brisbane is a paltry $300 million — or 10 per cent of the $3 billion the Feds promised Victoria to build the now-abandoned 6 kilometre East West Link.

So much for the “infrastructure prime minister”.

So what hope is there for Jay Weatherill’s road tax proposal? After nearly two years in office, the Abbott Government can point to scant reform achievements beyond a couple of three-word slogans upon which it won office, particularly in energy, transport, or – worst of all – climate and environmental policy. Its energy and agriculture white papers have been damned with faint praise and both have been criticised for largely ignoring climate change. Renewable energy investment went backwards, while it wondered what to do about a Renewable Energy Target it didn’t want. Its major “budget emergency” measures have been largely abandoned, after stalling in the Senate.

In such a fraught political environment, and with tensions between the Coalition partners rising and the distraction of “Choppergate” rehabilitating Opposition Leader Bill Shorten, the Government is clearly looking to notch up a credible reform achievement. Road tax reform might just fit the bill. 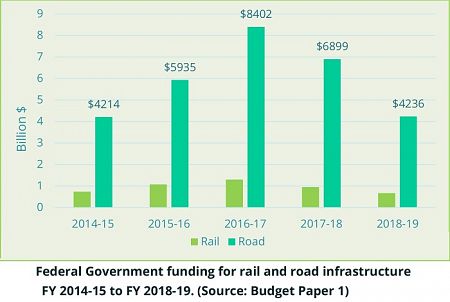 Even if it is for the wrong reasons, the political pressure to secure almost any reform may yet bring about a national policy shift that – coupled with more investment in the regional rail network – would help get more long-haul freight on trains and make roads safer, conserve our fuel supplies better, and minimise greenhouse emissions, road damage and urban noise.

Wherever we live, we would then all be better off.

Max Berry is handling public relations for the 2015 Rail Freight Conference in Melbourne on September 4. 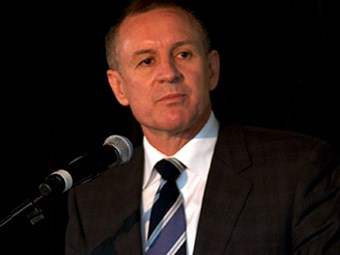