Malcolm Roberts has since lost his seat in the Senate over his British citizenship, but in this July story, which received more than 13,000 unique views, lawyer Krish Na examined whether he could have lost it over his connection to India.

Malcolm Roberts, in spite of his express denials, very likely continues to be a citizen of India, thanks partly to India’s former Prime Minister Rajiv Gandhi. Krish Na reports.

AFTER GREENS Senator Larissa Waters’ resignation, One Nation Senator Malcolm Roberts issued a statement saying that he asked for clarification from ‘Indian authorities’ on his citizenship in 2014 and said they confirmed that he is not an Indian citizen.

In October 2016, Roberts made a similar claim on Twitter. However, an examination of the Indian citizenship laws and Roberts’ documents reveals that the claims do not hold water.

Here are the facts:

1. ‘I never have had Indian citizenship’: FALSE

I don''t have, and never have had, Indian citizenship. You are, however, correct in saying I was born in India

Roberts’ claim that he never was an Indian citizen is easily disproved.

As per Section 3(1)(a) the Citizenship Act, 1955 of India, every person born in India on or after the 26th day of January 1950, but before the 1st day of July 1987, is a citizen by birth. Citizenship status of the child’s parents is immaterial. An Indian High Commission spokesperson did issue an ambiguous statement, as reported by The Australian, that a child born in India of foreign parents was “most probably going to be a foreign national”, but this interpretation is simply not true and will not hold up in a court.

There is a reason why India had such a generous citizenship rule until 1987. India gained independence from British rule in 1947 and the status of several Indian residents was uncertain. Lots of people held British passports or documents from other countries under colonial rule, such as South Africa, Nepal and Fiji. The generous birth citizenship rule helped Indian-born children start with a clean slate, without the bureaucratic hassles of renouncing foreign citizenship and applying afresh.

After 1987, they started tightening the rules.

Malcolm Roberts was born on 03 May 1955 in Disergarh, India. There is no dispute about this fact. Roberts himself confirms it and all his official documents list India as his place of birth. By virtue of that fact, he automatically became a citizen of India by birth. The Indian law is very clear on this point and lawyers can easily corroborate that fact. Roberts may not like it, but he was unambiguously an Indian citizen at birth. This point is crucial to establishing his current status as well.

It has been reported that Malcolm Roberts is currently attempting to obtain a letter from the Indian High Commission confirming he never was an Indian citizen. Even if such a letter is issued, it is very unlikely to hold up in an court.

2. ‘I do not have Indian citizenship’: DOUBTFUL

Roberts’ birth citizenship of India is immaterial to the Section 44 of the Australian Constitution as long as it can be established that he has renounced it. It is safe to presume that Malcolm Roberts does not own an Indian passport currently.

As he bizarrely tweeted, he also does not own a 7-Eleven store to prove that he is not an Indian citizen.

However, lack of a passport, or not conforming to a racist stereotype, is not proof enough. The question is, has Roberts conclusively renounced his Indian citizenship?

There are two ways in which he could have done it.

Firstly, Roberts could have renounced his Indian citizenship by submitting a Form XVII in writing to the Indian authorities as required by the Citizenship Rules. 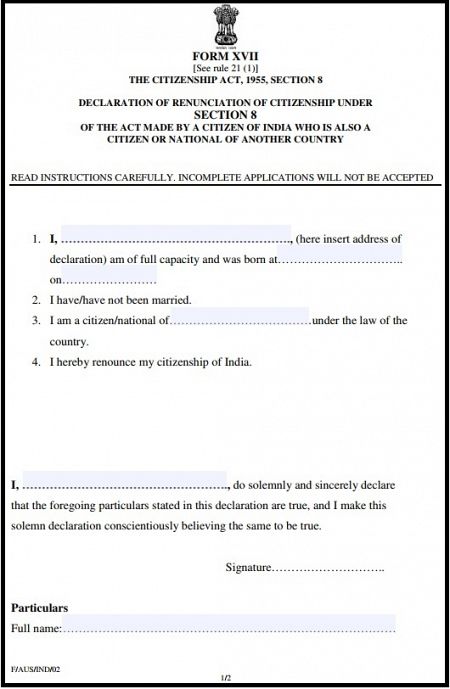 Malcolm never submitted one of these (Image via immihelp.com)

It is clear that he has never submitted this form or he would have produced it long ago.

As per the law, Roberts can also automatically cease to be an Indian citizen if he voluntarily acquires another country’s passport. His supporters argue that this is proof he is no longer an Indian citizen. Even the Indian High Commission issued a statement to this effect.

While, on the face of it, this looks like a valid argument, there is a big wrinkle here. The operative word is “voluntarily”. Since minors do not have free will under Indian law, they are not considered to have voluntarily acquired foreign passports. This allows for Indian minors to hold dual citizenship in some cases. This is to allow India to intervene if minors of Indian origin are caught in international custody disputes, for example, or even war. There are official orders issued by the Government of India that confirm minors can hold dual citizenship. 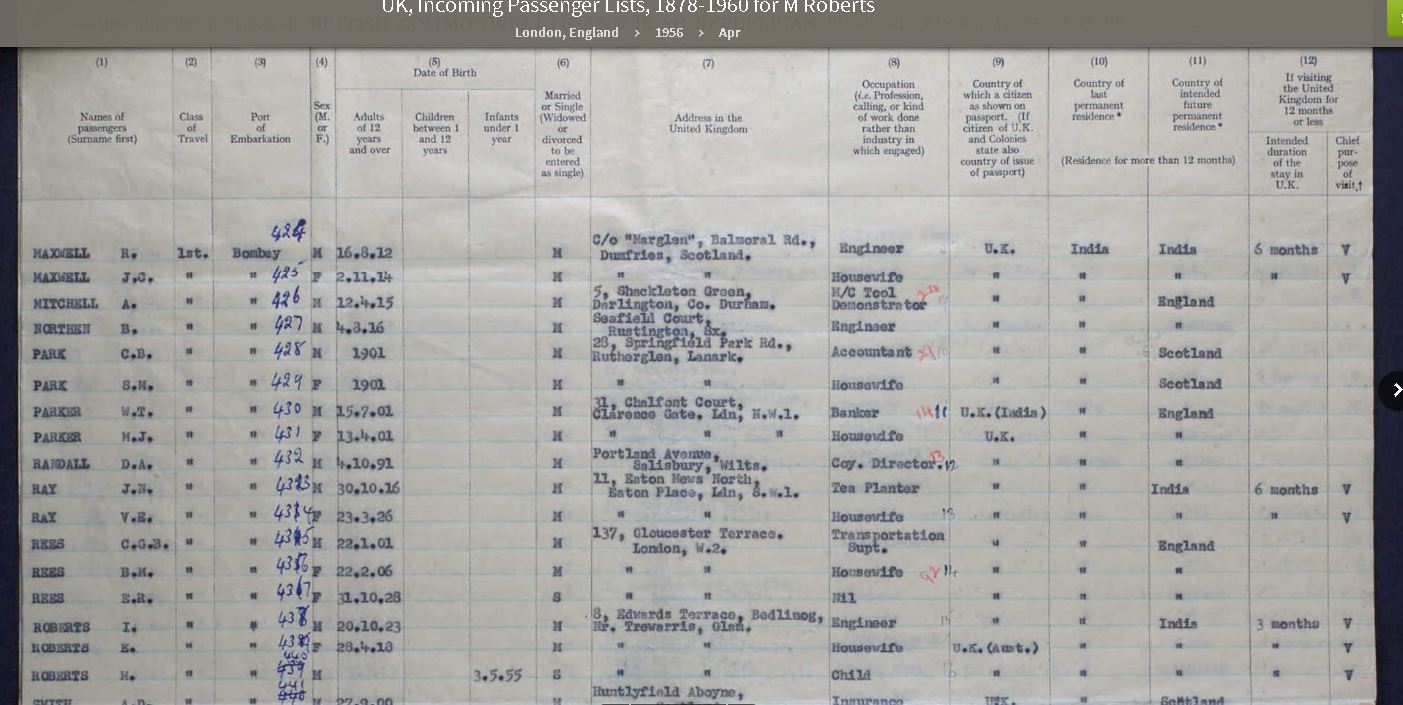 This shows that when Roberts first obtained a non-Indian passport, he did not do it voluntarily. As a result, the automatic renunciation does not apply to him.

Here''s where the late Rajiv Gandhi comes in.

When Rajiv Gandhi unexpectedly became the Prime Minister of India after his mother was assassinated in 1984, the opposition parties in India scrambled to find dirt on him. Gandhi’s marriage to Sonia, an Italian national, became a political target. Opposition alleged that he was not an Indian citizen since, as per the Italian law, he became an Italian citizen after marrying Sonia and buying property in Italy.

The matter, eventually, went to the Supreme Court of India. In a landmark case law, Bhagawati Prasad Dixit vs Rajiv Gandhi (1986), the highest Court in India set a precedent that applies to the Roberts'' situation as well.

“When once a person is admitted or held to be a citizen of India, unless there is a decision of the Central Government under S. 9(2) of the Citizenship Act that he has acquired the citizenship of a foreign country, he should be presumed to be an Indian citizen.”

So, if we examine the facts now, we have:

The facts in Larissa Waters’ case are eerily similar to this one: an Australian citizen who became a foreign citizen by birth and wasn’t aware of it, so never made a conscious attempt to renounce their citizenship. The only difference is, Canada has a citizen’s register and allows dual citizenship, while India doesn’t. To prove Indian citizenship for someone born in 1955, all you need is an official record that they were born in India. Roberts has plenty of those.

Roberts is now apparently attempting to obtain some sort of a document to save himself from going the Heather Hills way. Firstly, this disproves his claim that he checked with the Indian authorities in 2014 and they have confirmed he is not a citizen. He may have only asked his local 7Eleven store owner and assumed that’s enough.

Secondly, and most importantly, if he has no document in hand until now, his Indian citizenship is presumed to be intact. He can be registered to vote in India. He can even contest for the upcoming vice presidential elections in India.

And even if the Indian Government issues a document now saying he never was a citizen, it will open a can of worms and expose him to potential litigation because there are simply too many facts going against those claims. The document itself would need to be tested in a court for all the nuances the law presents.

There''s always this one. pic.twitter.com/TKLcYhZXdf

28 December 2017, 9:30am Malcolm Roberts has since lost his seat in the Senate over his British citizenship ...

21 July 2017, 1:00pm Malcolm Roberts, in spite of his express denials, very likely continues to be a ...
Join the conversation
comments powered by Disqus
News updates