Ross Jones broke the story of James Ashby's donated plane way back in January 2017, where it has gathered 14,500 unique views. This IA story was appropriated by ABC Four Corners in April and the rest of news media soon thereafter. This was the first of three stories our Sydney bureau chief had in IA's 2017 top ten. 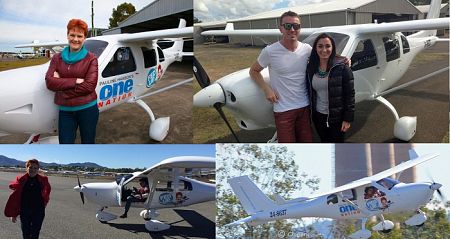 Whose plane, Pauline? And who pays for it? (Images via One Nation, ABC and cqplanespotting.blogspot.com.au — note rego on fuselage)

The Australian reported One Nation boss Pauline Hanson boasting about her frugality on Monday (16/1/16):

Senator Pauline Hanson says she fills her own plane with petrol and drives herself to the airport, parking in the budget carpark and getting a bus to the terminal.

The Queensland senator says she also always travels economy and if she needs to go to remote places she uses her own plane at One Nation's expense.

"I've still got my plane, well the party's plane, but all the trips I've done in that since the election I've filled it up myself," Senator Hanson told Sky News on Monday. 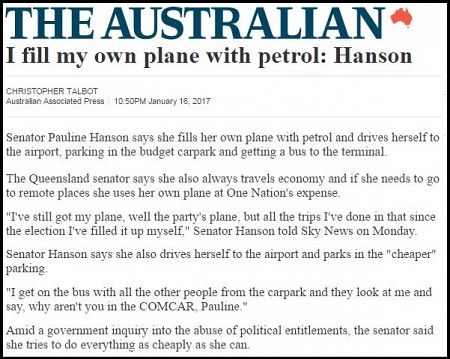 Which is great, except neither Pauline Hanson nor One Nation owns the aeroplane in question. It is, in fact, owned by James Ashby. Personally.

IA spoke with Recreational Aviation Australia and was advised James remains the sole owner of Jabiru 24 8637. No mention of One Nation or Hanson on the registration.

One Nation’s Electoral Commission Disclosure Return for the period 1 January 2016 to 30 June 2016 shows the party paid $1,187 to Jabiru Aircraft for servicing James’ machine, but does not record any payments for its use, such as hire or lease fees.

Because of its small capacity, a refill of fuel in the Jabiru is well under the $1,000 mandatory reporting requirement.

The two-seater Jabiru 230D is classified as an ultra-light and so carries RAA registration, rather than the VH registration of heavier aircraft. Nevertheless, it is not cheap, with the manufacturer’s web site showing a fly-away price of around $106,000.

How did James come to own this little gem?

A gift from a wealthy benefactor perhaps? Maybe he leases it, maybe he paid cash for it, who knows?

What is clear is that One Nation paid $17,000 to companies associated with James for printing services over the first six months of 2016. Over the same period, it made no apparent payments to Ashby for the use of his $110,000 investment.

Just as a rough guide, the Airline Owners and Pilots Association runs an aircraft lease finance calculator, which currently shows a default rate of 4.8 per cent. With, say, a 20 per cent deposit, it calculates a $110,000 aircraft would cost $1,568 a month over five years.

But there is no evidence of any such payments in One Nation’s disclosure return.

I have witnessed on multiple occasions Pauline Hanson catching a COMCAR to parliament with Sen. Roberts and James Ashby. https://t.co/RPvKvK91Gd

Greg, who is Pauline’s brother-in-law, only assumed the treasurer post last August, after a bloody internal cleansing did for his long-standing predecessor Ian Nelson. So Greg wasn’t treasurer for the first six months of 2016. What would he know?

Greg said he couldn’t tell me anything about the plane; had no idea who owned it.

Nor could Greg shed any light on the $191,000 Pauline personally tipped into the party over the first six months of 2016.

But even without Greg’s help, Pauline’s claim that she 'uses her own plane at One Nation's expense' is obviously untrue.

And she knows it.

The question is: who paid for it?

Pauline has been out on the front foot to a gullible media trying to claim the high ground in the great polly swindle scandal.

But something about that plane doesn’t smell right.

It stinks to high heaven.

Uncover the truth months before others. Subscribe to IA.