#3 TOP IA STORY OF 2017: Barnaby Joyce: Peeling back the rumours

Ross Jones went to Tamworth to investigate the many rumours swirling around Barnaby Joyce, for his third story in IA's top ten from 2017 – this one with over 26,100 unique views – and the second of three on the Deputy Prime Minister that found its way into this short list. 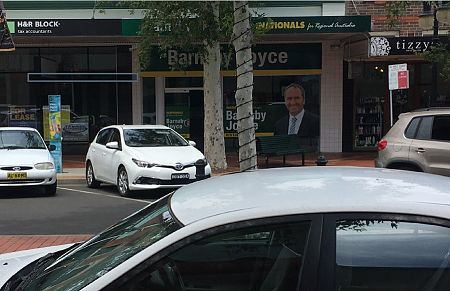 I was in Tamworth to see if we could check out at least some of the very the nasty rumours circulating about Barnaby Joyce. Some had been vaguely alluded to in the mainstream media. More alleged in the alternative media. And many, many more circulated on social media. Are they true? Or are they just lies sown by Barnaby’s political foes? Or is the truth somewhere in between?

IA wanted to find out. Peel Street seemed like a good place to start. Get a feel for the candidate.

This tree-lined boulevard forms the spine of the town and plays host to national chain stores, cafes and the usual rural mix of independent retailers. Wide median-strip, parallel parking one side, rear-to-kerb on the other.

Before it became a TAB, number 247 Peel Street had been a Persian rug shop. It has now been transformed into Barnaby Joyce’s campaign office for the 2 December New England by-election.

The exterior of the modest shop, sandwiched between H&R Block and Tizzy's Hair Salon, is covered in green and gold Nationals colours with Barnaby’s name writ large everywhere. The window carries a large photo of Barnaby taken, by the looks if it, several years and many schooners ago. He looks pretty good.

Inside, it is a bit surreal. The old TAB has been divided by a wall-to-wall and floor-to-ceiling green curtain, enclosing, I would estimate, about a third of the old shop. The only decorations on the visitor side are a few cheap trade-show type signs for the Nationals and an empty reception desk. No chairs.

After a few minutes – an eternity in a lurid green room – a young woman emerges from the suspiciously quiet electoral engine room behind the curtain.

“No, we cannot provide an itinerary for Barnaby. He is not in town this week. What is your interest anyway? Did you want to take photos? Why? Is it for money? Are you selling photos to News Corp?”

This seemed a pretty silly question, seeing she was holding my IA card.

The National’s hospitality greeter obviously wanted me out of there. “I’ll get the press secretary to call you,” she said, through clenched teeth, “goodbye.”

She didn’t actually push me out the door, but I got the feeling she wanted to.

I did not get a chance to ask her about anything on the list of Barnaby rumours I had in my briefcase.

In no particular order, these rumours were that:

Where to start? The ute seemed easiest.

After a bit of nosing around, a witness name and place of work surfaced. A little after 3pm Friday, I paid a visit to this workplace — a drab affair with glass partitioned offices. I had a physical description of my witness, but couldn’t see her from the lobby. I asked for her by name with the young man at reception:

“She is busy at the moment. Do you have an appointment?” I said I didn’t.

He said to leave my number and she’d call. There was no invitation to wait.

If a stranger in a small town bowls into a small office, asks for a staff member by name and refuses to state his business, gossip consumes that office like wildfire.

I told her I was a writer and wanted to talk with her, off the record, about a female – maybe one of Barnaby’s daughters – driving Barnaby’s car with a loud-hailer. I understood she saw that?

“Oh,” she gasped, “I thought it was his mistress!”

I said that would be fine, thanks.

“Who told you about me?” She sounded like she really wanted to know.

I said I’d tell her when she called. She did not call. At 6.30pm, I gave up waiting and went to the pub.

Which means, sometime between 3.10pm and 5pm, my witness – who had presented as jolly and keen to talk, and who was dying to find out who gave me her name – went quiet.

Whatever prompted her do so, it trumped her overpowering small town curiosity.

The next rumour in my bag concerned Barnaby’s dealings with women other than his wife.

There’s a lot of social media chat about this aspect of Barnaby’s life, but I was interested in one particular event back in 2011. I understood there might have been witnesses.

And indeed there were.

Before we go further, let me point out that the Nationals run New England. If they don’t like you, that is the end of your career or business. Worse than the Masons.

So, getting anyone to talk about this allegation – an allegation that the New England National’s parliamentary representative is a Weinstein-like figure – is like pulling teeth.

A male witness we did locate and speak with did not see any initiating activity, but he did, allegedly, see a young girl in obvious distress at a Canberra pub in 2011. Then he saw an older female allegedly confront Joyce about his actions regarding the girl. And then he allegedly saw Joyce brush this woman off with what he was convinced was a pinch on the backside.

After pub closing time, an allegedly inebriated Joyce, according to our witness, stood outside on the footpath in such a way the women felt intimidated and requested an escort to their cab.

The 6 most recent photos of Barnaby Joyce show him drinking https://t.co/TVO0xliDBb @theage Can he not afford professional help?

IA is aware of the identities of the women allegedly involved and has had oblique (texting via a third party) communication with them.

They most recently advised that there was ‘no point in pursuing it at this time’.

We have pursued this rumour as far as we can at this time. The truth about it is still not clear.

The other three rumours pretty much go together — that is, Barnaby has been having an affair for some time with a staffer, that staffer is now pregnant and that Barnaby has been kicked out of home and is hunkered down at his sister’s.

This group of rumours is rife in Tamworth and everyone, at least the agriculturalists and barflys I spoke with, has an opinion.

I could not find anyone who knew Mr or Mrs Barnaby personally and who also knew, for a fact – not rumour – that Barnaby has moved out.

But if the gossip of Barnaby’s affair with a Nationals staffer and her subsequent pregnancy is true, it would be no surprise if Joyce ended up at his sister’s.

IA obtained a mobile number for the staffer allegedly involved, but this number has been cancelled. Other attempts to contact her failed (which may or may not be a reflection of my investigation skills).

This is what True Crime Weekly had to say about this allegation:

Mr Joyce has now though allegedly been kicked out of his own marital home in Tamworth by his wife of 24 years, Natalie, after she learnt of her husband’s philandering ways. The couple have four daughters aged between 15 and 20. The family revealed only in March of this year in a puff piece in the Weekend Australian how little they saw of Mr Joyce due to his political commitments.

Some sources now claim that article about Mr Joyce’s family life seven months ago may have been produced in reaction to initial rumours of a sexual affair being conducted with one of his employees. Mr Joyce has reportedly engaged in the relationship with his staffer for between eight to 10 months.

I had not previously come across True Crime Weekly, so I called the guy who runs it, Serkan Ozturk. Mr Ozturk runs a PR company and says he is an MEAA member and therefore beholden to its ethics. He is also an occasional contributor to Crikey. He claims he does not make stuff up.

The point is, Ozturk says, since publishing the story back on 24 October, he has not heard boo from the Nats. No defamation threats (he is experienced in these matters), no nasty Facebook/Twitter threats or comments — nothing. He refers to it as an "eerie silence".

It is worth noting Ozturk is the only person so far to have put the Joyce issue out there, so maybe it was just ignored? But if I found his article when I Googled “Barnaby/Scandal” then certainly the Nats would have.

So the silence is deafening.

As much as I can tell, Barnaby, an accountant in his previous career, gets little exercise, has a serious fondness for the drink, allegedly smokes cigarettes, habitually stays up late, works in a highly stressful job and is a workaholic. So, do not be in the least bit surprised if you read of medical intervention.

To step back a moment, my overwhelming feeling about Barnaby and the New England Nats is that there is a shroud of silence – about whatever is going on with Barnaby – being desperately held in place until 2 December. At the moment, as far as they are concerned, that’s all that counts.

Turnbull was probably right when he said:

“If there were a by-election in the seat of New England, Barnaby Joyce would be returned.”

After all, Joyce is up against a grab-bag of nobodies who between them will take about 45% of first preferences leaving Barnaby with a thumping win.

The theory may not hold if someone suddenly finds enough courage to speak publicly. Once one person comes forward, like in America with Weinstein and Spacey, there may be many more.

But then again, it may all be lies. Though it is hard to imagine it could be all lies.

If you know more about this story, please contact the author at ross@independentaustralia.net. All confidences will be respected, absolutely. Joyce was 'out of towner' in 2013, parachuted in from Qld and had no qualms about public forums then. https://t.co/YgQQb2gtJK #auspol

This could explain why some candidates don't want to front up in "uncontrolled" environments .. https://t.co/ixuO01FgpR