The KPMG report into Fair Work Australia's investigation into the HSU is vindication for some — and a cream pie in the face for others; a smiling Peter Wicks reports.


GEORGE BRANDIS must be having a coronary.

After he kicked, screamed, rang virtually everyone in the phonebook, and had Craig Thomson investigated by everyone except Inspector Gadget — imagine his frustration yesterday when the only investigation – out of many – that found Craig Thomson had questions to answer, was torn into tiny little shreds by KPMG.

That’s right, over three months after I first started raising questions regarding Fair Work Australia’s so-called investigation into the Health Services Union, it turns out – well, what d’ya know! – it does look dodgy. Even though I was referred to as being part of the "dark forces" by some, the investigation now looks as if it’s not fit to be used as toilet paper.

For those who missed it, last night KPMG released their Independent report on the FWA investigation into the HSU. A link to the report is below.

Read the KPMG Review into the FWA in full

Some would say that this KPMG is actually the first truly independent report on the subject. After all, the now disgraced FWA investigation was the basis for virtually every press article since — and every other report and enquiry into a Union that has been left decimated, especially since Kathy Jackson took over.

So, where to now?

Craig Thomson is clearly a happy man at the moment, and I guess he should be, some may remember this front page... 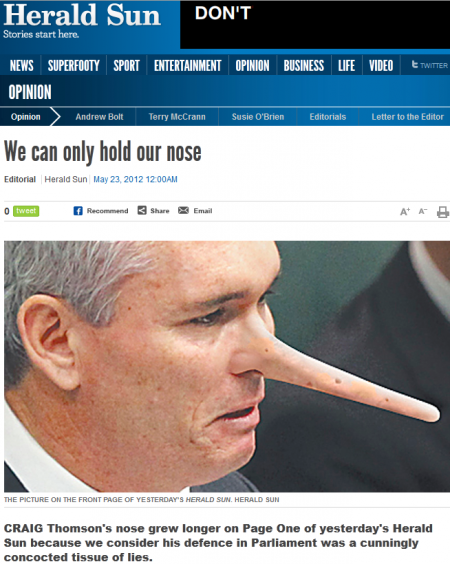 Well, now that his so-called “conspiracy theories” have been backed by both KPMG and FWA, who commissioned the KPMG report, it is the Herald Sun that now looks a premature ejaculator — firing off early with its ludicrously offensive front page. (Sometimes it’s best to bite your lip and hold on fellas; check your email spam folder for remedies.)

However, Bill Shorten was right yesterday when he said Craig will still have to face court before claiming victory.

This report does not prove Craig innocent – though under our system of law, people are presumed innocent until proven guilty – it just proves the one investigation that condemned him was fatally flawed.


Tony Abbott was missing yesterday from all the action on this, preferring instead to send the man Kathy Jackson seems to have on speed-dial out to face the press, Eric Abetz.

Predictably, Abetz was all about how FWA is “Gillard’s Baby” and it is her mess, inept, badly run, blah, blah, blah...

If FWA is “Gillard’s Baby”, then she adopted it from the Coalition. Yes, WorkChoices has gone, but that’s a good thing. Gillard may have given FWA a new name, a fresh coat of paint, and some changes to industrial relations policy to work with, but those have been a success largely.

This has been FWA’s first major “balls up” — and why’s that, I wonder?

The reason so many questions were raised in the first place was because of the involvement of Michael Lawler — fiancé of Kathy Jackson and second best dancer at union functions. His alleged involvement and influence over the investigation are to blame for most of the questions that have brought calls for a new code of conduct, a Senate Inquiry, a Judicial Inquiry or even a Royal Commission. Allegations against him have brought FWA to its knees and totally trashed its reputation.

Michael Lawler is Tony Abbott’s baby in that regards. After all, Abbott appointed him; Abbott even sang the praises of his fiancé, Jackson, on the floor of Parliament. I can’t wait to see the encore of Abbott's performance after Victoria Police finish their current and ongoing investigation into her.

“KPMG has not been provided access to the FWA computers or any smart phones and handheld devices allocated to the Vice President.”

Hmmm… why is that, I wonder? We have already seen how he gave Jackson, whose Union was under investigation, access to the FWA network. We have also seen how somebody else with a computer named michael.lawler hacked into the HSU network using Jacksons log in details.

Great job, Mr Abbott; remind me not to accept any references from you. Ever.

Terry Nassios, I kind of feel sorry for him. He was called in to speak at a Parliamentary Inquiry into the FWA today, and asked “if approached again to conduct a similar investigation, would he?” Nassios replied “I’d run away as quickly as possible”. This is probably an understatement. He probably could not get far enough away on foot. Despite being on long leave since the FWA investigation was released, I bet he wishes he was now driving that buggy thing that landed on Mars. He was quite obviously under-resourced, it would seem he was given tampered evidence and serious questions remain about whether he was influenced from within.

As for the future of the now demerged HSU, things will be tough.

But, on the other hand, things are now in the hands of the members for what seems like the first time in an eternity.

Those wishing to rid themselves and the Union of the influence of Kathy Jackson best remember the following names in the upcoming election — and avoid them like the plague:

There is also talk that members in NSW may be faced with paying the bill for the Administrator and all of his staff as he was appointed out of NSW office, despite him being there to sort out the mess coming from Victoria.

Kathy Jackson, it seems, has only just moved to NSW and already members may be stuck paying for the mess she, seemingly, created. Maybe her entitlements should be garnisheed to pay for it all.

But, it’s not all bad news. Down in Victoria – which is a financial wasteland, with approximately $1.3 million in legal fees owed after an internal fight between Pauline Fegan and Kathy Jackson turned septic – a new employee may be coming.

Some of you may remember an article I did about Rob Elliot— the man with the best job in Jacksnville. Guess what? If his contract is continued and not torn up, he may well be coming back; maybe even going on the payroll in Victoria with his immense salary and benefits.

If he does come back on board, don’t hold your breath waiting for him to show up for work.

You can follow Peter Wicks on Twitter at @madwixxy. See also our dedicated Jacksonville page, which contains links to all 21 stories in this series — and more.