A parliamentary committee tasked with making it easier to offend, humiliate, insult, harass and vilify people based on ethnicity and racial characteristics has failed to come up with recommendations that satisfy the hard right. As Doc Martin reports, this is bad news for racists and Malcolm Turnbull.

Who would have guessed? A parliamentary inquiry into how the Racial Discrimination Act 1975 stymies freedom of speech for racists has not buckled to pressure from right-wing commentators, the Institute of Public Affairs and conservative politicians, like Eric Abetz.

Thanks to the lack of action taken by the committee, it is not now going to be easier for racists to ply their foul trade without legal sanction. Poor old Andrew Bolt, sacrificed for nothing and still not redeemed.

There’s no “I told you so!” moment for Mr Blot. Let’s have a moment’s silence and then laugh like drains at his displeasure.

It seems that the majority of us don’t actually want to be racist bigots — and isn’t that a good thing? 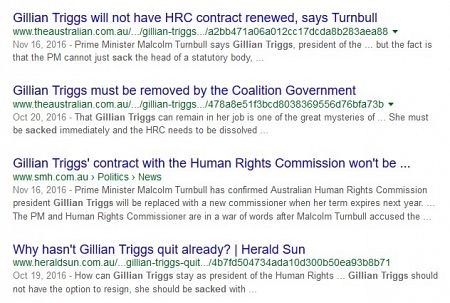 No guts, no glory

How disappointing it must be for the baying free speech fundamentalists at NewsCorpse to know that their pet campaign of 2016 has achieved absolutely nothing. Zilch, zero, nada, no change.

After the hundreds of thousands of words dedicated to forcing the Turnbull Government to reluctantly bend to its will over Section 18C of the Racial Discrimination Act and sack Gillian Triggs, the Parliamentary Committee tasked with “reforming” the legislation has recommended only minor changes.

In a lengthy report, the committee made 22 recommendations, many of them sensible procedural changes that would streamline the complaint resolution processes of the Human Rights Commission Act 1986 (Section 11) so that complainants and respondents would know from day one what their chances of success would be.

Other, uncontroversial, changes include amendments to that section of the HRC Act (Section 46) that sets out reasons why the HRC President might terminate a complaint process if it has no reasonable chance of success.

We Didn't Need Another Inquiry To Figure Out That Hate Speech Is Not Free Speech https://t.co/JVWEIyS6lQ

One of my favourite recommendations is that fee-hunting lawyers would be expected to pay costs if they encourage a complaint which is later found to be frivolous, or had no reasonable chance of success:

The committee recommends that consideration be given to whether a complainant's solicitor should be required to pay a respondent's costs where they represented a complainant in an unlawful discrimination matter before the Federal Circuit Court or Federal Court and the complaint had no reasonable prospects of success.

What the Committee didn’t do is just as important as what it did. It was supposed to recommend changing the Racial Discrimination Act in line with what the government wanted — a loosening of the restrictions on racist speech.

I’m not sure why the committee was unable to meet its brief, as set out by Attorney-General George “I can’t recall” Brandis in November 2016.

Brandis wanted to know if sections of the Racial Discrimination Act imposed ‘unreasonable restrictions on freedom of speech’. He was already on the record saying that it did – remember that we have the “right” to be bigots?

Brandis famously made this claim in 2014 when the Abbott Government was determined to change the RDA to make it easier for racists to be total fuckwits and to rehabilitate Andrew Bolt.

“People have the right to be bigots you know. In this country people have rights to say things that other people find offensive or bigoted.”

Well, if Brandis still wants to change the law, he might have to roll Turnbull first and that’s not going to happen … right?

It’s not OK to humiliate, insult, offend, harass or vilify on the basis of race

The argument presented to support the amendment or removal of the Section 18 provisions was that it “stifled” freedom of speech and had a “chilling effect” on people who simply wanted to voice “unpopular” opinions. Several media organisations, shamefully, made submissions to this effect, but without the facts to back up their claims. NewsCorpse, in particular, went all out, even getting someone to help several barely-literate cartoonists to prepare “submissions”.

But the parliamentary inquiry heard evidence that there is no chilling effect and nobody has actually been prevented from voicing “unpopular” (dog-whistle code for “racist”) views.

When it came to changing the now notorious Sections 18C and 18D of the Racial Discrimination Act 1975, the Committee was hopelessly divided and basically didn’t recommend anything as this “recommendation” so clearly sets out:

2.139: The committee received evidence about a number of proposals in relation to Part IIA of the Racial Discrimination Act 1975. Given the nature and importance of the matters considered by the committee for this inquiry – primarily the right to freedom of speech, the right to be free from serious forms

of racially discriminatory speech, and the importance of the rule of law – views varied among members of the committee as to how to balance these appropriately. The range of proposals that had the support of at least one member of the committee included:

(b) amending Part IIA of the Racial Discrimination Act 1975

to address rule of law concerns and to ensure that the effect of Part IIA is clear and accessible on its face, by codifying the judicial interpretation of the section along the lines ofthe test applied by Kiefel J in Creek v Cairns Post Pty Ltd that section 18C refers to 'profound and serious effects not to be likened to mere slights';

(c) removing the words 'offend', 'insult' and 'humiliate’ from section 18C and replacing them with 'harass';

(d)amending section 18D to also include a 'truth' defence similar to that of defamation law alongside the existing 18D exemptions;

(f) criminal provisions on incitement to racially motivated violence be further investigated on the basis that such laws have proved ineffective at the State and Commonwealth level in bringing successful prosecutions against those seeking to incite violence against a person on the basis of their race.

The Committee, thankfully, was not persuaded by submissions calling for radical change.

COMMENT Battle over 18c is not about freedom of speech - it's about making hate speech OK #auspol https://t.co/4hkZcNjz5e

Perhaps more importantly, the Committee was not bullied by a NewsCorpse campaign against Section 18C that has been ongoing since September 2011 (when Bolt was found to be racist) and included vicious personal attacks on Human Rights Commission President Gillian Triggs by thuggish columnists like Chris Kenny, Miranda Devine and Rita Panahi — all of whom, I must add, are paragons of virtue signalling when it comes to their own interaction with critics “flogs”. 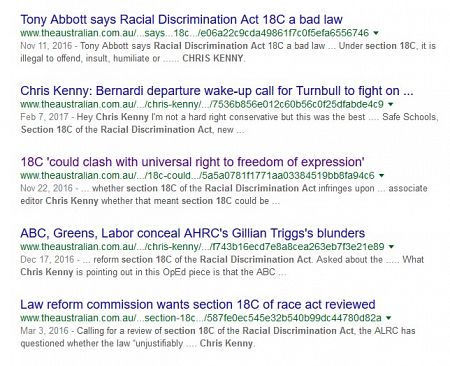 The Australian and the rest of the NewsCorpse stable (a place renowned for producing manure) shouted, ranted and stamped its well-shod feet over 18C — demanding, week-in and week-out that the law be changed because it held back freedom of speech for its columnists and cartoonists.

They also repeatedly called for Triggs to be sacked and even for the Commission itself to be abolished.

So shackled by political correctness, so the narrative goes, were NewsCorpse hard-working, hard-living calumnists, scribblers and talent-bereft cartoonists, that they were forbidden from speaking their minds. Or, at least tipping the contents of what passes for their minds onto the floor and smearing the results on the walls, like misbehaving, nappy-soiling toddlers.

At least that’s what they’d have us believe — if, in fact, we could believe a word that spills out across the pages of the Daily Terrorgraph, the Horror Sun or the Catholic Boys’ Daily.

They are visibly upset by the setback and no doubt angrily plotting their revenge.

However, I really couldn’t care less. It is a sign of the growing irrelevance of these blowhard puffinators that, this time at least, their bellowing has been rightfully ignored.

The Fizza is stuck between a Rock and a hard right

On the other hand, the political fall-out is about to get really interesting.

The Human Rights Committee’s failure to recommend significant changes to Section 18C or to stiffen defences under 18D, that would allow bigots to go unchallenged, has given Prime Minister Turnbull a severe factional wedgie — perhaps the worst of his political career.

Already under pressure – if not daily mortar attack – from his increasingly feral, febrile and ferocious right flank, Turnbull was hoping for a nice little pay-off.

If the Committee had recommended the changes demanded by NewsCorpse, the IPA and his own right-wing, the Fizza could have enacted them while pretending all along that he is still a small "L" liberal who was only implementing what a bipartisan committee recommended after an “independent” public inquiry.

But now, Turnbull is stuck and has to weigh up the electoral costs.

If he chooses to mollify the conservatives he will alienate a huge number of ethnic communities, including the powerful Australian Jewish lobby.

If the “Fizza” does nothing – given his track-record, the most likely option – the Coalition might lose more ground on its right to the One Nation nutters, the BerNazi Conservatives’ and assorted far-right fringe-dwellers.

If he caves in to caucus pressure from the conservative group – which includes a couple of powerful voices in Cabinet – many traditional Liberal voters in some conservative ethnic groups are likely to direct votes away from the coalition in Sydney and Melbourne, in particular.

The next parliamentary sitting will be interesting. We might expect to see at least one private member’s bill pushing for the conservatives’ wish-list of changes to codify the right to bigotry. Such a bill will get support from a number of backbenchers and at least a couple of ministers.

Just another reason why the “Fizza” is cactus and likely to be deposed sooner, rather than later.

Is “Bookshelves” Brandis already doing the numbers along with “Sinister” Mutton? We know “Two-Punch” Tony has already taken off his gloves and socks in anticipation.

Section 18C of the Racial Discrimination Act is under threat from the current government. Pledge. Walk for Respecthttps://t.co/yNTRpeykAm

Everyone has the right to be good! Subscribe to IA for just $5.