SUBSCRIBE   DONATE LOGIN SHOP
SUBSCRIBE   DONATE
ELECTION LIVESTREAM: Time for toast! Murdoch-free analysis
What to do if you spot conspiracists at the voting booth
Shop IA merchandise!
12 reasons why the Morrison Government should be ‘toast’
Independent Australia needs YOU!
Crime

Who bombed the Hilton? (Part 1) The bomb and the bin

IN FEBRUARY 1978, a bomb hidden in a garbage bin exploded as it was emptied into a garbage truck outside the Hilton Hotel in Sydney.

The blast killed two garbage collectors, Alex Carter and William Favell, and a police officer, Paul Birmistriw. This triple-murder remains the city’s most famous unsolved murder and is the most hotly contested.

In the culture wars over the interpretation of Australian history, two theories compete about the reason for the Hilton bombing. On the Right, with its historical ties to the police and the deep state, the theory that the members of an obscure Indian sect called Ananda Marga (the Margiis) planted the bomb to kill the Indian President, Moraji Desai, holds sway.

The Left view was represented by two badges popular in the 1990s: the Australian Security Intelligence Organisation (ASIO) bombed the Hilton and Tim Anderson was framed. For the Left, the Hilton bombing was the result of a bungled PR exercise by the deep state and the subsequent frame-ups of the Margiis were fishing for a suitably saleable scapegoat.

Ananda Marga calls for a Royal Commission on the Hilton Bombing https://t.co/km4IH8V70e

The Hilton bombing played a central role in the restructuring of Australia’s security state, transforming the role of the intelligence agencies, including ASIO, from countering "communist" subversion to terrorism. Before the Hilton, ASIO and its state police partner, Special Branch, were defended by the Right because of their anti-communist political orientation and were regarded by the Left as a political police that spied on them.

ASIO and Special Branch fed right-wing journalists and politicians with "dirt files" — information to be used to discredit their opponents. The Left had their phones tapped, their houses burgled, their sexual activities recorded (for blackmail), and even their job applications were vetted. Through the usual bureaucratic process of mission creep, by the end of the Menzies years, anyone could come to ASIO’s notice simply by doing something thought-provoking. As David McKnight put it: any challenge to Menzian conformism was suspect.

The major sponsors of the Margiis-planted-the-bomb theory have been ASIO and NSW Special Branch, who themselves are the alternative suspects for the crime. ASIO, Special Branch and the NSW police never investigated the possibility that the three murders were the result of their bungling and duplicity, which should have resulted in their abolition. They were keen to find someone else to blame and the Margiis became their target. To aid them, Special Branch’s allies in the "black knights" of the NSW police force (led by Roger Rogerson and his team in the Armed Hold-Up Squad) contributed two notorious frame-ups.

In her 2016 book, Who bombed the Hilton?, Rachel Landers revived the Margiis-planted-the-bomb theory after 25 years of quiescence that followed the discredited frame-up of Tim Anderson. She has a new Margii to frame who I shall call "Margii Five" because I deplore what she has done.

Before Dr Landers' "Margii Five" speculation, four Margiis have been accused of the bombing and three of them were framed – Tim Anderson (twice), Ross Dunn and Paul Alister – even Landers concedes this. The fourth, Evan Pederick, famously framed himself, inexpertly, incompetently, unbelievably.

Dr Landers claims to build ‘a compelling circumstantial case’ against Margii Five, but she achieves this by ignoring as much of the evidence as she can through an extraordinarily one-sided research strategy of only accepting what is in the Hilton Bombing files, released by the security forces. Dr Landers declares: 'When I made the decision to explore the Hilton bombing archive I also made a vow not to trust the living'.

Consequently, Landers did not interview anybody associated with the bombing: not even the surviving victims, or the twice-framed Tim Anderson, or any other Margii; not even the man she carelessly accuses of three murders. Neither did she interview Tom Molomby, nor any other member of Anderson’s defence team, because as the living, they were not to be trusted. The only evidence she accepts about the Hilton bombing comes from the files of ASIO and the other security police. Her publishers describe her work as a "forensic investigation" — more accurately it is better described as a forensic cherry-picking of the evidence.

With these files to misdirect her, Landers chases the Margiis-planted-the-bomb theory all over the planet, to Bangkok, to Manila, to Germany, to Canada, to India — from one red herring to the next. Like the security operation before her, she looks everywhere in the world while she ignores the bin outside the Hilton Hotel where the stinking truth lies.

Unlike Dr Landers, I have interviewed many of the key witnesses to the bombing. 27 years ago I attended the trial of Tim Anderson for the Hilton Hotel bombing. I reported on that trial for Rolling Stone and 4ZZZ, and subsequently wrote a book on the trial called The Incredible Exploding Man, which focussed on the unbelievable and self-proclaimed Hilton bomber, Evan Pederick.

No one believes Evan Pederick anymore because his story was so thoroughly discredited; he’s so last millennium now. But in the 1990s he was accepted by the police and the legal system and most of the media as the Hilton bomber. Who bombed the Hilton? In 1990, the mainstream media, the police and the courts all said it was Evan Pederick. He was the gold-plated witness, the "good" Margii who had confessed to the Hilton bombing and who was helping police convict the "bad" Margii, Tim Anderson, for being his accomplice.

His “memory” wasn’t a real memory. It was a delusional system, the memory of a fantasist. Because there was little in it that was solid or real, it possessed an extraordinary fluid dynamic. It was protean, constantly changing its shape as it flowed around the roadblocks of fact, possessed of an astonishing plasticity. You could train it to the shape you wanted, pruning the story as a gardener might shape a shrub; and this is what the prosecution did. The team of Aarne Tees and prosecutor Mark Tedeschi fought one of the most important court cases in Australian history, relying on the imaginings of a fantasist.

The crucial narrative in the Hilton Hotel bombing is the story of the fatal bin near the escalator at the George Street entrance of the Hilton Hotel in the 48 hours between the time when the bin was last emptied on 12.40 am Saturday, 11 February 1978 and the moment when the bomb exploded at 12.42 am Monday, 13 February 1978. The unusual events in the life of this bin are the clues that identify the murderers. The bin functions as a garbage collector, so it does stink — and it is not glamorous and it hides a truth some may prefer not to see.

That last weekend in the life of the fatal bin was exciting: a red carpet was rolled out towards it and limousines rolled up, disgorging prime ministers and presidents, while their political opponents waited with placards to protest under the all-seeing gaze of the media and the police. The bin was on all the TV news. Famous photos were taken of it: my favourite is the one that has a placard stuck in it that reads, ‘Politicians are the pus of a suppurating society’. 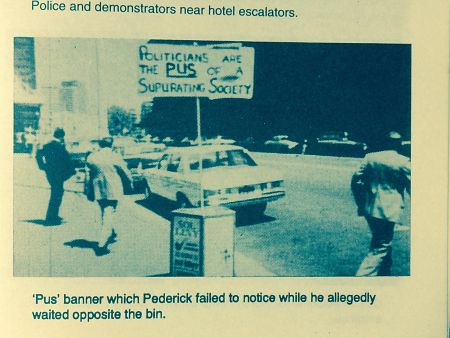 Photo via 'The Incredible Exploding Man', by Dr John Jiggens

The security around the bin that weekend was extensive because the Hilton was the venue for the Commonwealth Heads of Government Regional Meeting — one of the largest conferences of world leaders ever held in Australia. The security operation was the responsibility of the NSW policeman in charge, Superintendent Reg Douglas, while NSW Special Branch, headed by Inspector Colin John Perrin, played the major security role. In the immediate aftermath of the bombing, Douglas admitted he had made the decision that the garbage bins were not to be searched for bombs, even though this was specified in contemporary New South Wales police regulations. As well, military sniffer dogs, trained to detect explosives, whose services had previously been requested, were, for unknown reasons, withdrawn. No sniffer dogs! Not even looking in the bins! What did this say about the performance of the security operation, coordinated by the NSW Special Branch? Was it incompetence by a lazy bunch of police and intelligence agents or something more sinister?

At the Hilton trial, Phillip Morris, the controller of the Sydney Council cleaning department, testified that there were several garbage collection shifts scheduled for that weekend in February 1978: one about 12:40 am Saturday morning, which was the last collection not waved away, one about 6 am Saturday, the next at 2.30pm on Saturday afternoon, and a third at 6 am on Sunday morning.

The fatal collection, William Ebb’s truck, was blown up at 12.42am Monday. According to Ebbs, the police had prevented three earlier trucks from emptying the bin, even though it was overflowing with rubbish. His evidence was corroborated by the other garbage truck drivers.

Keith Snashall, who drove the 6 am rubbish collection, the truck previous to Ebb’s, was too sick to give evidence at the Hilton bombing trial. Instead, his evidence to the 1982 Hilton inquest was read at the trial, which confirmed that he was waved on. 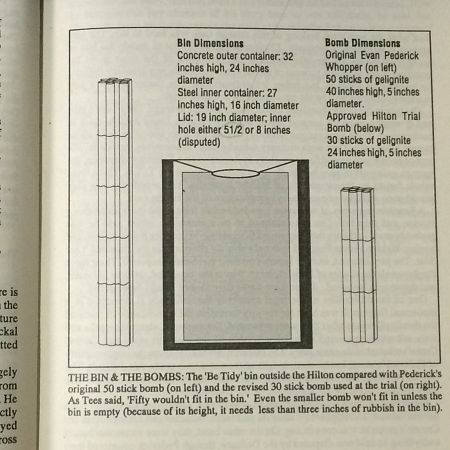 'The bin and the bombs' diagram via 'Framed: Campaign Exposing the Frame-up of Tim Anderson', CEFTA.

Neville Porter drove the previous garbage truck to Shashall’s, the 2.30 pm collection on Saturday afternoon. He testified that his truck was waved away from the bin outside the Hilton by the police. His shift could see the bin near the escalator and it looked full. Rubbish was protruding from the top and a newspaper was sticking out.

From its consequences, we know the bomb was very big. The blast was heard all over the CBD. Glass windows shattered all the way down George Street. The violence of the blast tore the garbage workers apart; their severed limbs were witnessed flying through the air. In the morning, the clean-up crew found bits of human flesh draped along George Street.

Beyond these horrifying details, we know virtually nothing about the bomb: it was undeniably big, big enough to kill three people and blow two of them apart. The police scientific branch initially reported that they did not believe the bomb was a land mine or plastic explosives. Samples were sent to laboratories to analyse but the results seem to have been lost. The remnants of the truck and all bomb fragments were subsequently dumped at an unrecorded location, preventing any new forensic evidence about the type of explosive used.

It is a peculiar pattern. Although one of their own was slain and two others were horribly injured, it appears the NSW police did not try very hard to solve the Hilton Hotel bombing murders.

6 January 2022, 11:00am The actions of the U.S., UK and Australia are imperiling the health of Julian ...
Join the conversation
comments powered by Disqus
News updates