Australia is immeasurably better off for having had a small window of genuine political leadership under the visionary leadership of Gough Whitlam, writes Warwick Smith.

MY EARLIEST CLEAR CHILDHOOD MEMORY is sitting on my dad’s shoulders in a huge crowd outside Parliament House in Canberra chanting “We want Gough!” over and over. I also remember sitting under the trees nearby sorting out my collection of badges – which I still have – one of which says ‘Export Fraser not uranium’, in the classic lefty protest tradition of mashing more than one cause into an event. This was late in 1975 in the immediate aftermath of the dismissal.

Fourteen years later, I started university, the first year that it was no longer free. These events bookend my brief, youthful love affair with the Australian Labor Party.

Gough Whitlam was a visionary leader. I think it’s fair to say he was the last visionary political leader this country has had. He didn’t dip his big toe in the political waters to check the temperature, he just took a running leap and bombed everyone in the pool — including those of his own party.

The list of reforms of the Whitlam government is quite unbelievable for such a short time in office.

Some of these reforms were small but significant in their symbolism — like selling the black Rolls Royce Commonwealth cars and replacing them with more modest white cars like those we see today. Some of the Whitlam reforms were momentous and truly shaped the future of the country, universal health care, land rights, free tertiary education and abolishing conscription being obvious examples.

It’s noteworthy that virtually none of Gough’s reforms were repealed by the Fraser Government and most continue as part of our political identity to this day.

After so many years in opposition, the Labor party were brimming with pent up plans for the country and were in a hurry to implement them — too much of a hurry perhaps. Whitlam polarised the nation as perhaps nobody since has done.

He also cast doubt upon our relationships with our grand old allies, the U.S. and UK.

He gave us a new national anthem to replace God Save the Queen. He abolished royal titles in Australia (that Abbott has now reinstated). He opened the question of whether or not Australia should host secret U.S. intelligence facilities, like Pine Gap. He ended conscription for the Vietnam War and ordered an end to Australian involvement in the U.S. orchestrated overthrow of the democratically elected government of Chile.

Never before or since has Australia so substantially chartered its own course with respect to significant international events.

I recently wrote a series of articles at The Guardian on the sorry state of our democracies. Most of the points I discussed in those pieces didn’t relate to the Whitlam Government.

Love them or hate them, you have to admit that they didn’t sail close to the political wind and they weren’t afraid to lead. They stated their aims and they implemented reforms to achieve them. Gough Whitlam had a powerful vision for a different Australia and he tried to lead Australia towards that vision. Despite the high speed train wreck that ended the Whitlam Government, to a very large extent they succeeded in radically reshaping the country to more resemble their vision.

I, for one, think our country is immeasurably better off for having had that brief period of genuine political leadership. I may have lost my love of the Australian Labor Party but I never lost my love of Gough — warts and all.

Warwick Smith is a research economist and freelance writer. He blogs at reconstructingeconomics.com and tweets @RecoEco.

Funeral preparations are being made for Gough Whitlam, with a public memorial service also to be held. http://t.co/3rMkQigP7e

Gough Whitlam's familiar voice on the radio at the moment> Listen in to this interview from 2005. https://t.co/Jg7sfHTCZD 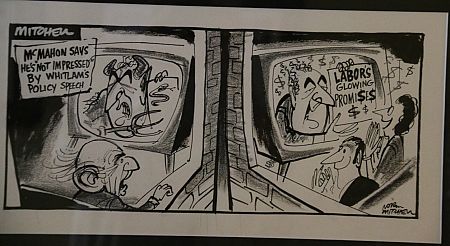 This reproduction from the original Norm Mitchell cartoon was kindly donated to IA, along with several others, by the owner — Paul Burns.