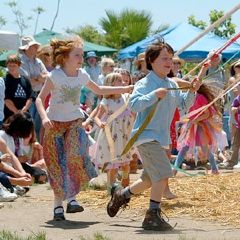 LIKE THOUSANDS of parents across the country, we recently sent our eldest child off on her first day of school. Nervous and excited, she is most looking forward to learning how to read.

It's lucky, then, that we haven’t sent her to one of the increasing number of public schools that offer dual streams: one of ‘conventional’ teaching and learning, and one based on the philosophies of early-twentieth century Austrian guru Rudolf Steiner. You see, among other non-evidence based practices, the Steiner system specifies that children should not be taught to read until they have cut their first adult tooth.

At first glance, the Steiner philosophy sounds attractive and innocuous enough. Play, art and creative activities designed to “nurture the senses” attempt to develop the hidden potential in a child. Anxious parents are told that in these “challenging times” of global warfare and violent crime, the mechanised mainstream education system lacks compassion and imagination, while the application of Steiner philosophies will create well-rounded, deep-thinking individuals.

All well and good, you might say. Who doesn’t want their kids to “savour their childhood”? However, digging a little deeper into the Steiner system reveals a hodge-podge of new age and religious ideas masquerading as education — ideas that clearly do not belong within a secular public education system.

There are currently six public schools in Victoria that offer a Steiner stream and no one will deny that many students who come out of the Steiner system are intelligent, decent people. Indeed, some of Steiner’s increased focus on movement, art and music may even be beneficial in a mainstream system.

However, it should immediately ring alarm bells when the Association representing more than half of the Steiner schools in Australia describes its main aim as the advancement of

Among his many theories, Steiner’s educational philosophy is based on the idea that child development can be divided into three essential phases. Up until the age of seven, children are said to have an intuitive sense of goodness and reverence. Activities such as beeswax modelling, mending, sweeping and baking are said to harmonise with the child’s natural rhythms.

According to the website steiner-australia.org, too early an intellectual awakening will weaken

'...the child’s vital forces, manifesting in frequent colds or other illnesses.'

Instead, teaching about letters, numbers, reading and writing is held off until the child’s “inherited physical body” has been remoulded into a new, self-created body and the child has been “reborn” — a time symbolised by the emergence of adult teeth.

From this time, children must write their own words and read their own writing before being allowed to work with printed literature. Never mind that evidence-based research shows that a rich literacy environment where children touch, hold and read from books are essential elements in developing literacy skills, a capacity for learning later in life and in shaping brain development.

It probably goes without saying that Steiner educators do not believe that children need to learn how to “push buttons on a computer” until the next stage of development (14 years+) because technology is believed to inhibit creative thinking. On the other hand, the study of the violin, viola or cello is compulsory from year 3.

Steiner school days begin and end with a verse in which students may thank God for various things, including planting the strength of human kind in their soul. Supporters, however, claim that the unspecified God mentioned is non-denominational and Steiner education is free from indoctrination.

According to Steiner’s writings:

'The Steiner educator sees the child as consisting of body, soul and spirit.'

Steiner believed that humans had three bodies: the physical, the astral and the etheric (a bit like an aura), which each develop at certain times in a child’s life. Even if you do not class these beliefs as religious, they certainly require a suspension of the rational.

Aside from education, Steiner also had some interesting ideas on other topics. The self-proclaimed “occultist” was responsible for the development of the complementary medical movement, Anthroposophical Medicine, which fused modern medicine with homeopathy and spiritual awareness. Steiner spoke of having direct experiences of clairvoyance, and of being able to see into the souls of children and read the future. While not necessarily supporting our conventional version of astrology, he believed in a connection between stars and human beings, and in reincarnation.

No one is arguing that parents shouldn’t have the right to educate their children within the philosophical framework of their choice. If some parents want their kids to learn that humans have existed on Earth since the creation of the planet (although not in a physical form) then that is their prerogative. There should be no place, however, for such poorly-researched, spiritually-based hocus-pocus within our secular public education system.

21 February 2013, 6:05pm There's no place for poorly researched spiritually based hocus pocus in the ...