The world's first minister for peace

Australia has had ministers for war, defence and everything else — so isn't it time we had our very first minister for peace? Contributing editor-at-large Tess Lawrence comments.

THE WORLD'S FIRST MINISTER FOR PEACE has been appointed by Australia's Prime Minister Malcolm Turnbull.

What's not wrong with this? Why not a minister for peace?

Wouldn't it be wonderful if all world governments had such a Cabinet portfolio?

After all, since Australia's first Prime Minister Edmund Barton presided over our first ministry in 1901, we have had comparable roles for ministers for defence, foreign affairs, trade and customs, and the attorney-general.

Separately, these roles might appear conflictory when in fact, they are entirely complementary.

The PM told us his was a cabinet for the 21st century.

In too many aspects, the 21st century is in a mess of our own making.  We have soiled out own nest. Poisoned our own well.

Putting aside any arguable merits or otherwise of Turnbull's appointees and exclusions, we are overdue for an intellectually tectonic shift in stereotypical political profiling and posturing.

Under the man spread, shirtfronting yoke of alfa male politics, reflected in the oppressive incommunicative and dictatorial leadership grunt of former PM Tony Abbott, our national political demeanour has become increasingly warped, causing injury to us both here and abroad, sullying both our reputation and credibility.

Soft diplomacy and bridge-building is heavily laced with the toxic tailings of first world hypocrisy. It's not a good look. We should at least take ownership of our own policies and misconduct.

The outsourcing of our moral and legal responsibilities both within Australia and offshore leaves our contemporary history again stained with the political excrement by a one time colony and coloniser.

We have felt both the sting of the lash and administered its sting upon others under our rule.

We have reverted to type, even to the extent of "recolonising" parts of former colonies and areas once under or now under our jurisdiction like Nauru, Christmas Island and Australia's nasty and malevolent version of Guantanamo Bay, Manus Island, expendiently turning them into penal colonies, emulating our own dark and cruelty ridden past.

Once again, the white man taketh and giveth away little of lasting consequence.

In an imbalance of power, need and greed, we bribe their governments with hundreds of millions of dollars in so-called "aid", its strings firmly attached to the barbed wire that surround these repugnant camps, concentrated with refugees and asylum seekers, many of them children.

THE PEOPLE UNFRIEND THE OLD PARTIES

Increasingly, the old parties are diminising in relevance. In many cases, we have unfriended them. We're just not that into them any more.

These parties were formed in another era and on all levels they have failed to evolve with the people.  They govern for the sake of the party and not for our sakes.

Barton's cabinet, formed the same year that Queen Victoria died, echoes in much of today's political construct and corridor.

The uber business of materiel warmongering aside, we are all surely vanquished in war.

The world loses. There are no real winners and to the faux victors go the spoils and the right to carve up the earth.

The aftermath of The Great War and the Second World War saw cartographers busily redrafting the borders, place names and geography of the world. Their work here is not yet done. Boundaries flow and ebb like the tides of refugees that float and drown in the ocean and limp across the land.

Often, quisling rulers and potentates were supported and/or imposed upon peoples and nations. Some of those regimes are still in place today, albeit precariously.

The DNA of today's quagmires of North and East Africa and the Middle East is directly linked to those sepia tinted wartime documents, signatures inked in blood.

Those old wars have proved to be never ending, propagating younger wars and bringing to the boil centuries old conflicts and simmerings.

War and peace are wedded to one another. It beggars belief that we humans so often choose war over peace. Time and again, our leaders – and others – seek military solutions to political and religious problems.

We mostly purport to be intelligent, sentient human beings, yet look at what we do to one another.

It is so easy to make war; so much harder to make peace.

Peace should not simply be summoned from the darkness when all else fails and the trenches are full of the dead of all sides and our villages and cities emptied of all life by grotesque and murderous butchery and rape.

Peace thrives on nurture and nature.

We have diligently applied our alleged superior intelligence to designing weaponry that allows a facilitator in one country to despatch a drone/pilotless aircraft to take out an enemy in another country whilst eating a take out hamburger. Inevitably, fries with that.

This lethal Game of Drones enables us to kill one another without getting blood or body parts splattered over us or our hamburgers. Nice one, humans.

We are overdue for optimistic leaders with courage, political nouse and calculated and intelligent daring. We need energetic and enthusiastic men and women capable of disrupting the dour brutalism of the political architecture of recent successive governments, whose collective motto reads "No we can't!" rather than "Yes, we can!"

Appointing a minister For peace would be a breathtaking gamechanger and influence global dynamics.

We can work with other countries and encourage them to follow suit.

The business of peace and peacemaking is arduous and painstaking work but it is its own reward.

It starts from ground zero and migrates to all age groups. To kids and kidlets, kinders and schools, colleges and corporations. There are dozens of programs, intitiatives and innovations that could be implemented to ensure more solid societal scaffolding of peace within all sectors including education, the environment, trade and commerce, agriculture, politics.

Before we reach the brink of annihilation and nihilism, the world's Ministers for Peace can meet to attempt to ameliorate incidents and restore open dialogue. There are easy question and uneasy answers yet to be given.

Britain invaded Australia on the back of the lie of terra nullius. And we who are not Indigenous, remain the seemingly sole beneficiaries of that lie.

Australia and the Coalition of the Willing, that included the goading puppeteers, the United States and the United Kingdom, invaded Iraq on the back of the lie of weapons of mass destruction, with continuing catastrophic impact, not only upon Iraq but the entire region.

Prime Minister Malcolm Turnbull has invited our views and feedback and to ask questions, give advice and pass on well-wishes. He should invite ideas as well.

I hope that prime minister is Malcolm Turnbull and that, among other things, he becomes known as the "prime minister for peace", who worked to prevent wars and not promulgate them, nor be goaded into them.

We need champions of the seemingly impossible to transform the possible into the probable.

The responsibility to work for peace should be part of the world's common and shared humanity. In this, we can all participate and not be mere bystanders.

Australia is no less a global citizen than any other nation.

The challenge of working for peace surely is such that we not only work to ensure we don't bully our way into finding our place in the world, but rather on this great and adventurous journey we also assist and reach out to other countries so that, in due course, we can all truly claim to be the first among equals. 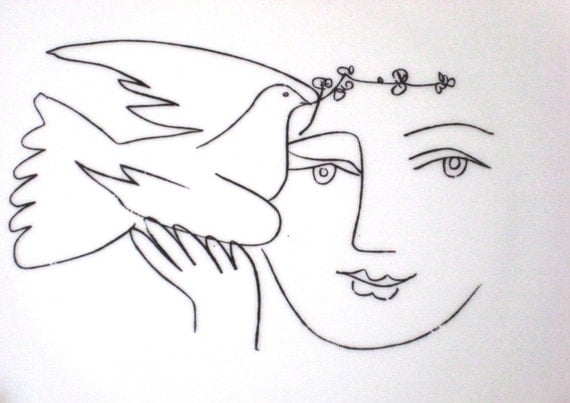 The original John Graham artwork featured at the beginning of this piece may be purchased from the IA store HERE.