The Union Royal Commission’s lack of transparency and frequent anomalies and inconsistencies will leave serious doubts about any report it ultimately delivers, writes Peter Wicks from Wixxyleaks.

If there is one thing that is important above all for any court in the land it is its integrity.

For this reason, there are laws and rules that are designed to protect the courts’ integrity as well as the integrity of those who serve the court.

For a Royal Commission, the same applies and there are specific rules, procedures and laws that need to be followed. These are there to protect the integrity of the Royal Commission as the public need to have faith in the integrity in what is the most respected and thorough public inquiry that can be held in this country.

That is why those who seek to ride roughshod over the rules, pervert the procedures and laugh at the law need to be held to account, as do those who allow this to happen.

The Trade Union Royal Commission is currently being made an absolute mockery of and is having its integrity systematically destroyed by a few individuals who by their actions have shown that they have no regard for the law whatsoever.

Today, I wanted to talk about a few of them.

Many have mentioned how weak the cross-examination of Kathy Jackson ended up becoming.

The Trade Union Royal Commission has a tight time schedule and knowing this it would appear that every desperate attempt to delay proceedings to avoid any decent cross-examination was used by Jackson.

We had the episode where Jackson claimed the Commission had “ambushed” her and she refused to answer questions, sought to have a taxpayer funded lawyer appointed to her and fled the witness stand.

Then came the excuse that her lawyer had not had enough time to go over the evidence and allegations in the statement of HSU Acting National President Chris Brown. This little tactic meant that any cross-examination would be weak as most of what Jackson was to be cross-examined on was now out of bounds. Then came the charity shag tactic where Jackson claimed she should not be cross-examined by the HSU National Offices lawyer Mark Irving as the two of them had been in a sexual relationship over 20 years ago when Kathy was on her first husband and Irving was clearly on something that impaired his judgement. This little stunt wasted valuable time on a day that had been set aside for Jackson to face what many other witnesses managed to face without the antics and theatrics.

The statement of the HSU acting national president Chris Brown is still only available in its heavily censored form and it has been suggested that this statement contains new and possibly even more damaging evidence against Jackson that she wishes to see suppressed as long as possible. The delay on releasing this statement in full has provided further evidence to many that Jackson may be receiving preferential treatment from the Commission.

It seems now that even if Brown’s statement is eventually made public it will be after the hearings are finished. This means it will be likely missed by many in the mainstream media and any coverage of Jackson appearing at the Commission to answer for these allegations on the news will no longer happen as she won't have to appear regarding them at all. How convenient.

It is clear to even the most casual of observers that Jackson has manipulated the Royal Commission to avoid answering questions under oath that she does not want to answer, and has sought to delay proceedings so that evidence she doesn’t want made public will be held back from public scrutiny by the Commission.

Meanwhile, Jackson’s partner, Fair Work Commission Vice President Michael Lawler, has been reported as allegedly barking insults and threats at two well respected journalists outside the Royal Commission’s hearing rooms during a break in proceedings. One would assume that Lawler, who has the legal standing of a Federal Court Judge, would use better judgement when attending a Royal Commission, however it seems not. I’m sure that given he would not expect this kind of behaviour in the Fair Work Commission’s courtrooms, so maybe the parliament should look at his position. After all, by behaving in this way, he clearly has no problem making a mockery of the man who appointed him to his position, Tony Abbott.

There is, of course, another man in Kathy Jackson’s life ‒ and I’m not talking about her apparent latest charity case who, according to The Australian, is living in her granny flat — I speak of course of Marco Bolano.

Bolano has been hard to miss at the Royal Commission due to his behaviour.

Bolano during recent proceedings is virtually shadowed by the Royal Commission’s security man, this is because his erratic behaviour has been hard to miss.

This week further allegations emerged regarding Bolano’s behaviour inside the Commission’s hearing room during witness testimony that I thought warranted attention.

I contacted the Commissions Director Media and Communications, Adrian Kerr to ask what action if any the Commission were thinking of taking regarding Bolano’s clear attempts to intimidate both media and witnesses.

The excerpt image below is linked to the full email exchange. I have placed the order of emails the right way around so you don't have to start at the bottom of the trail.

Excerpt from the email exchange between Peter Wicks and the TURC media director.

No official complaint? Did I dream my meeting, along with three other people, with TURC security? I don't think so.

If the Commission can’t stop this behaviour in its own hearing room how can anybody have any confidence it can stop it in the workplace?

In fact, when it comes to threats and actual attacks the Commission was quick to comment on another matter.

A lawyer who had appeared at the Royal Commission was bashed on Thursday night after she went out after the Commission hearing, this is a gutless crime bashing a woman in a car park at night.

However it is what came afterwards that highlights issues with the Commission itself.

On Friday an article ran in the Herald Sun regarding the incident.

The Royal Commission had provided an “exclusive” statement to the Herald Sun regarding the incident.

Firstly, what is the Commission doing giving exclusive statements to the Herald Sun? Surely any statement should be put up on their website publicly and released to all press at the same time. Or is the Royal Commission performing favours now?

The article went on to talk about the CFMEU and bikie gangs, seemingly implicating them in the bashing and also running a picture of protesters waving the CFMEU banner.

As it turns out, the crime was not related to the Royal Commission and certainly not the CFMEU or bikie gangs — it was just an unfortunate crime. 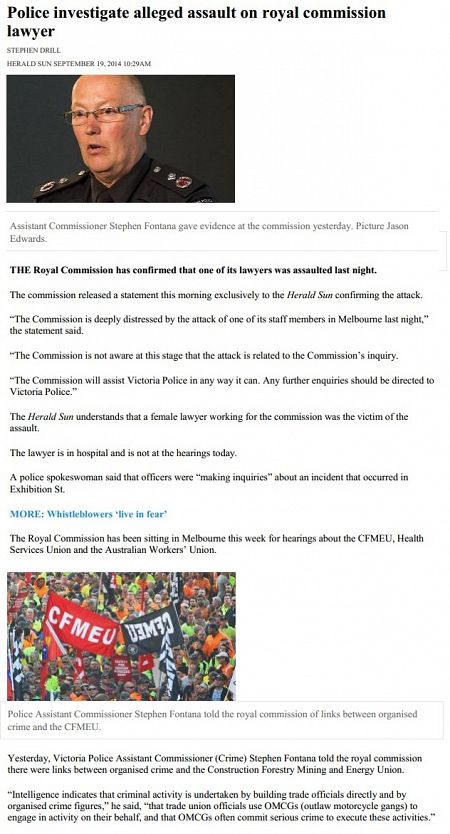 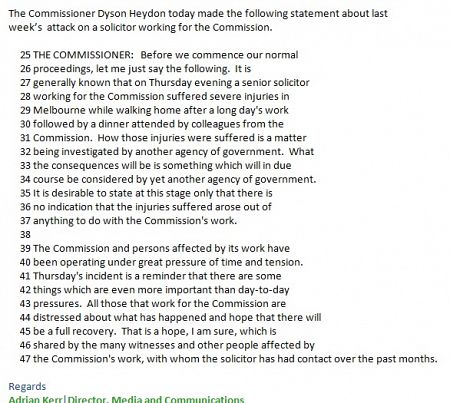 Statement released by the Commission today

I also wonder why the Royal Commission will not allow me to receive details on my own complaint due to whatever secrecy guidelines they operate on, yet are happy to provide exclusive statements to favoured news agencies on crimes that have no bearing on the Commission.

Tony Abbott told us that this Royal Commission was about shining a light, or a means of achieving transparency from the union movement.

As the previous email trail shows, I cannot even get a copy of my own complaint from the Commission — a complaint they have the audacity to deny I even made.

This hardly inspires any confidence in this particular Royal Commission regarding levels of transparency and honesty.

So what else are we not seeing?

The Commission calls for evidence and statements from witnesses and then collects them and goes through them.

Statements that the Commission feels suits their purposes are entered into evidence and made public, although often in a censored form like that of Chris Brown and Bruce Wilson. Other statements are not made public at all.

This censorship of material that should be publicly available is used by many to highlight the possibility of the Commission knowing its final findings before it even commences, picking the evidence that suits its own agenda and keeping the rest from the public eye lest they form a different opinion. Similar to the way the CFMEU was seemingly held to be responsible for a senseless crime in the aforementioned Herald Sun article.

I know of many people who have sent in witness statements that have yet to be made public and more than likely won’t in relation to the HSU matter.

With their authors’ permission I will publish any here that don’t receive the Commissions tick of approval. If any readers have one that they would like made public they can email them to me at wixxyleaks@gmail.com.

Ask yourself what it is that Tony Abbott and his Royal Commission doesn’t want you to know about.

Is this a Royal Commission that has being set up at a huge cost to the taxpayer purely to justify a preconceived outcome?

For someone like Commissioner John Dyson Heydon AC QC, who has had a distinguished career since being appointed to the bar in 1973 and appointed Queens Counsel in 1987, it must be a disappointment to have his proceedings made a mockery of by Jackson and her cronies this late in his career.

Counsel Assisting Jeremy Stoljar SC must also have concerns regarding his reputation after repeatedly being walked over and made to look weak by Kathy Jackson each time she found herself having to answer questions she wanted to avoid, when she would suddenly turn into a hostile witness and treat him with utter contempt.

Needless to say, this Royal Commission seems to be a targeted political attack that has well and truly missed its target.

The Commission’s actions and what it has chosen to not to act upon, the differing treatment of witnesses, the changing practice directions, and the transparency surrounding witness statements and evidence has given those who write legal textbooks enough for several chapters of material — perhaps under the headings: ‘Perversions of Legal Procedure’, or perhaps, ‘Using the law as a political tool’.

One thing is for sure, this Royal Commission won’t be mentioned under any heading of ‘Integrity’. 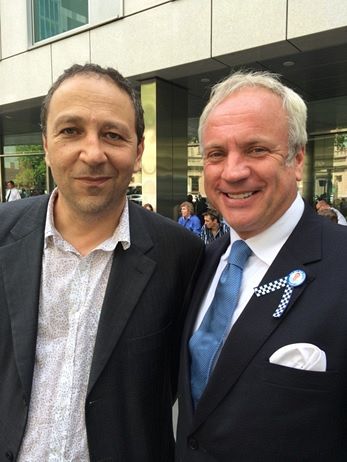