The Motorcycle Song of Aceh

A city in Indonesia is planning to ban women from straddling motorbikes behind male drivers. Contributing editor-at-large Tess Lawrence reports. 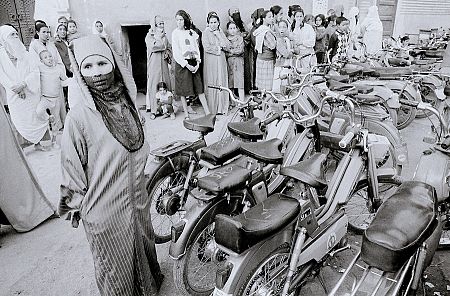 Q: What's red, hot and throbs between your legs?
A: A Honda.

Yep, it could be one of those corny Christmas cracker jokes and it could be true that years ago, recounting this joke just, before he signed off air, got an Australian DJ sacked from radio.

But it's no joke and it is true that a city in Indonesia's sole Sharia province, Aceh, is planning to introduce a bylaw forbidding women from straddling motorbikes behind male drivers.

Writing in yesterday's Jakarta Post, Bagus BT Saragih and Hotli (yes) Simanjuntak broke the story that has since done faster laps around the world than the new 'smooth as a baby's bum' track atPhillip Island.

Hitherto, few had heard of Lhokseumawe Mayor Suaidi Yahya who despite his surname has put the NoNo on what he describes as an “ improper “ practice.

He reckons women should sit sideways on motorbikes with their legs dangling to one side.

If Lady Godiva was alive, she'd probably agree with Yahya. She was a political activist who knew all about horsepower and is often depicted riding side saddle.

No wonder she was sent to Coventry.

We're told that the planned legs akimbo regulation has been discussed with local ulema (Islamic scholars) and many other parties, in much the same way, I imagine, as former Victorian Minister for Planning in Victoria, Justin Madden, occasionally conducted community consultation.


The mayor said that the ban would restore fading local values caused by poor morality and make it easier to differentiate women from men when riding pillion.

He said that the planned regulation could in fact uphold the dignity of women in the region.

Suaidi said that the administration would begin publicizing the proposed regulation next week.

“At the first phase, we will issue a circular on it. After a period of time, we will strengthen the circular [into] a regulation. Anyone who violates the regulation will face punishment,” he said.

The Post didn't say what sort of punishment violating women will face under the legislation. Stoning and limb excising are options in such thinking.

While he was at it, the Mayor also put women on notice about another ban Yahya was contemplating for women. On the wearing of denim.

He was quoted as saying:


“In Islam, women are not allowed to wear jeans.”

This is preposterous. Islam does not forbid women to wear jeans.

He ought to say:


“I, Suaidi Yahya, the Mayor of Lhokseumawe declare that women are not allowed to wear jeans.”

Thankfully, the Post asked Yuniyanti Chuzaifa, chairwoman of Komnas Perempuan ‒ the National Commission on Violence Against Women ‒ for her thoughts on the Mayor's intentions.

Not surprisingly, she was reported as slamming the plan, saying: 'it was prejudiced against women'.


“I cannot understand the aims of such a policy. Local government should focus more on providing protection and service to women who fall victim to violence and enhancing education for women instead.”

She was supported by lawmaker Eva Kasuma Sundari, who rightly pointed out the real dangers of sitting sideways on a motorcycle, making riders more vulnerable to accidents.


In Malaysia, pillion riders are obliged to straddle due to safety reasons. In this case, Malaysians are smarter than the Lhokseumawe administration,” she said.

“You cannot issue a policy only based on emotional sentiment that tends to be very subjective. A public policy must promote the protection of the public,” she added.

Women activists in Aceh have condemned the plan, calling it a lunatic proposal. “The way women ride a bike, how they speak and how they dress should not be the concern for the government,” Norma Manalu of Balai Syura Ureung Inong Aceh NGO.

Reminds me of Arlo Guthrie's The Motorcycle Song, sung too by Janis Joplin.

Oh yeah, one more thing. It's not always a Honda Mr Mayor.