It might look like something of a closed shop, but we need only look at recent AFL history to know that several teams are still well in the hunt to make finals, writes Ronny Lerner.

WHEN YOU have a glance at the top eight of the AFL ladder after nine rounds, it looks pretty settled.

It's hard to see any of the current top-eight sides not qualifying for the finals in just over three months, even though we're not even halfway through the 2021 season yet. However, if history is a good guide – and it so often is – then we should prepare for at least one change to the top-eight make-up between now and when the final siren sounds on round 23.

In nine of the last ten seasons, there has been at least one change to the top eight between round nine and when finals commence, with an average of 1.9 changes per year in that time.

Even last year, when round nine served as the halfway point of a shortened 18-round season, there was still one alteration with Greater Western Sydney (GWS) making way for Collingwood.

In the last ten years, season 2016 produced the only instance of the top eight consisting of the same teams as it did after nine rounds.

In a Twitter poll conducted earlier this week, only 58.1% of the 358 voters believe 2021's top eight is already set. The other 41.9% have seen this movie before. So which team, or teams, look vulnerable?

Well, it’s fair to say top-two sides Melbourne (Demons) – who remain undefeated – and the Western Bulldogs have already booked their September tickets. With 17 wins between them from a combined 18 games, they are well and truly the pace-setters of season 2021 — so far.

Both the Demons and Bulldogs face fellow top-eight sides six more times from their remaining 13 games, including a pair of blockbusters against each other, but with so many wins already in the bank, it would take a catastrophic injury crisis and/or form drop-off to see either side miss out on finals.

Geelong (Cats) and Brisbane Lions are also sitting pretty with 6-3 win-loss records. Both sides endured rusty starts to the season, but have dusted off the cobwebs to hit some fairly ominous form in recent times to presently reside in the top four.

The Cats have won four of their last five games; the Lions are enjoying an active five-game winning run. With a pair of Brownlow Medalists due to return to their respective line-ups in the next month or so, in Patrick Dangerfield and Lachie Neale, an unforeseen disaster could prevent either team from featuring in the finals.

Furthermore, Geelong and Brisbane only have five more engagements with top-eight teams in 2021, while the Cats have another six games at their home fortress Kardinia Park to look forward to — the Lions are hosting seven more matches at the Gabba.

Port Adelaide (Power) is also 6-3 but has looked off the pace in its three losses against fellow top-eight fancies West Coast, Brisbane and the Bulldogs — and only managed to squeak past a Richmond side that was far from firing on all cylinders, by just two points.

But while Port Adelaide's struggles against stronger teams say a lot about its premiership chances, that should have minimal bearing on its ability to qualify for finals because it has proven that the weaker bottom-10 teams are no match for the side (losing to the Power by an average margin of eight goals).

West Coast has also looked vulnerable at times this year, but the team still managed to put six wins on the board, including its last three in a row by an average of seven goals. To accomplish that with a star-studded medical ward, featuring the likes of Shannon Hurn, Jeremy McGovern, Liam Ryan, Liam Duggan, Luke Shuey and Elliot Yeo  – who are all expected to return at various stages throughout the year – has put West Coast in a very strong position to qualify for finals.

The Eagles have five more meetings against top-eight sides and another seven matches at their Optus Stadium home.

Richmond's season was teetering on the edge last Saturday night when the team trailed GWS by 28 points, but an incredible fightback, powered by superstar Dustin Martin, saw it clinch a memorable four-point win and keep its nose above water with a 5-4 record. 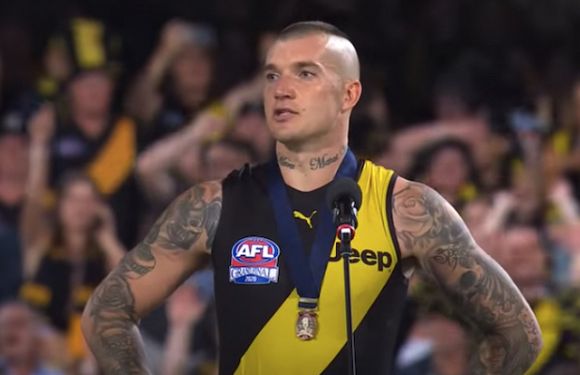 The Tigers might be in eighth spot, but with so much star power out of the team (Shai Bolton, Trent Cotchin, Shane Edwards, Kane Lambert and Dion Prestia), if they can ensure their win rate remains at or stays above 50% before the cavalry arrives, they will be well-placed to not only make the eight but also challenge for another premiership and complete an historic “three-peat”.

With only four more meetings with top-eight sides and another eight games at its beloved Melbourne Cricket Ground (MCG), coach Damien Hardwick’s side would be confident of finishing the season strongly, as it did in 2019 when it won its last 12 games.

This brings us to Sydney (Swans), the team that probably looks most likely to lose its spot in the top eight. The Swans started the year with a bang, winning their first four games, including stunning thumping victories against Brisbane and Richmond away from home — enough to spark chatter of them being a potential premiership threat. But things have cooled off a bit for the Swans since then, the team winning only two of five games, as their young players seem to be tiring a bit.

The good news for Sydney, though, is that it has already banked six wins in the opening rounds and it has just three more match-ups with top-eight sides while another six fixtures at the Sydney Cricket Ground (SCG) still await the team in 2021. With approximately 12 wins required to make finals, the Swans would like their chances.

So who can dislodge a team or two from the top eight? The most likely contenders would appear to be GWS (Giants), Fremantle (Dockers), St Kilda (Saints) and maybe Carlton (Blues). But the Blues are right up against it as they now need to win nine of their last 13 games to be any chance and their run home features four games against top-eight sides as well as match-ups with the Giants (twice), Freo and the Saints.

The Saints are 4-5, but with a whopping eight encounters with top-eight sides to come – as well as clashes with Carlton and Fremantle – their task is very hard, especially now with influential big man Rowan Marshall spending an extended stint on the sidelines alongside playmaking midfielder Zak Jones.

The Giants and Dockers are probably best-placed to launch a meaningful assault on snaring a finals spot. Like St Kilda, they’re both 4-5, but unlike the Saints, they both enjoy significant home ground advantages as non-Victorian clubs.

GWS has six more games at Giants Stadium and Fremantle has eight more in Perth, but their paths are treacherous ones. The Giants still have seven meetings with top-eight sides to come, as well as a pair of encounters with the Blues, while the Dockers have to contend with eight more match-ups against top-eight sides on top of meetings with St Kilda and Carlton.

However, both clubs have had to contend with an incredibly large injury toll to several key players, so if they’re able to regain the services of the majority of them, that would help their cause significantly.

The top eight is already looking something of a closed shop, but teams nipping at the heels of those seemingly finals-bound sides need only take a look at recent history to know that they are still well and truly in the hunt.